While the Door Was Locked is a 1946 Swedish drama film directed by Hasse Ekman.

Hoppet may refer to:

Göran Gentele was a Swedish actor, director, and opera manager. He was briefly the general manager of the Metropolitan Opera in New York City in 1972. 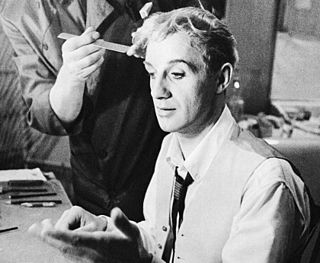 Jarl Lage Kulle was a Swedish film and stage actor and director, and father of Maria Kulle.

Hjördis Olga Maria Petterson was a Swedish actress. She has appeared in more than 140 films. She was born in Visby, Sweden and died in Stockholm.

Two Women is a 1947 Swedish drama film directed by Arnold Sjöstrand. It was entered into the 1947 Cannes Film Festival.

Miss April is a 1958 Swedish comedy film directed by Göran Gentele. It was entered into the 1959 Cannes Film Festival. 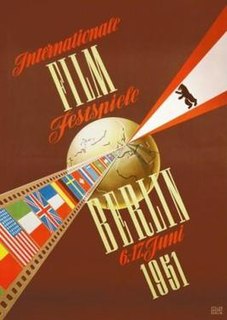 The 1st annual Berlin International Film Festival was held from 6 to 17 June 1951. The opening film was Alfred Hitchcock's Rebecca. At this very first Berlin Festival, the Golden Bear award was introduced, and it was awarded to the best film in each of five categories: drama, comedy, crime or adventure, music film, and documentary. This system disappeared already the following year, partly because films that year were voted on by the audience.

Arne Ragneborn was a Swedish actor, film director and screenwriter. He appeared in 23 films between 1944 and 1976.

Olav Riégo was a Swedish film actor. He appeared in 92 films between 1923 and 1956. He starred in the film Leva på 'Hoppet', which won the Silver Bear (Comedies) award at the 1st Berlin International Film Festival.

Elsa Margareta "Meg" Westergren is a Swedish actress from Nockeby, Bromma, in Stockholm. Her parents were both actors and she made her acting debut in the 1951 film Leva på 'Hoppet'. She studied at The Royal Dramatic Theatre's acting school from 1951 to 1954, and became a successful comedic theater actress afterwards. Westergren has been married twice and has one son.

Meeting in the Night is a 1946 Swedish film directed by Hasse Ekman. The film stars Ekman, Eva Dahlbeck and Ulf Palme.