Tore Svensson (6 December 1927 – 26 April 2002) was a Swedish football goalkeeper who played for Malmö FF. He also represented Team Sweden in the 1950 and 1958 FIFA World Cups in Brazil respectively Sweden. [1]

The 1938 FIFA World Cup was the third edition of the World Cup, the quadrennial international football championship for senior men's national teams and was held in France from 4-19 June 1938. Italy defended its title in the final, beating Hungary 4–2. Italy's 1934 and 1938 teams hold the distinction of the sole World Cup champions under the same coach, Vittorio Pozzo.

The 1958 FIFA World Cup was the sixth FIFA World Cup, and was played in Sweden from 8 to 29 June 1958. It was the first FIFA World Cup to be played in a Nordic country. Brazil beat Sweden 5–2 in the final in the Stockholm suburb of Solna to claim their first title. The tournament also marked the arrival of a then 17-year-old Pelé on the world stage.

A total of 34 teams entered the qualification rounds of the 1950 FIFA World Cup, competing for a total of 16 spots in the final tournament. Brazil, as the hosts, and Italy, as the defending champions, qualified automatically, leaving 14 spots open for competition. 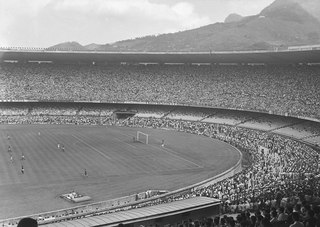 Uruguay v Brazil was the decisive match of the final group stage at the 1950 FIFA World Cup. The match was played at the Estádio do Maracanã in the then-Brazilian capital of Rio de Janeiro on 16 July 1950. Unlike other World Cups, the 1950 winner was determined by a final group stage, with the final four teams playing in round-robin format, instead of a knockout stage. With Brazil topping the group at one point ahead of Uruguay going into the match, Uruguay needed a win while Brazil needed only to avoid defeat to claim the title of world champions. Neither of the other two teams, Spain and Sweden, could finish first.

The following are the football (soccer) events of the year 2002 throughout the world.

The following are the football (soccer) events of the year 1950 throughout the world.

Seventeen countries have been FIFA World Cup hosts in the competition's twenty-one tournaments since the inaugural World Cup in 1930. The organization at first awarded hosting to countries at meetings of FIFA's congress. The choice of location was controversial in the earliest tournaments, given the three-week boat journey between South America and Europe, the two centers of strength in football at the time. 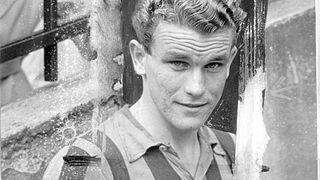 Hans "Hasse" Jeppson was a Swedish football striker. He was known for his impressive goals to games ratio at several clubs. Most of his career was spent with Napoli in Italy. Jeppson also played for Sweden and helped them to a third-place finish in the 1950 FIFA World Cup.

Juan López Fontana was a Uruguayan professional football manager who won the 1950 FIFA World Cup as the head coach of the Uruguay national team.

This article summarizes the results and overall performance of Brazil at the FIFA World Cup.

Gustav Ingvar Rydell was a Swedish football forward who played for Malmö FF. He also represented Team Sweden in the 1950 FIFA World Cup in Brazil. and won a bronze medal at the 1952 Summer Olympics in Finland.

The Brazil–Uruguay football rivalry, also known as El Clásico del Río Negro, or Clássico do Rio Negro, is a highly competitive sports rivalry between the Brazilian and Uruguayan national football teams, and their respective set of fans. Association football is the most popular sport in both countries and they have a combined 7 FIFA World Cups and 24 Copa Américas between them. Both countries also have a very close proximity and border each other, Uruguay only has a population of 3.5 million and has a size of 176,215 km2, while Brazil has a population of 210 million and a size of 8,515,767 km2, making it the 5th largest country in terms of both population and size.