The Torekkadae or Toreccadae (Greek: Τορεκκάδαι) are an ancient tribe mentioned by Ptolemy (iii. 5. § 25) as dwelling in European Sarmatia. William Smith tentatively identifies them with the Toreatae.

Agora was an ancient town situated about the middle of the narrow neck of the Thracian Chersonese, and not far from Cardia, in what is now European Turkey. Xerxes, when invading Greece in 480 BCE, passed through it. It was a member of the Delian League.

Seleucia Sidera, also transliterated as Seleuceia, Seleukeia, and later known as Claudioseleucia, Greek Klaudioseleukeia, was an ancient city in the northern part of Pisidia, Anatolia, near the village of Bayat, near Atabey, about 15 km north-northeast of Isparta, Isparta Province, in the Mediterranean Region of Turkey.

Antigonia also transliterated as Antigonea and Antigoneia was a Hellenistic city in Seleucid Empire, Syria, on the Orontes, founded by Antigonus I Monophthalmus in 307 BC, and intended to be the capital of his empire; the site is approximately 7 km northeast of Antakya, Hatay Province, Turkey. After the Battle of Ipsus, 301 BC, in which Antigonus perished, the inhabitants of Antigonia were removed by his successful rival Seleucus I Nicator to the city of Antioch, which Seleucus founded a little lower down the river. Diodorus erroneously says that the inhabitants were removed to Seleucia Pieria. Antigonia continued, however, to exist, and is mentioned in the war with the Parthians after the defeat of Crassus. 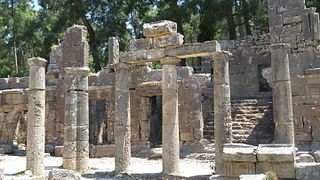 Lyrbe was a city and episcopal see in the Roman province of Pamphylia Prima and is now a titular see.

Tium was an ancient settlement, also known as Filyos, on the south coast of the Black Sea at the mouth of the river Billaeus in present-day Turkey. Ancient writers variously assigned it to ancient Paphlagonia or Bithynia.

Although William Smith's Dictionary of Greek and Roman Geography (1854) said that the Synecdemus of Hierocles mentions four towns in Asia Minor called Eudocia, including one in Cappadocia, the text of the Synecdemus as edited by Gustav Parthey in 1866 mentions no town of that name or of any similar name among the Cappadocian towns.

Metropolis was an ancient town in the north of Phrygia, and, as the name seems to indicate, a capital of the ancient kings of Phrygia, though Stephanus of Byzantium derives the name from the mother of the gods. It was situated to the north of Synnada, and must not be confounded with another town of the same name in the south of Phrygia. Its site is, in all probability, indicated by the ruins of Pismesh Kalasi, north of Doganlu, which show a very antique style of architecture, and mainly consist of tombs cut into the rocks; one of these tombs is that of king Midas. Although William Martin Leake is inclined to think that these ruins mark the site of Nicoleia; William Smith credits other travelers who identify them with Metropolis. From the extent of the ruins, it would seem that in the time of the Roman emperors Metropolis was an important town; but afterwards it declined, though it is still mentioned by Hierocles.

Chalcetor or Chalketor was a town of ancient Caria. Strabo says that the mountain range of Grion is parallel to Latmus, and extends east from the Milesia through Caria to Euromus and the Chalcetores, that is, the people of Chalcetor. In another passage, Strabo names the town Chalcetor, which some writers have erroneously altered to Chalcetora. It was a member of the Delian League.

Siderus was a port town of ancient Lycia, referenced in the Periplus of Pseudo-Scylax and the Stadiasmus Maris Magni. The town is also noted by Stephanus of Byzantium under the name Sidarus or Sidarous (Σιδαροῦς). The place may also have borne the name Posidarisus or Posidarisous, mentioned in The Chronicon of Hippolytus as being 30 stadia from Crambousa and the same distance from Moron Hydor.

Gergitha or Gergetha, also known as Gergina and Gergithus, Gergithium or Gergithion, was a town in ancient Lydia, near Stratonicea, at the sources of the Caicus River, said to have been peopled by the inhabitants of Gergis in the Troad by King Attalus of Pergamus.

Carambis or Karambis was an ancient Greek city of ancient Paphlagonia, on a promontory of the same name. The town is mentioned in the Periplus of Pseudo-Scylax and by Pliny the Elder. The name occurs as Carambas in the Peutinger Table.

Stephane was a small port town on the coast of ancient Paphlagonia, according to Arrian 180 stadia east of Cimolis, but according to Marcian of Heraclea only 150. The place was mentioned as early as the time of Hecataeus of Miletus as a town of the Mariandyni, under the name of Stephanis (Στεφανίς). The town is also mentioned in the Periplus of Pseudo-Scylax and by the geographer Ptolemy. The name is written Stefano in the Peutinger Table.

Mandane was a town on the coast of ancient Cilicia, between Celenderis, and Cape Pisidium or Posidium, from which it was only 7 stadia distant. William Smith conjectured it to be the same place as the Myanda or Mysanda mentioned by Pliny the Elder; and if so, it must also be identical with the town of Myus (Μυούς) mentioned in the Periplus of Pseudo-Scylax between Nagidus and Celenderis. Modern scholarship does not accept the identity.

Ochras was a town of ancient Cappadocia mentioned by the Antonine Itinerary. Ptolemy mentions a place Odogra or Odoga, in the district of Chammanene in Cappadocia, between the Halys River and Mount Argaeus, which William Smith conjectured was possibly the same as Ochras. Modern scholars do not accept the equivalence.

Nicopolis or Nikopolis was an inland town in the extreme east of ancient Cilicia, inhabited during Hellenistic, Roman, and Byzantine times. It was founded near the site of the Battle of Issus, and is mentioned by numerous ancient writers.

Pida, or Pidae or Pidis, was a town of ancient Pontus, inhabited during Roman and Byzantine times. It was in the later province of Pontus Galaticus, on the road leading from Amasia to Neocaesareia.