Torfnesvöllur (Icelandic pronunciation: ​ [ˈtʰɔrvˌnɛːsˌvœtlʏr̥] ), known as Olísvöllurinn [ˈɔːlˌiːsˌvœtlʏrɪn̥n̥] for sponsorship reasons, is a football stadium in Ísafjörður, Iceland [1] and the home of Vestri and Knattspyrnufélagið Hörður. [2] It broke ground in 1963 [3] and was opened on 18 July 1964. [4] 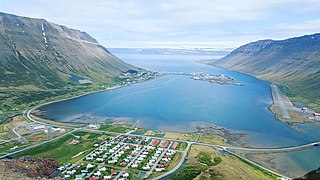 Eagle Air is an Icelandic airline. It is based at Reykjavík Airport and offers domestic flights, charter services, and adventure tours in Iceland.

Flateyri is a village situated in Iceland's Westfjords. It is part of the municipality of Ísafjarðarbær and has a population of approximately 200, making it the largest settlement in Önundarfjörður. 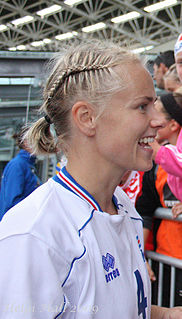 Edda Garðarsdóttir is an Icelandic football coach and former player who last managed Úrvalsdeild club KR. Since her debut in 1997 she has accrued over 100 caps for Iceland's national team and competed at the UEFA Women's Euro 2009 finals in Finland.

Ólína Kjerúlf Þorvarðardóttir was a member of the Althing, representing the Social Democratic Alliance for the Northwest Constituency from 2009 to 2016.

Íþróttarhúsið á Torfnesi, known colloquially as Jakinn[ˈjaːcɪn̥n̥] or Ísjakinn[ˈiːsˌjaːcɪn̥n̥], is a multi-purpose indoor arena in Ísafjörður, Iceland. It is the homecourt to Íþróttafélagið Vestri and Knattspyrnufélagið Hörður but also hosts several other events every year.

Íþróttafélagið Grótta is an Icelandic sports club based in the town of Seltjarnarnes, in the Capital Region. The club is best known for its women's handball team that won the national championship in 2015 and 2016, but also has departments for gymnastics, football and powerlifting.

Reynir Gísli Karlsson was an Icelandic football manager and player. He managed the Icelandic men's national football team in 1967.

Samúel Kári Friðjónsson is an Icelandic professional footballer who plays as a midfielder for Viking and the Iceland national team.

Daníel Jakobsson is an Icelandic cross country skier. He competed at the 1994 Winter Olympics in 15–50 km events and placed 44–65.

Björn Helgason is an Icelandic former footballer who played as a midfielder or forward. He is a former member of the Icelandic men's national football team.

Agla María Albertsdóttir is an Icelandic footballer who plays as a midfielder for Breiðablik in the Úrvalsdeild kvenna the top-tier women's football league in Iceland. She has won the Icelandic championship twice, in 2016 and 2018, and the Icelandic Cup once, in 2018.

Knattspyrnufélagið Hörður, commonly known as Hörður or Hörður Ísafjörður, is an Icelandic multi-sport club from the town of Ísafjörður. It was founded in 1919 as a football club but since 1933 it has fielded other departments, most prominently in handball, track & field, skiing and Icelandic wrestling.

1. deild karla, also known as Grill 66 deild karla for sponsorship reasons, is the second-tier men's handball competition among clubs in Iceland. It is managed by the Icelandic Handball Association. The current champions are Fjölnir.

Menntaskólinn á Ísafirði is an Icelandic gymnasium. It is located in Ísafjörður in the Westfjords.