Last updated May 07, 2021
Granite dome in Brønnøy, Nordland, Norway
This article is about the mountain in Brønnøy. For the transport company, see Torghatten ASA.

Torghatten is a granite dome on the island of Torget in Brønnøy Municipality in Nordland county, Norway. It is known for its characteristic hole, or natural tunnel, through its center. [1] It is possible to walk up to the tunnel on a well-prepared path, and through it on a natural path.

For the cargo ship notable for having seen active service in both world wars, see SS Hestmanden.

According to legend, the hole was made by the troll Hestmannen while he was chasing the beautiful girl Lekamøya . As the troll realized he would not get the girl, he released an arrow to kill her, but the troll-king of Sømna threw his hat into the arrow's path to save her. The hat turned into the mountain with a hole in the middle.[ citation needed ]

Preikestolen or Prekestolen is a tourist attraction in the municipality of Strand in Rogaland county, Norway. Preikestolen is a steep cliff which rises 604 metres (1,982 ft) above Lysefjorden. Atop the cliff, there is an almost flat top of approximately 25 by 25 metres. Preikestolen is located near the Western part of the fjord, and on its North side.

Ørsta (help·info) is a municipality in Møre og Romsdal county, Norway. It is part of the Sunnmøre region of Western Norway. The administrative centre of the municipality is the village of Ørsta. Other villages in the municipality include Hovdebygda, Flåskjer, Liadal, Urke, Barstadvik, Åmdalen, Follestaddalen, Nordre Vartdal, Vartdal, Sæbø, Sætre, Store-Standal, and Ytre Standal.

Aurland is a municipality in the county of Vestland, Norway. It is located on the south side of the Sognefjorden in the traditional district of Sogn. The administrative center is the village of Aurlandsvangen. Other villages include Bakka, Flåm, Undredal, and Gudvangen.

Bindal is a municipality in the Helgeland region in the extreme southwest part of Nordland county, Norway. The administrative centre is the village of Terråk. Other villages include Bindalseidet, Holm, Vassås, Horsfjord and Åbygda.

Brønnøy is a municipality in Nordland county, Norway. It is part of the Helgeland region. The administrative centre and commercial centre of the municipality is the town of Brønnøysund.

Brønnøysund is a town and the administrative centre of Brønnøy Municipality in Nordland county, Norway. It is also a former municipality within Nordland county. The village of Brønnøysund originally was declared a ladested in 1923 which made it an independent municipality. After merging with Brønnøy in 1964, it lost its town status. Then in 2000, it once again received town status. The town lies along the coast and is often called "the coastal town in the middle of Norway." Brønnøysund is also the regional center of Southern Helgeland.

Helgeland is the most southerly district in Northern Norway. Generally speaking, Helgeland refers to the part of Nordland county that is located south of the Arctic Circle. It is bordered in the north by the Saltfjellet mountains and Svartisen glacier, which form a natural border with the Salten district. In the south, Helgeland borders Trøndelag county.

The Brønnøysund Bridge is a cantilevered road bridge near the town of Brønnøysund in Brønnøy municipality in Nordland county, Norway. The bridge was constructed in 1979 and it connects the small island of Torget with the mainland just south of Brønnøysund. The 550-metre-long (1,800 ft) bridge has a maximum clearance to the sea of 30 metres (98 ft). It consists of 20 spans, the longest of which is 110 metres (360 ft). The bridge deck is made of pre-stressed concrete. 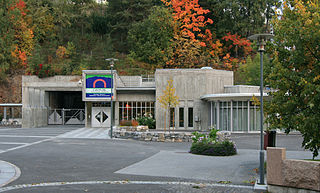 Gjøvik Olympic Cavern Hall is an ice hockey rink located within a mountain hall in Gjøvik, Norway. With a capacity for 5,500 spectators, the hall also features a 25-meter swimming pool and telecommunications installations. Opened in 1993 and costing 134.6 million Norwegian krone (NOK), it was built for the 1994 Winter Olympics, where it hosted 16 ice hockey matches. It is the home of Gjøvik Hockey, has hosted the 1995 World Short Track Speed Skating Championships and is also used as an event venue. The structure is the world's largest cavern hall for public use.

Brønnøysund Airport, Brønnøy is a regional airport located at the town of Brønnøysund, in the municipality of Brønnøy, Nordland county, Norway. The airport is owned and operated by the state-owned Avinor and serves the southern part of Helgeland. It has a 1,200-by-30-meter runway numbered 04–22 and is served by Widerøe, which operates their Bombardier Dash 8 aircraft to Oslo, Trondheim, Bodø, Bergen and other airports in Helgeland. The airport also serves offshore helicopter flights by CHC Helikopter Service to Norne and temporary oil rigs in the Norwegian Sea. In 2014, the airport served 117,471 passengers, making it the second-busiest regional airport in Norway, after Florø Airport.

The Sulitjelma Line was a railway line that ran between Finneid in the town of Fauske to the village of Sulitjelma near the border with Sweden. The railway line was entirely inside the municipality of Fauske in Nordland county, Norway. The line was built in 1891, over time it was lengthened until 1958 when it was connected to the Nordland Line and the sea port at Finneid. It existed as a branch of the Nordland Line from 1958 until 1972 when the line was closed and removed. The railway line followed the path of the present-day Norwegian County Road 830.

Tafjorden is an inner branch of the Norddalsfjorden/Storfjorden in Fjord Municipality in Møre og Romsdal county, Norway. It is part of the UNESCO World Heritage Site West Norwegian Fjords. The fjord is located southeast of the village of Sylte, the municipal center of Norddal Municipality. The small village of Tafjord is located at the end of the 12-kilometre (7.5 mi) long Tafjorden. The only road leading to the rather isolated village of Tafjord goes through the 5,277-metre (3.3 mi) long Heggur Tunnel plus several other smaller tunnels on the northern shore of the fjord.

Widerøe Flight 710, commonly known as the Torghatten Accident, was a controlled flight into terrain into the mountain of Torghatten in Brønnøy, Norway. The Widerøe-operated de Havilland Canada Dash 7 crashed on 6 May 1988 at 20:29:30 during approach to Brønnøysund Airport, Brønnøy. All thirty-six people on board LN-WFN were killed; the crash remains the deadliest accident of the Dash 7 and the deadliest in Northern Norway. The direct cause of the accident was that the aircraft had descended from 500 meters to 170 meters (1,500–550 ft) at 8 nautical miles instead of 4 nautical miles from the airport.

Norwegian County Road 63 is a Norwegian county road in Møre og Romsdal county and a very small part in Innlandet county, Norway. It begins at Norwegian National Road 15 along the lake Langvatnet in Skjåk Municipality in Innlandet county and it heads north where it ends at the junction with the European route E136 highway near the town of Åndalsnes in Rauma Municipality, Møre og Romsdal county. The route runs for 103.6 kilometres (64.4 mi) including a single ferry crossing over the Norddalsfjorden. The vast majority of the road is in Møre og Romsdal county, only the southernmost 2.5 kilometres (1.6 mi) lie in the extreme western part of Innlandet county. Both the Langvatnet–Geiranger and Trollstigen sections of the road are closed during winter and spring due to the weather conditions. The road passes by a number of notable landmarks, which has led to the earmarking of the route as national tourist route. 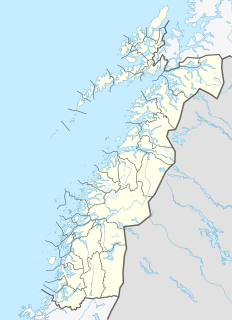 Trælnes is a village in the municipality of Brønnøy in Nordland county, Norway. The village is located along the Norwegian County Road 17 and along the Torgfjorden, just north of the village of Berg and east of the mountain Torghatten. The Trælnes Chapel is located in this village.

Trollgarden is a glacial moraine in the municipality of Hjelmeland in Rogaland county, Norway. The moraine is a 5-metre (16 ft) tall ridge of stones, rocks, and boulders that runs for about 2 kilometres (1.2 mi) from the east side of the lake Kvivatnet across the moorland to the northern side of the mountain Brendeknuten in the Hjelmelandsheiane mountains. The name "Trollgarden" is translated to English as The Troll's stone fence since it looks like a rock wall that a troll may have built around its farm. The ridge sits about 8 kilometres (5.0 mi) southeast of the village of Jøsenfjorden and about 25 kilometres (16 mi) northeast of the village of Hjelmelandsvågen.

Torget is an island in Brønnøy Municipality in Nordland county, Norway. The 16.4-square-kilometre (6.3 sq mi) island lies just off shore from the town of Brønnøysund on the mainland. It is connected to Brønnøysund by the Brønnøysund Bridge. There were 815 residents living on the island in 2015.