Island Falls is a town in Aroostook County, Maine, United States. The population was 837 at the 2010 census. Island Falls took its name from an island in the stream at the verge of a waterfall.

Caernarvon Township is a township in northeastern Lancaster County, Pennsylvania, United States. For the 2010 census the population was 4,748.

Paradise Township is a settlement in York County, Pennsylvania, in the United States. As of the 2010 census, the township population was 3,766.

Penn Township is a township in York County, Pennsylvania, United States. The population was 15,612 at the 2010 census.

Leon is a town in Mason County, West Virginia, United States, along the Kanawha River. The population was 158 at the 2010 census. It is part of the Point Pleasant, WV–OH Micropolitan Statistical Area. 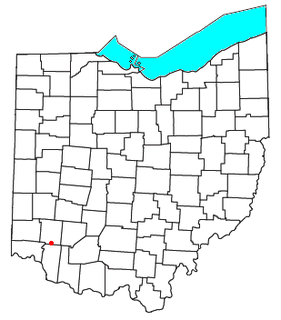 Cozaddale is an unincorporated community in southeastern Hamilton Township, Warren County, Ohio, United States. It is about one mile south of Comargo, one mile southeast of Hickory Corner, and two miles west of Pleasant Plain, and three miles north of Goshen, Ohio.

Pearson, named for Dr. Frederick Stark Pearson, is an unincorporated community in Medina County, Texas, United States. It is part of the San Antonio Metropolitan Statistical Area. Pearson was established in 1912 by the Medina Valley Irrigation Company as a stop on the Southern Pacific Railroad. The community lies approximately seven miles west of LaCoste on FM 471 South and before the Noonan Switch and Natalia. It was formerly the site of a shop, a machinery and material yard, and a house for a caretaker. The proposed townsite was never developed.

Shoreham-by-Sea railway station serves the town of Shoreham-by-Sea in the county of West Sussex, and also serves the nearby Shoreham Airport. The station and the majority of trains serving it are operated by GTR, primarily under its Southern brand, but also as Thameslink. The other operator to serve the station is Great Western Railway.

The White Beeches Golf and Country Club is located in Haworth, New Jersey and features 18 holes of golf. It has hosted U.S. Open sectional qualifiers, Met Open qualifiers, and the State Open.

Conodoguinet Creek is a 104-mile-long (167 km) tributary of the Susquehanna River in South central Pennsylvania in the United States. The name is Native American, and means "A Long Way with Many Bends". 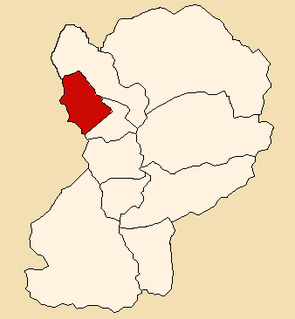 The Santo Toribio District is one of 10 districts of the Huaylas Province in the Ancash Region of Peru. The capital of the district is the village of Santo Toribio.

Rising Sun is an unincorporated community in the town of Utica, in Crawford County, Wisconsin, United States.

Gringo is an unincorporated community in Hopewell Township, Beaver County, Pennsylvania, United States. It is located along Pennsylvania Route 151, near the border with Raccoon Township. The area was the site of an oil field in the late 19th and early 20th centuries; there was at least one functioning well operating until the 1960s. The community has disappeared from most contemporary maps, but lives on in the name of Gringo Road and a few business names.

Argyle Park is an area near North Central bounded by East Hudson Street on the north, Woodland Avenue on the east, East 17th and East 26th avenues on the south, and Billiter Boulevard on the west.

Aetna Township is a civil township of Missaukee County in the U.S. state of Michigan. As of the 2010 census, the township population was 413. 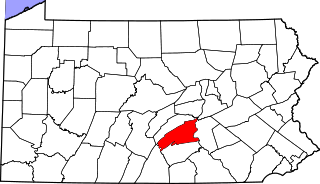 Perdix, Pennsylvania is a village between the Susquehanna River and Cove Mountain in Penn Township, Perry County. U.S. Route 11/15 passes through the village, which uses the Duncannon zip code of 17020.

San Mateo de Otao is one of the 32 districts of the Huarochirí Province in the Lima Region. The district was created by order of the law Nº 10001 on November 7, 1944 and its capital is San Juan de Lanca. It has 7 villages:

The Arsenal de Rochefort was a French naval base and dockyard in the town of Rochefort. It was founded in 1665 and it was closed in 1926.

Vega is an unincorporated community in Bloomfield Township, Jackson County, Ohio, United States. It is located southeast of Jackson along U.S. Route 35 at the intersection of Ebb-Tomblin Road and Vega Road, at 38°57′29″N82°29′50″W.