Toribiong is a surname. Notable people with the surname include: 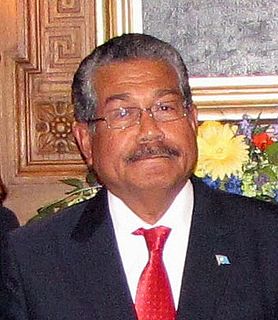 Marina Toribiong is a Palauan canoeist. She competed in the women's K-1 200 metres event at the 2016 Summer Olympics where she ranked 6th in the heat round and 8th in the semifinals. She did not advance to the final. Toribiong also competed in the K-1 500 metres event where she finished in 7th place in the heat round. She did not advance to the semifinals. 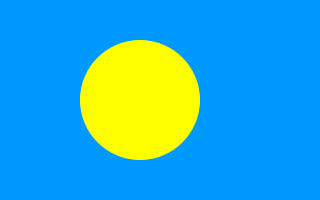 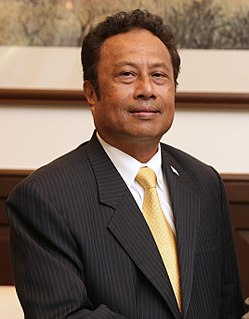 Thomas Esang "Tommy" Remengesau Jr. is a Palauan politician who has been the ninth President of Palau since 2013. He originally served as the seventh president from 2001 to 2009. He also served as a Senator in the Palau National Congress between his two administrations. He was elected as Vice-President of Palau in 1992 and 1996, then as President in 2000, 2004, 2012, and 2016. 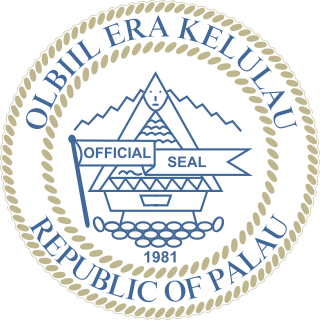 General elections were held in Palau on 4 November 2008.

The Palauan presidential election was held as part of the Palauan general elections on November 4, 2008. It was won by Johnson Toribiong. Incumbent President Tommy Remengesau was ineligible to run because he had served the maximum two consecutive terms allowed.

Kerai Mariur was the Vice President of Palau.

There is a small Japanese community in Palau, which mainly consists of Japanese expatriates residing in Palau over a long-term basis. A few Japanese expatriates started to reside in Palau after it gained independence in 1994, and established long-term businesses in the country. Japanese settlement in Palau dates back to the early 19th century, although large scale Japanese migration to Palau did not occur until the 1920s, when Palau came under Japanese rule and administered as part of the South Pacific Mandate. Japanese settlers took on leading administrative roles in the Japanese colonial government, and developed Palau's economy. After the Japanese surrender in 1945, virtually all of the Japanese population was repatriated back to Japan, although people of mixed Japanese-Palauan descent were allowed to remain behind. People of Japanese-Palauan descent constitute a large minority of Palau's population as a result of substantial intermarriage between the Japanese settlers and Palauans. They generally identify with, conforming to cultural norms and daily lives with the Palauans.

The Palauan Passport is an international travel document that is issued to Palauan citizens which is issued centrally at the Passport Office in Meyuns, Palau.

The 2012 presidential election in Palau was held on November 6, 2012, in conjunction with the Palauan general election. Former President (2001-2009) Tommy Remengesau Jr. defeated his successor, Incumbent President of Palau Johnson Toribiong, who was first elected in 2008. President Toribiong conceded the election on social media.

Remengesau is a surname. Notable people with the surname include:

Ernestine Kawai Rengiil is a lawyer from Palau. She is the first woman lawyer in Palau and the first Palauan woman to serve as Attorney General. Rengiil has also represented her country in tennis.