Shaman King is a Japanese manga series written and illustrated by Hiroyuki Takei. It follows the adventures of Yoh Asakura as he attempts to hone his shaman skills to become the Shaman King by winning the Shaman Fight. Takei chose shamanism as the main theme of the series because he wanted a topic that had never been attempted before in manga. The Shaman King manga was originally serialized in Weekly Shōnen Jump between June 1998 and August 2004. The individual chapters were collected and released in 32 tankōbon volumes by Shueisha.

Maria-sama ga Miteru, often shortened to Marimite (マリみて), is a Japanese light novel series written by Oyuki Konno with illustrations by Reine Hibiki. Originally written as a short story in 1997, Shueisha published 39 light novel volumes from April 1998 to April 2012. The story focuses on a group of teenage girls attending the Catholic Lillian Girls' Academy in Tokyo, Japan. Its storyline largely revolves around the lives and close relationships of the school's student council known as the Yamayuri Council.

3×3 Eyes, pronounced Sazan Eyes, in Japanese, is a manga written and illustrated by Yuzo Takada. The manga was serialized in Weekly Young Magazine from 1987 to 2002, spanning to a total of 40 volumes. In 1993, it won the Kodansha Manga Award for shōnen. The English language translation was published by Dark Horse Comics, but was discontinued after the release of volume 9 in 2005. 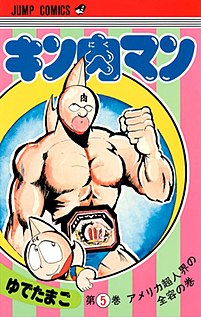 Fist of the Blue Sky is a Japanese manga series written and illustrated by Tetsuo Hara, with plot supervision by Buronson. It was serialized in Weekly Comic Bunch from 2001 to 2010, with the chapters collected into 22 tankōbon volumes by Shinchosha. It is a prequel to the popular 1980s manga Fist of the North Star, which Hara originally illustrated with Buronson writing. Set primarily in Shanghai during the 1930s, the series centers on the 62nd successor of the Hokuto Shinken martial arts style, Kenshiro Kasumi, the namesake and predecessor of Kenshiro from Fist of the North Star. The manga was adapted into a 26-episode anime series that aired on TV Asahi from 2006 to 2007.

Setona Mizushiro is a Japanese comic artist. In 1985 she participated in the publication of a dōjinshi. She remained active in that world until her debut in 1993 with the short story Fuyu ga Owarou Toshiteita that ran in Shogakukan's magazine, Puchi Comic.

Yusuke Murata is a Japanese manga artist, best known for illustrating the American football manga Eyeshield 21, in collaboration with writer Riichiro Inagaki. Eyeshield 21 was serialized between July 2002 and June 2009 in Weekly Shōnen Jump, and was later adapted into an anime television series. Murata's other major work is his illustration of One's One-Punch Man, serialized in the Weekly Young Jump online version.

Toriko is a Japanese manga series written and illustrated by Mitsutoshi Shimabukuro. It follows the adventures of Toriko, a Gourmet Hunter, as he searches for rare, diverse foods to complete a full-course meal. On his journey, he is accompanied by a timid chef who wants to improve his skills. Toriko was serialized in Weekly Shōnen Jump from May 2008 to November 2016, with the chapters collected into 43 tankōbon volumes by Shueisha. 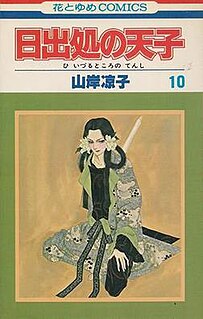 Hi Izuru Tokoro no Tenshi is a Japanese manga written and illustrated by Ryoko Yamagishi. It tells a fictionalised account of Prince Shōtoku, a political figure of sixth-century Japan who spread Buddhism, and his unrequited love for Soga no Emishi, which is very unlike the traditionally known stories of these people. It was serialized in Hakusensha's LaLa from 1980 to 1984. The individual chapters were published in 11 tankōbon under the Hana to Yume Comics imprint, which were released between 1981 and 1984. Hi Izuru Tokoro no Tenshi received the 1983 Kodansha Manga Award for the shōjo category.

Nozomu Tamaki is a Japanese manga artist. His most notable work, Dance in the Vampire Bund, was licensed in English by Seven Seas Entertainment and adapted into a 12 episodes anime series by the studio Shaft.

Cocohana (ココハナ) is a Japanese josei manga magazine published by Shueisha since May 28, 1994.

Aya Nakahara is a Japanese manga artist. She won the 49th Shogakukan Manga Award for shōjo manga for Lovely Complexa.k.a.Love Com, a romance manga about a tall high school girl who falls in love with a short guy. 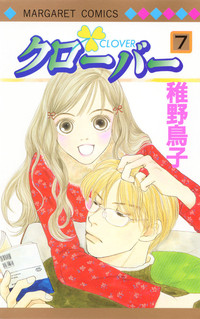 Clover is a manga series written and illustrated by Toriko Chiya. It follows Saya Suzuki, an office lady, who falls in love with her supervisor Susumu Tsuge.

Tokyo Alice is a Japanese slice of life romance josei manga series written and illustrated by Toriko Chiya. It was serialized in Kodansha's Kiss manga magazine and 15 volumes have been published.

Clover (クローバー) is a 2014 Japanese romantic drama film directed by Takeshi Furusawa and based on the manga series created by Toriko Chiya. 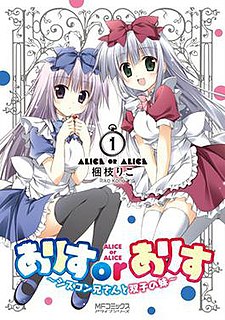