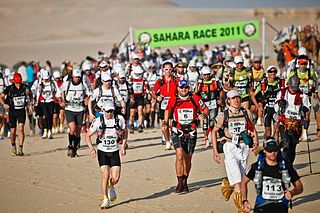 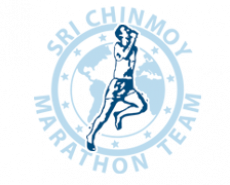 Ashprihanal Pekka Aalto is a Finnish ultramarathon runner who began running as a hobby at age 25. He currently works as a courier. Aalto is a member of The Sri Chinmoy Marathon Team. In 2006, Tarja Halonen, the President of Finland, recognized him as an "International Ambassador of Sport". 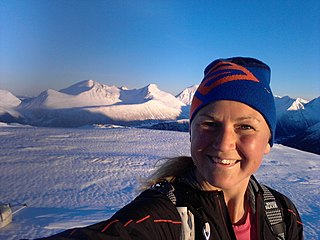 Ida Nilsson is a Swedish long-distance runner who also competes in ski mountaineering. In 2003 - 2006 she won a total of ten gold medals in Swedish championships in track & field and cross country running, plus two NCAA gold medals. After many years away from training Nilsson won the Swedish championship in ski mountaineering in 2016 and a couple of months later won the prestigious Transvulcania ultramarathon.

A 24-hour run is a form of ultramarathon, in which a competitor runs as far as they can in 24 hours. They are typically held on 1- to 2-mile loops or occasionally 400-meter tracks.

Vajin Armstrong is an ultra-distance runner from Christchurch, New Zealand. Armstrong is a disciple of Sri Chinmoy. He and his wife Prasasta manage a musical instrument shop. 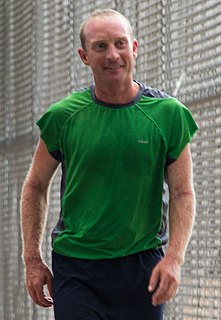 Grahak Cunningham is a ultra-distance runner and motivational speaker from Perth, Western Australia.

Rory Bosio is an American athlete born in 1984. She is specialized in ultra-trail runs and won 2013 and 2014 edition of Ultra-Trail du Mont-Blanc and Lavaredo Ultra-Trail in 2014.

The 12+24 Hour Race Basel is an Ultramarathon race in Basel, Switzerland. The run takes place annually in May, organised by the Sri Chinmoy Marathon Team. It is held on the Sports Facilities St. Jakob on a 1,1 kilometer route.

Dan Lawson is a British ultra runner and charity worker from Brighton. Lawson also does charity work in India for OSCAR India and Skillshare International. He holds the course record for the Grand Union Canal Race and in 2016, he won the European 24 Hour Championships.

Elisabet Barnes is a Swedish athlete specialized in ultrarunning. Her major claim to fame is winning the Marathon des Sables in 2015, winning each stage of the race. She repeated her win in 2017. The Marathon des Sables has been listed by Outside Magazine as one of the 9 toughest ultramarathons in the world. In 2015, she participated in six races, winning all and setting new course records in four.

Lill Maria Kotka, is a Swedish athlete specialized in ultrarunning. Her major claim to fame is winning the 101 km Ultra-Trail Courmayeur-Champex-Chamonix (CCC) in Chamonix, France, in 2016 by a margin of almost half an hour, and the 121 km Ultra-Trail Sur les Traces des Ducs de Savoie (TDS) in the same location, in 2017 by almost two hours and a half, improving the previous course record from 2015 by 46 minutes. Kotka is a member of the Swedish National Team in ultratrail. She participated in the 2015 IAU Trail World Championships, placing 8th. For a living she works as a nutritionist. In 2018 Kotka together with fellow athletes Ida Nilsson and Emelie Forsberg started Moonvalley, an on-line shop dedicated to organic energy bars and sportsdrinks.

Kieren D’Souza is an Indian ultramarathon runner and endurance athlete. In 2016, he became the first and, as of October 2016, the only Indian to qualify for and finish the Spartathlon, a 246 kilometre footrace from Athens to Sparta held annually in Greece. Kieren, then aged 23, completed the race in 33 hours, 2 minutes and 25 seconds, standing 85th among 370 participants. Till 2016, only 29 athletes under the age of 25 had completed the race that has been held annually since 1983.

Kaneenika Janakova is an ultra-distance runner and comes from Cerová near Senica, Slovakia. She has lived in New York for ten years. Janakova is a disciple of Sri Chinmoy. Because of him, she adopted the name Kaneenika which is a Sanskrit word meaning "vision beauty of the inner eye".

Carol Morgan is an Irish ultrarunner, who specialises in non-stop mountain ultramarathons 100 km and longer, often in challenging conditions with significant ascents / descents. Born in Dublin in 1973, where she trained as a nurse, she is an advanced practitioner in emergency medicine. Morgan holds the course record for endurance ultra event, the Kerry Way Ultra.

Rachid El Morabity is a Moroccan athlete born 3 March 1982 in Zagora. He is a specialist of ultra-trail, and has won 7 times the Marathon des Sables. He was also ranked 2nd overall in the OCC in August 2016 and came 2nd in the UT4M 90 in August 2015.