Torleif Soviren Knaphus [1] (14 December 1881 – 14 June 1965) was a Norwegian-born artist and sculptor in Utah, primarily known for sculptures for and about The Church of Jesus Christ of Latter-day Saints (LDS Church).

At age 14 Knaphus took out an apprenticeship in a paint and decorating shop in Haugesund. At 17 he went to sea for a year, then completed his apprenticeship in "decoration painting," earning his master's slip, which entitled him to be bonded and open his own shop.

Knaphus was accepted for study under Harriet Backer at her famous art school (in Oslo) and also attended the Royal Art School where he learned sculpturing from Lars Utne.

While in Oslo, Knaphus converted to the LDS Church in 1902, and after completing his studies, migrated to Salt Lake City in 1906.

After his immigration, Knaphus married Helena "Millie" Christensen in the Salt Lake Temple in 1909. Together they moved to Sanpete County, where Knaphus and his brother painted houses to support the family.

When his brother was called to serve as a LDS missionary, Knaphus decided to get more art training in 1913, where he studied sculpting in Paris at the Académie Julian for a year. After completing his studies in Paris, Kanphus spent six months in New York and then in Chicago studying at the Art Students' League to obtain additional skills in sculpting monuments.

When Knaphus learned that the LDS Church had acquired the Hill Cumorah property, he decided that there need to be a memorial there. After working worked through seven designs, he presented them to leaders of the LDS Church as part of an unsolicited offer to create a monument there. Knaphus later claimed that the Quorum of the Twelve Apostles independently selected the same design that he had been informed through personal revelation was the correct one.

A plaque at the site describes some of the symbolism of the monument, while Knaphus's own "Description of the Hill Cumorah Monument" details more meaning behind the design. The wording on the north sided of the monument titled "Exhortation of Moroni" is the text of Moroni 10:4, which Knaphus carefully shaped by hand, just as he had the other sculpted panels. His young daughter questioned the artist for just having words on this last panel, suggesting that he do another "pretty" panel instead. His reply was: "Dear, this is the prettiest panel of all, and I hope that one day you'll come to understand, like I have, the true meaning of these special words."

The model for the body of the Angel Moroni was not used for the face; instead the model's father was selected out of a crowd, without Knaphus knowing of the relationship between the two men until they posed together for the first time.

He made two visits to the site: first was in the summer of 1934 with Sylvester Q. Cannon, LDS Church presiding bishop, to decide the exact placement and orientation of the monument. The second was when the monument was erected dedicated on 21 July 1935 by Heber J. Grant. In remarks during the ceremony David O. McKay stated "There is no monument in the world today with which greater things are associated." 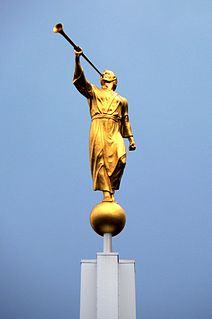 The Angel Moroni is an angel whom Joseph Smith reported as having visited him on numerous occasions, beginning on September 21, 1823. According to Smith, the angel was the guardian of the golden plates, buried in the hill Cumorah near Smith's home in western New York; Latter Day Saints believe the plates were the source material for the Book of Mormon. An important figure in the theology of the Latter Day Saint movement, Moroni is featured prominently in Mormon architecture and art. Besides Smith, the Three Witnesses and several other witnesses also reported that they saw Moroni in visions in 1829.

The Salt Lake Temple is a temple of The Church of Jesus Christ of Latter-day Saints on Temple Square in Salt Lake City, Utah, United States. At 253,015 square feet (23,505.9 m2), it is the largest LDS temple by floor area. Dedicated in 1893, it is the sixth temple completed by the church, requiring 40 years to complete, and the fourth temple built since the Mormon exodus from Nauvoo, Illinois, in 1846. On April 19, 2019 the LDS Church announced that the temple would close on December 29, 2019 for seismic renovations that are anticipated to take approximately four years.

The Seagull Monument is a small monument situated immediately in front of the Salt Lake Assembly Hall on Temple Square, in Salt Lake City, Utah. The Monument commemorates what some members of The Church of Jesus Christ of Latter-day Saints call the miracle of the gulls.

Mahonri Mackintosh Young was an American social-realist sculptor and artist. During his lengthy career, he created more than 320 sculptures, 590 oil paintings, 5,500 watercolors, 2,600 prints, and thousands of drawings. However, he is primarily recognized for his sculpture. His work includes landscapes, portraits, busts, life-size sculptures, monuments, and engravings. Regardless of his medium of choice, his work is characterized by spontaneity; he often preferred to prepare his work with quick sketches on the scene. He felt this made his work more natural as compared to using a model in the studio. He was fairly commercially successful during his life, though he did not find success until his mid-30s. Large commissions for sculptures from The Church of Jesus Christ of Latter-day Saints were particularly lucrative for him.

The Mesa Arizona Temple is the seventh operating temple of The Church of Jesus Christ of Latter-day Saints. Located in the city of Mesa, Arizona, it is the first of six LDS temples built or planned in the state.

Cyrus Edwin Dallin was an American sculptor best known for his depictions of Native Americans. He created more than 260 works, including the equestrian statue of Paul Revere in Boston, Massachusetts; the Angel Moroni atop Salt Lake Temple in Salt Lake City, Utah; and his most famous work, Appeal to the Great Spirit, at the Museum of Fine Arts, Boston. He was also an Olympic archer. 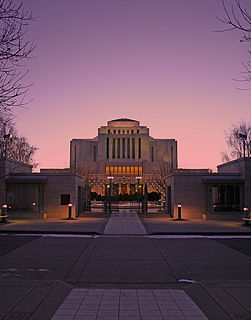 The Cardston Alberta Temple is the eighth constructed and sixth of the still-operating temples of The Church of Jesus Christ of Latter-day Saints. Located in Cardston, Alberta, it is the oldest LDS Church temple outside the United States. It is one of eight temples that do not have an angel Moroni statue, and one of six without spires, similar to Solomon's Temple. It is also one of only two LDS Church temples built in the shape of a cross, the other being the Laie Hawaii Temple.

The Ogden Utah Temple is the sixteenth constructed and fourteenth operating temple of The Church of Jesus Christ of Latter-day Saints. Located in Ogden, Utah, it was originally built with a modern, single-spire design very similar to the Provo Utah Temple. During a renovation completed in 2014, the exterior and interior were extensively changed.

Symbolism in The Church of Jesus Christ of Latter-day Saints is the process whereby objects or actions have been invested with an inner meaning expressing church ideas. The LDS Church and its membership have adopted a number of symbols that differ from those typically used in Christianity.

On December 27, 1832, two years after the organization of the Church of Christ, the movement's founder, Joseph Smith, stated he received a revelation that called upon church members to restore the practice of temple worship. The Latter Day Saints in Kirtland, Ohio were commanded to:

Avard Tennyson Fairbanks was a 20th-century American sculptor. Over his eighty-year career, he sculpted over 100 public monuments and hundreds of artworks. Fairbanks is known for his religious-themed commissions for The Church of Jesus Christ of Latter-day Saints including the Three Witnesses, Tragedy of Winter Quarters, and several Angel Moroni sculptures on LDS temple spires. Additionally, Fairbanks sculpted over a dozen Abraham Lincoln-themed sculptures and busts among which the most well-known reside in the U.S. Supreme Court Building and Ford's Theatre Museum. 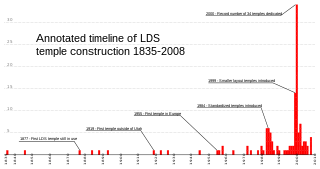 In The Church of Jesus Christ of Latter-day Saints, a temple is a building dedicated to be a House of the Lord. Temples are considered by church members to be the most sacred structures on earth.

The Brigham Young Monument is a bronzed historical monument located on the north sidewalk of the intersection at Main and South Temple Streets of Salt Lake City, Utah. It was erected in honour of pioneer-colonizer, Utah governor, and LDS Church president Brigham Young who led the Mormon pioneers into the Utah Territory in 1847. The base of the twenty-five-foot monument has the bronze figure of an Indian facing east and that of a bearded fur trapper facing west, both of which preceded the Mormon settlers. On the south side is a bronze bas-relief of a pioneer man, woman, and child, while another bronze plaque has a list of the pioneers who arrived in the Salt Lake Valley on July 24, 1847, and their equipment.

Millard F. Malin (1891–1974) was an American sculptor most noted for his statues of the Angel Moroni such as the one on the Los Angeles Temple. 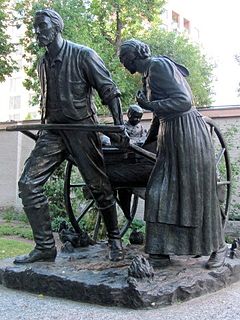 John Rowe Moyle was a Mormon pioneer and a settler of Alpine, Utah. He was a master stonemason for the Salt Lake Temple, and was the carver of the inscription "Holiness to the Lord" on the temple's east side.

Monument to Women Memorial Garden is a statuary monument in Nauvoo, Illinois, owned by The Church of Jesus Christ of Latter-day Saints. The monument is a two-acre garden with twelve statues depicting traditional women's roles. It was constructed in the 1970s to serve as a replacement for the Relief Society monument and designed to promote the woman's values which the LDS Church believed were threatened by the Equal Rights Amendment (ERA). Dennis Smith and Florence Hansen sculpted the bronze statues and church president Spencer W. Kimball dedicated the monument on June 30, 1978. 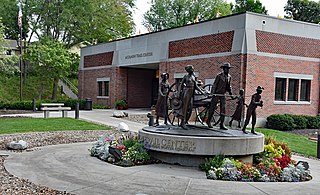 The Mormon Trail Center at Historic Winter Quarters is a museum and visitors' center of The Church of Jesus Christ of Latter-day Saints located in the Florence neighborhood of Omaha, Nebraska, United States. The museum interprets the story of the Mormon Trail along with the history of a temporary Mormon settlement known as Winter Quarters, which was located in the Florence area between 1846–1848.