Toru Kumon (公文 公, Kumon Tōru, March 26, 1914 – July 25, 1995) was a Japanese mathematics educator, born in Kōchi Prefecture, Japan. [1] He graduated from the College of Science at Osaka University with a degree in mathematics and taught high school mathematics in his home town of Osaka. [1] In 1954, his son, Takeshi, performed poorly in a Year 2 mathematics test. Prompted by his wife, Teiko, Toru closely examined Takeshi's textbooks and believed they lacked the proper opportunity for a child to practice and master a topic. As a result, he began to handwrite worksheets each day for his son. By the time Takeshi was in Year 6, he was able to solve differential and integral calculus usually seen in the final years of high school. This was the beginning of the Kumon Method of Learning.

As a result of Takeshi's progress, other parents became interested in Kumon's ideas, and in 1956, the first Kumon Center was opened in Osaka, Japan.[ citation needed ] In 1958, Toru Kumon founded the Kumon Institute of Education, which set the standards for the Kumon Centers that began to open around the world. [1]

The Kumon Programs are designed to strengthen a student's fundamental maths and language skills by studying worksheets tailored to a student's ability. The method also aims for students to learn independently and to study advanced material beyond their school grade level.

Students progress once they demonstrate mastery of a topic. Kumon defined mastery as being able to achieve an excellent score on the material in a given time. Kumon strongly emphasised the concepts of time and accuracy.[ citation needed ]

Even in his later years, Toru Kumon gave lectures on his method of learning including the importance of having students learn material that is suited to their ability and not their age and the benefits of allowing students to learn material well ahead of their grade level.

Toru Kumon died in Osaka on July 25, 1995 at the age of 81 from pneumonia. [2] There is a Toru Kumon museum in Osaka, Japan and a Kumon Foundation Day celebrated on October 20 each year. Asteroid 3569 Kumon is named after him. [3]

Rote learning is a memorization technique based on repetition. The idea is that one will be able to quickly recall the meaning of the material the more one repeats it. Some of the alternatives to rote learning include meaningful learning, associative learning, and active learning.

New Mathematics or New Math was a brief, dramatic change in the way that mathematics was taught in American grade schools, and to a lesser extent in European countries during the 1960s. The change involved new curriculum topics and teaching practices introduced in the U.S. shortly after the Sputnik crisis, in order to boost science education and mathematical skill in the population so that the technological threat could be met of Soviet engineers, reputedly highly skilled mathematicians. The phrase is often used now to describe any short-lived fad that quickly becomes highly discredited.

Seventh grade, equivalent to Year 8 in England and Wales, and S1 in Scotland, is a year or level of education in many nations around the world. The seventh grade is the eighth school year and comes after 6th grade or elementary school. Students are around 12-13 years old in this stage.

Principles and Standards for School Mathematics (PSSM) are guidelines produced by the National Council of Teachers of Mathematics (NCTM) in 2000, setting forth recommendations for mathematics educators. They form a national vision for preschool through twelfth grade mathematics education in the US and Canada. It is the primary model for standards-based mathematics.

Founded in 1920, The National Council of Teachers of Mathematics (NCTM) is the world's largest mathematics education organization.

Physics education refers to the methods currently used to teach physics. Physics Education Research refers to an area of pedagogical research that seeks to improve those methods. Historically, physics has been taught at the high school and college level primarily by the lecture method together with laboratory exercises aimed at verifying concepts taught in the lectures. These concepts are better understood when lectures are accompanied with demonstration, hand-on experiments, and questions that require students to ponder what will happen in an experiment and why. Students who participate in active learning for example with hands-on experiments learn through self-discovery. By trial and error they learn to change their preconceptions about phenomena in physics and discover the underlying concepts.

Mastery learning is an instructional strategy and educational philosophy, first formally proposed by Benjamin Bloom in 1968. Mastery learning maintains that students must achieve a level of mastery in prerequisite knowledge before moving forward to learn subsequent information. If a student does not achieve mastery on the test, they are given additional support in learning and reviewing the information and then tested again. This cycle continues until the learner accomplishes mastery, and they may then move on to the next stage.

A worksheet, in the word's original meaning, is a sheet of paper on which one performs work. They come in many forms, most commonly associated with children's school work assignments, tax forms, and accounting or other business environments. Software is increasingly taking over the paper-based worksheet.

Formative assessment, formative evaluation, formative feedback, or assessment for learning, including diagnostic testing, is a range of formal and informal assessment procedures conducted by teachers during the learning process in order to modify teaching and learning activities to improve student attainment. It typically involves qualitative feedback for both student and teacher that focuses on the details of content and performance. It is commonly contrasted with summative assessment, which seeks to monitor educational outcomes, often for purposes of external accountability.

Traditional mathematics was the predominant method of mathematics education in the United States in the early-to-mid 20th century. This contrasts with non-traditional approaches to math education. Traditional mathematics education has been challenged by several reform movements over the last several decades, notably new math, a now largely abandoned and discredited set of alternative methods, and most recently reform or standards-based mathematics based on NCTM standards, which is federally supported and has been widely adopted, but subject to ongoing criticism.

Investigations in Numbers, Data, and Space is a K–5 mathematics curriculum, developed at TERC in Cambridge, Massachusetts, United States. The curriculum is often referred to as Investigations or simply TERC. Patterned after the NCTM standards for mathematics, it is among the most widely used of the new reform mathematics curricula. As opposed to referring to textbooks and having teachers impose methods for solving arithmetic problems, the TERC program uses a constructivist approach that encourages students to develop their own understanding of mathematics. The curriculum underwent a major revision in 2005–2007.

Math wars is the debate over modern mathematics education, textbooks and curricula in the United States that was triggered by the publication in 1989 of the Curriculum and Evaluation Standards for School Mathematics by the National Council of Teachers of Mathematics (NCTM) and subsequent development and widespread adoption of a new generation of mathematics curricula inspired by these standards.

Kumon is an educational network created by Toru Kumon which uses his Kumon Method to teach mathematics and reading for young students.

Singapore math is a teaching method based on the national mathematics curriculum used for kindergarten through sixth grade in Singapore. The term was coined in the United States to describe an approach originally developed in Singapore to teach students to learn and master fewer mathematical concepts at greater detail as well as having them learn these concepts using a three-step learning process: concrete, pictorial, and abstract. In the concrete step, students engage in hands-on learning experiences using concrete objects such as chips, dice, or paper clips. This is followed by drawing pictorial representations of mathematical concepts. Students then solve mathematical problems in an abstract way by using numbers and symbols.

Reform mathematics is an approach to mathematics education, particularly in North America. It is based on principles explained in 1989 by the National Council of Teachers of Mathematics (NCTM). The NCTM document, Curriculum and Evaluation Standards for School Mathematics, attempted to set forth a vision for K-12 mathematics education in the United States and Canada. Their recommendations were adopted by many education agencies, from local to federal levels through the 1990s. In 2000, NCTM revised its standards with the publication of Principles and Standards for School Mathematics (PSSM). Like the first publication, these updated standards have continued to serve as the basis for many states' mathematics standards, and for many federally funded textbook projects. The first standards gave a strong call for a de-emphasis on manual arithmetic in favor of students' discovering their own knowledge and conceptual thinking. The PSSM has taken a more balanced view, but still emphasizes conceptual thinking and problem solving.

Mathnasium is an education brand and supplemental math learning franchise consisting of over 1,000 learning centers in North America, South America, Europe, the Middle East, and Asia that provides instruction to students in pre-kindergarten through high school. The curriculum employs the Mathnasium Method™, a proprietary system that was developed by a team of education experts with co-founder Lawrence Martinek. 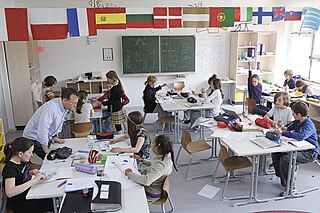 Activity-based learning or ABL describes a range of pedagogical approaches to teaching. Its core premises include the requirement that learning should be based on doing some hands-on experiments and activities. The idea of activity-based learning is rooted in the common notion that children are active learners rather than passive recipients of the information. If the child is provided the opportunity to explore by their own and provided an optimum learning environment then the learning becomes joyful and long-lasting.