Torvill and Dean's Dancing on Ice

Torvill and Dean's Dancing on Ice was an Australian reality television series which was based on the original British version, Dancing on Ice . The series premiered on the Nine Network on Tuesday, 11 July 2006 at 7:30 pm, and involved celebrities ice dancing on a specially constructed ice rink located in Sydney's north-west suburbs. The series ran for one season before being cancelled, and the winner of the competition was model Jake Wall. The series reportedly cost several million dollars to produce and received above-average ratings. [1] [2]

The couples competed against each other for a prize at the end of the series. The ten celebrities were teamed up with ten professional ice skaters and received special training from champion ice dancing duo Jayne Torvill and Christopher Dean themselves. Home viewers voted for their favourite couples and the couple with the fewest votes were voted off the show each week until a winner was decided. The show was run in a similar format to the Seven Network's rival dancing show Dancing with the Stars which had been a major hit for the Seven Network over the previous three years.

During training almost every contestant suffered an injury of some sort, the most serious of which being Michael Slater severing a tendon in his hand after it was accidentally skated over by his partner. Giaan Rooney dislocated her ankle just before the second episode of the series, and was forced to withdraw from the competition. Annalise Braakensiek twisted her ankle during the broadcast of the first episode, and was forced to withdraw as well. [3]

The show was hosted by celebrity gardener and backyard designer Jamie Durie and former Today weather presenter Sami Lukis. It was based on the British ITV show Dancing on Ice , which also featured Torvill and Dean, and is also roughly similar to an earlier Nine program Skating on Thin Ice , also hosted by Durie, in 2005. Kristina, Pam and Matt were also skating partners for the celebrities in the original UK version.

Celebrities and their partners

This table only counts for dances scored on a traditional 30-point scale.

The ratings for the show during the eight-week season were high in its timeslot with the series premiere being 1.61 million viewers, over the course of the rest of the season viewership was between 1.2 to 1.1 million viewers, with 1.42 million watching the grand final. Despite strong viewership figures, the show was axed due to high production costs and mostly negative reviews from critics.

Plans of a reunion special

During the series, the Nine Network planned a live reunion special, also hosted by Durie and Lukis. It would feature all ten celebrities talking about their experiences during the series, and answering questions from a live studio audience. The main highlight would be Torvill and Dean themselves making a very special guest appearance in the studio towards the end, when they would congratulate the contestants, hosts and judges, and of course, the home viewers for their votes. Following the cancellation of the show, the reunion special was also cancelled. 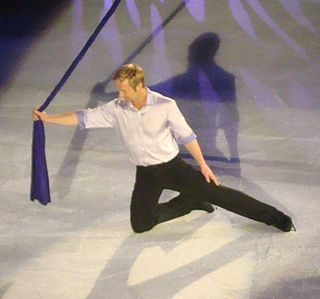 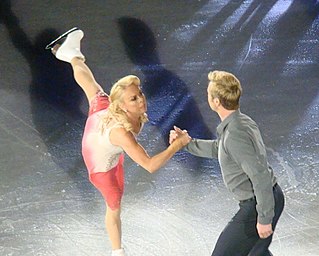 Torvill and Dean are English ice dancers and former British, European, Olympic and World champions. At the Sarajevo 1984 Winter Olympics the pair won gold and became the highest scoring figure skaters of all time receiving twelve perfect 6.0s and six 5.9s which included artistic impression scores of 6.0 from every judge, after skating to Maurice Ravel's Boléro. One of the most-watched television events ever in the United Kingdom, their 1984 Olympics performance was watched by a British television audience of more than 24 million people.

Skating on Thin Ice was a short-lived Australian celebrity reality television programme broadcast on the Nine Network in 2005. Hosted by Jamie Durie, nine celebrities learnt to skate with the ultimate goal being to perform with Disney on Ice, with proceeds going toward children's charity, CanTeen.

The second series of Dancing on Ice aired from 20 January to 17 March 2007 on ITV. It was presented by Phillip Schofield and Holly Willoughby, and judged by the "Ice Panel", consisting of Nicky Slater, Natalia Bestemianova, Jason Gardiner, Karen Barber and Robin Cousins. Jayne Torvill and Christopher Dean coached and trained the contestants. In this series, eleven celebrities competed, compared to ten in the first series. The series was won by former rugby star Kyran Bracken, with Melanie Lambert as the professional winner.

Jason Gardiner is an Australian choreographer, singer, and theatre producer best known for his role as a caustic and controversial judge on the ITV shows Dancing on Ice, Born to Shine and Stepping Out.

The first series of Dancing on Ice aired from 14 January to 4 March 2006 on ITV. It was presented by Phillip Schofield and Holly Willoughby, and judged by the "Ice Panel", consisting of Nicky Slater, Karen Kresge, Jason Gardiner, Karen Barber and Robin Cousins. Jayne Torvill and Christopher Dean coached and trained the contestants.

The fourth series of Dancing on Ice aired from 11 January to 22 March 2009 on ITV. Phillip Schofield and Holly Willoughby returned as main presenters, while Karen Barber, Nicky Slater, Jason Gardiner, Ruthie Henshall and Robin Cousins returned to the "Ice Panel".

The third series of Dancing on Ice aired from 13 January to 16 March 2008 on ITV. The show moved from Saturday nights to Sunday nights, with Phillip Schofield and Holly Willoughby returning to present. Karen Barber, Nicky Slater, Jason Gardiner and Robin Cousins returned to the "Ice Panel", with Ruthie Henshall joining the panel as a replacement for Natalia Bestemianova. The commissioning of the series was first confirmed by Schofield at the 2007 BAFTA Awards.

The sixth series of Dancing on Ice aired from 9 January to 27 March 2011 on ITV. Phillip Schofield and Holly Willoughby returned as hosts whilst Jayne Torvill and Christopher Dean returned to mentor the celebrities. As part of a major revamp, the show moved from Elstree Studios to Shepperton Studios, and unveiled a new set. It was the also the first series to be broadcast in HD.

The seventh series of Dancing on Ice aired from on 8 January to 25 March 2012 on ITV. Phillip Schofield returned as presenter, but Holly Willoughby was replaced by Christine Bleakley. Jayne Torvill and Christopher Dean returned to mentor the celebrities, with Karen Barber returning as head coach. This series was judged by The Ice Panel by Louie Spence, Robin Cousins and Katarina Witt. Spence and Witt joined The Ice Panel as replacements for former judges, Jason Gardiner and Emma Bunton. The show moved back to its original location of Elstree Studios, which was used during the show's first five series, but still used the same layout as introduced in last series.

The eighth series of Dancing on Ice aired from on 6 January to 10 March 2013 on ITV. Phillip Schofield and Christine Bleakley returned as hosts, and Jayne Torvill and Christopher Dean serving as mentors to the celebrities. The series was judged by The Ice Panel, consisting of Robin Cousins, Karen Barber, Ashley Roberts and Jason Gardiner. Gardiner returned to replace Louie Spence after departing at the end of series 6 in 2011 and Ashley Roberts joined The Ice Panel as Katarina Witt's replacement, while Barber rejoined The Ice Panel after serving as head coach in series 6 and 7. It was revealed that at the end of the show of 13 January that the duel would return, this saw two couples go head-to-head on the ice at the same time performing different routines to the same song, the judges then decided which one will be immune from the public vote.

Strictly Come Dancing returned for its eleventh series beginning with a launch show on 7 September 2013, with the live shows starting on 27 and 28 September 2013. Sir Bruce Forsyth and Tess Daly returned to co-present the main show on BBC One, with Claudia Winkleman returning to present the results show alongside Daly. Zoe Ball returned as presenter of Strictly Come Dancing: It Takes Two on BBC Two. Len Goodman, Bruno Tonioli, Craig Revel Horwood and Darcey Bussell also returned as judges.

The ninth series of Dancing on Ice aired from 5 January to 9 March 2014 on ITV. It was announced on 22 October 2013 that this series would be the show's last, and would be an 'All-Stars' series featuring former winners and previous contestants. Phillip Schofield and Christine Bleakley returned to present, with Jayne Torvill and Christopher Dean returning as mentors. Robin Cousins, Jason Gardiner, Karen Barber and Ashley Roberts returned for their ninth, eighth, seventh and second series on The Ice Panel. Cousins was unable to appear on the ice panel during weeks 6 and 7 due to him commentating the 2014 Winter Olympics in Sochi, Russia and was replaced by original judge Nicky Slater, while Barber acted as head judge.

Strictly Come Dancing returned for its twelfth series beginning from 7 September 2014 with a launch show, with the live shows starting on 26 and 27 September. Tess Daly returned to present the main show on BBC One alongside Claudia Winkleman, who was promoted to co-presenter in addition to the results show after Sir Bruce Forsyth decided to leave the show after the eleventh series; however, Forsyth continued to host the Christmas and Children in Need specials. Zoe Ball returned as presenter of spin-off show Strictly Come Dancing: It Takes Two on BBC Two. Judges Len Goodman, Bruno Tonioli, Craig Revel Horwood and Darcey Bussell also returned.

The eleventh series of Dancing on Ice began airing on 6 January 2019 on ITV. Filming took place in the purpose-built studio at Bovingdon Airfield, which was set up for series ten when the show was revived in 2018. An announcement was made on 11 March 2018, during the series ten finale, that the show had been recommissioned for another series.

The twelfth series of Dancing on Ice began airing on ITV on 5 January 2020. During the finale of the eleventh series, it was announced that Dancing on Ice had been renewed for another series. The series is once again being filmed in the purpose-built studio at Bovingdon Airfield, which was set up for the tenth series.