Tosu Futures (鳥栖フューチャーズ, Tosu Futures) was a Japanese football club that played in the former Japan Football League between 1994 and 1996.

PJM Futures was founded in Hamamatsu, Shizuoka in 1987 as the team of PJM Japan, a company based on Paul J. Meyer's U.S. academy Success (the company name came from Meyer's initials). The club moved to Tosu, Saga in 1994, changing its name to Tosu Futures. This happened one year after joining the former Japan Football League's Division 2 (which was merged into a single JFL division in 1994). Saga Stadium was used as a temporary home ground until Tosu Stadium opened in 1996. In January, 1997, Tosu futures caught the withdrawal of PJM Japan and was dissolved. In February, 1997, Sagan Tosu was established.

Tosu may refer to:

Sagan Tosu is a Japanese professional football club, currently playing in the J1 League. The team is located in Tosu, Saga Prefecture. 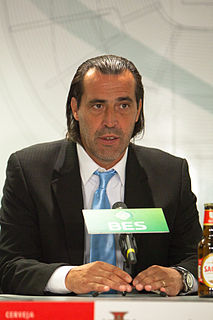 Ekimae Real Estate Stadium is a football stadium in Tosu, Saga, Japan. It serves as a home ground of J1 League club Sagan Tosu. The stadium holds 24,130 people and was built in 1996.

Stephen Tataw Eta was a Cameroonian football right-back who played club football in his home country and Japan. He captained the Cameroon national team at the 1990 and 1994 editions of the FIFA World Cup. He was the first player from Africa to play for a Japanese club.

Koji Maeda is a former Japanese football player and manager.

Saga Stadium (佐賀県総合運動場陸上競技場) is a multi-purpose stadium in Saga, Japan. It is currently used mostly for football matches. The stadium was originally opened in 1970 and has a capacity of 17,000 spectators.

Hitoshi Morishita is a former Japanese football player and manager.

Hiroki Shibuya is a former Japanese football player and manager. He is the current manager of Roasso Kumamoto.