Last updated January 04, 2020
This article is about the place in Barnet, Greater London. For the suburb of High Wycombe, see High Wycombe. For other uses, see Totteridge (disambiguation).

Totteridge is an old English village, currently a residential area in London Borough of Barnet, England. It is a mixture of suburban development and open land (including some farmland) situated 8.20 miles (13.05 km) north north-west of Charing Cross. It is part of the Whetstone postal district (N20).

It gives its name to a ward in the borough and to the St Andrew, Totteridge ecclesiastical parish of the Diocese of St Albans. [2]

This area was called Tataridge in the 13th Century. It may have been named after someone called Tata. [3] The ridge is the high ground between the valleys of the Dollis Brook and Folly Brook. Over the centuries the rural qualities of Totteridge have attracted well-to-do families. Cardinal Manning was born at Copped Hall in Totteridge in 1808. [4] With the opening of the Great Northern Railway station in 1872, late-Victorian and Edwardian mansions were built around the old village. In line with overall trends in the late 1930s, following the conversion of the railway station (in operation from 1872 until 1941) into a London Underground station (from 1940) on the Northern line, smaller properties were built within walking distance of the station (Totteridge and Whetstone tube station). In 1968 much of Totteridge was designated a Conservation Area, and no major developments have taken place since then.

Totteridge was a civil parish of Hertfordshire covering an area of 1,604 acres (6.49 km2) [5] and formed part of a thin protrusion into Middlesex. It became part of Barnet Rural District and had a parish council from 1894 to 1914. It then formed part of Barnet Urban District from 1914 to 1965. In 1965, the parish and urban district were abolished by the London Government Act 1963 and the area was transferred from Hertfordshire to Greater London, to become part of the London Borough of Barnet. In 1901 the parish had a population of 844 and by 1951 it had risen to 4,500. [6]

The boundary to the north and east is the Dollis Brook and the boundary to the south is that river's tributary, the Folly Brook. While these rivers define the area covered by the residents' association, the southern part of the area (with postcode N12 rather than N20) is often regarded as being in Woodside Park.

St. Andrew's Church stands on the ancient circle site, with a chapel known to be located here from 1250. The rounded boundaries of the churchyard imply an underlying mote and ancient meeting place. The ancient yew tree in the churchyard is about 2,000 years old (as estimated by Kew garden's experts) and is the oldest tree in London (also included in the book "100 Greatest Trees of London). The Tithe Barn and the adjacent animal Pound, now both part of the Pound House estate, date from 17th and 16th centuries accordingly. In 1790-1791, during the church renovation, all church services were conducted in the Tithe Barn. The West End House barn and Laurel Farm barn were built in the 17th century and now converted into private houses. Timber framed buildings existing from the Tudor era also include Willow House and Rose Cottage.

Totteridge has many spacious detached properties in a green setting that are highly valued; some of them are among the most expensive houses in London. Its past and present residents have included the rich and famous, including Arsène Wenger, Frankie Vaughan, Des O'Connor, Cliff Richard, Mickie Most, Hank Marvin, David Dein, Mike Ashley and many top footballers. More modest housing, much of it semi-detached, predominates at the eastern end of Totteridge.

Transport for London bus route 251 towards Edgware bus/tube station (westbound), or towards Arnos Grove tube station (eastbound), passes through Totteridge Village along the A5109.

Route 326 towards Barnet (the Spires), or towards Brent Cross Shopping Centre, skirts the eastern fringe of the area, operating a service along the eastern section of Totteridge Lane, and a Hail and Ride service along Longland Drive.

The economic activity of residents aged 16–74 was 38.3% in full-time employment, 9.9% in part-time employment, 14.7% self-employed, 2.3% unemployed, 1.9% students with jobs, 7.6% students without jobs, 11.1% retired, 8.8% looking after home or family, 2% permanently sick or disabled and 3.4% economically inactive for other reasons. The industry of employment of residents was 15.1% retail, 6.9% manufacturing, 3.2% construction, 23.2% real estate, 9.8% health and social work, 8.9% education, 6% transport and communications, 6.9% public administration, 3.5% hotels and restaurants, 8.5% finance, 0.4% agriculture and 7.6% other. Compared with national figures, the ward had a relatively high proportion of workers in finance and real estate. According to Office for National Statistics estimates, during the period of April 2001 to March 2002 the average gross weekly income of households was £880, compared with an average of £660 in South East England. Of the ward's residents aged 16–74, 39.2% had a higher education qualification or the equivalent, compared with 19.9% nationwide. [7] 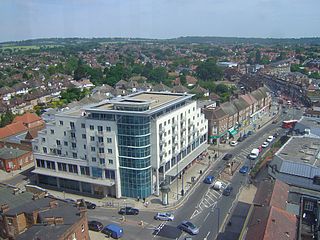 Edgware is a suburban town in north London, mostly in the London borough of Barnet but with a small part falling in Harrow. Edgware is centred 9.5 miles (15.3 km) north-northwest of Charing Cross and has its own commercial centre. Edgware has a generally suburban character, typical of the rural-urban fringe. It was an ancient parish in the county of Middlesex. The community benefits from some elevated woodland on a high ridge marking the Hertfordshire border of gravel and sand. Edgware is identified in the London Plan as one of the capital's 35 major centres. It includes the areas of Burnt Oak, The Hale, Edgwarebury, Canons Park, and parts of Queensbury. 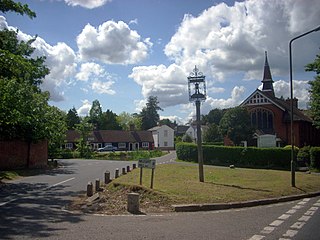 Mill Hill is a suburb in the London Borough of Barnet, England. It is situated around 9 miles (14 km) northwest of Charing Cross. Mill Hill was in the historic county of Middlesex until 1965, when it became part of Greater London. Its population counted 18,451 inhabitants as of 2011. 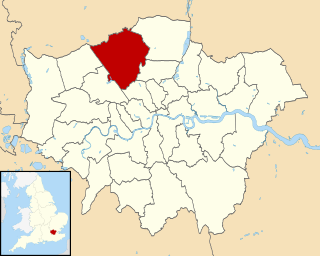 The London Borough of Barnet is a suburban London borough in North London. It forms part of Outer London and is the largest London borough by population with 384,774 inhabitants; it covers an area of 86.74 square kilometres (33 sq mi), the fourth highest, and has a population density of 45.8 people per hectare, which ranks it 25th. The borough was formed in 1965 from parts of the counties of Middlesex and Hertfordshire.

Whetstone is a place in the London Borough of Barnet, bearing the postcode N20. It is to the east of Totteridge, and these areas are known together as Totteridge and Whetstone. This combined area was at the outset of the 21st century found to be the 63rd-richest of the more than 9,000 wards of the United Kingdom, an acclamation which can be credited to Totteridge Lane, a long rural road that is home to many multi-millionaires. 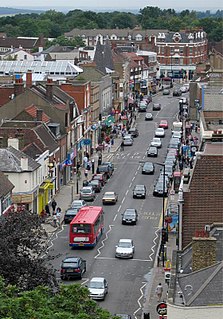 Chipping Barnet or High Barnet is a suburban market town in north London, forming part of the London Borough of Barnet, England. Historically in Hertfordshire, it is a suburban development built around a 12th-century settlement, and is located 10 1⁄2 miles (17 km) north-northwest of Charing Cross, 3 miles (4.8 km) east from Borehamwood, 5.2 miles (8.4 km) west from Enfield and 3.2 miles (5.1 km) south from Potters Bar. Its population, including its localities East Barnet, New Barnet, Hadley Wood, Monken Hadley, Cockfosters and Arkley, was 47,359 as of 2011.

East Barnet is an area of north London within the London Borough of Barnet bordered by New Barnet, Cockfosters and Southgate. It is a largely residential suburb whose central area contains shops, public houses, restaurants and services, and the parish church of St Mary the Virgin. East Barnet is close to the M25 and the A1 and M1. 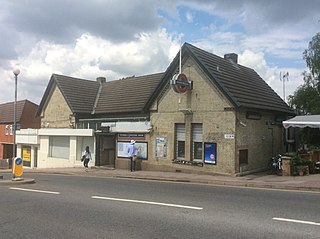 Totteridge & Whetstone is a London Underground station in Whetstone of the London Borough of Barnet, North London. The station is the penultimate one on the High Barnet branch of the Northern line, between Woodside Park and High Barnet stations, in Travelcard Zone 4. It was first built in 1872.

Dollis Brook, runs through the London Borough of Barnet in north London. It is a tributary of the River Brent, which is itself a tributary of the River Thames. The Dollis Valley Greenwalk follows almost all of Dollis Brook, apart from a short section at the beginning which passes through private land, and the London Loop follows it as far as Barnet Lane. The name Dollis is probably derived from the Middle English word 'dole', meaning the shares of land in the common field.

Woodside Park is a suburban residential area in London. It is located in the London Borough of Barnet, in the North Finchley postal district of N12.

Friern Barnet is a suburban area within the London Borough of Barnet, 7.4 miles (11.9 km) north of Charing Cross. Its centre is formed by the busy intersection of Colney Hatch Lane, Woodhouse Road and Friern Barnet Road.

The Edgware, Highgate and London Railway was a railway in north London. The railway was a precursor of parts of London Underground's Northern line and was, in the 1930s the core of an ambitious expansion plan for that line which was thwarted by the Second World War. Parts of the line were closed in the 1950s and have since been removed.

Barnet was a local government district in south Hertfordshire from 1863 to 1965 around the town of Barnet.

Friern Barnet Urban District was a local government area in Middlesex, England created in 1883 from the civil parish Friern Barnet. It was succeeded by the London Borough of Barnet in 1965 as one of the smaller of its contributory predecessor districts. It was at the local level governed for nine years by the local board, then by Friern Barnet Urban District Council which operated primarily with separate functions from the County Council, operating occasionally for major planning decisions and major projects together with that body, Middlesex County Council.

The London Borough of Barnet, located on the northern periphery of London and having much of the area within its boundaries in the Metropolitan Green Belt, has many parks and open spaces. In addition there are large areas taken over by cemeteries and golf courses, and part of Hampstead Heath.

The Dollis Valley Greenwalk is a footpath route in the London Borough of Barnet in London, England, between Moat Mount Nature Reserve in Mill Hill and Hampstead Heath. The route is designed to act as a link between the Capital Ring and the London Loop, and between the many green spaces and wildlife corridors along the way. It is approximately 10 miles (16 km) long. It mainly follows the Dollis Brook, and is one of the many parks and open spaces in Barnet.

Arkley is an area of North London, England, within the London Borough of Barnet. It is located 10.6 miles (17.1 km) north northwest of Charing Cross.

Totteridge Fields is a 97-hectare Site of Metropolitan Importance for Nature Conservation (SINC) in Totteridge in the London Borough of Barnet. The SINC includes the privately owned Highwood Hill, and at the western end is a seven-hectare Local Nature Reserve owned by Barnet Council and managed by the London Wildlife Trust.

Darland's Lake Nature Reserve is a nature reserve south of Totteridge Village in Barnet, England. It is owned by the London Borough of Barnet and was managed from 1971 by the Hertfordshire and Middlesex Wildlife Trust, and more recently by the borough council. In 2007 the council spent £215,000 on repairing the dam and other works, and then proposed leasing the reserve to the Wildlife Trust. The transfer did not take place and in September 2017 a trust was set up by the London Wildlife Trust and local residents associations which took over the management of Darland's Lake. 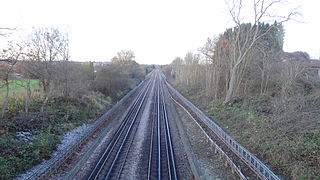 The Northern line Embankment between Totteridge and Whetstone and High Barnet tube stations on the Northern line is a Site of Borough Importance for Nature Conservation, Grade II, in the London Borough of Barnet.