The Tower Site (or 33-Bl-15) is a prehistoric village site dating from 1000 to 1499 AD and is closely associated with the Monongahela culture. [3] Located around 4 miles (6.4 km) north-west of Barnesville, Ohio, United States, the site was placed on the National Register of Historic Places in 1982.

The site was once a prehistoric village for the Monongahela and is just one of several village sites located throughout Ohio. Located on a high hilltop with an elevation of 1,360 feet (410 m), the site is located between the headwaters of two prominent creeks, it provided an excellent site for habitation.

The village encompassed around 2-3 acres of land with huts, refuse pits and burial features ringing a central plaza devoid of any structure. The site has yielded the human remains of 3 separate natives, two female and one male. Early local residents claimed the site as a burial ground due to a large amount of human remains found when a county road was laid out through the middle of the village site. The eastern side of the site has not been investigated as permission has been repeatedly refused by the landowner.

The site was abandoned sometime around 1500 AD for unknown reasons.

The location was fenced off to keep trespassers out and also to mark the village bounds from the local mining operations. The location also houses a radio relay tower, which lends its name to the site. The site was severely "potholed" (cylindrical sections are dug up and sifted, compared to a large square excavation), revealing pottery shards, bone fragments, arrow heads and beads. The many finds brought attention to the site as it was discovered to be a village instead of just a burial ground. Several excavations during the late 1970s by Kent State University's archaeological department further discovered hundreds of animal bone fragments, pottery shards, arrow heads, cannel coal pendants, shells, beads, as well as a burial pit containing a female skeleton.

The coal company completed most operations in the area of the Tower Site, leaving the site comparatively quiet. The fence has recently been removed as the site is under ongoing surveillance to protect it from vandals. 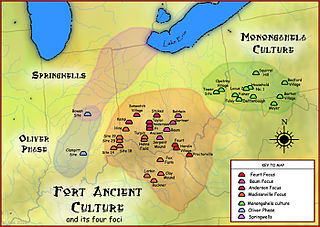 The Monongahela culture were an Iroquoian Native American cultural manifestation of Late Woodland peoples from AD 1050 to 1635 in present-day western Pennsylvania, western Maryland, eastern Ohio, and West Virginia. The culture was named by Mary Butler in 1939 for the Monongahela River, whose valley contains the majority of this culture's sites.

The Grand Village of the Illinois, also called Old Kaskaskia Village, is a site significant for being the best documented historic Native American village in the Illinois River valley. It was a large agricultural and trading village of Native Americans of the Illinois confederacy, located on the north bank of the Illinois River near the present town of Utica, Illinois. French explorers Louis Joliet and Father Jacques Marquette came across it in 1673. The Kaskaskia, a tribe of the Illiniwek people lived in the village. It grew rapidly after a French mission and fur trading post were established there in 1675, to a population of about 6,000 people in about 460 houses. Around 1691 the Kaskaskia and other Illiniwek moved further south, abandoning the site due to pressure from an Iroquois invasion from the northeast.

The State Line Archeological District is a complex of archaeological sites and national historic district located west of Elizabethtown, Ohio, United States. Located on both sides of the Indiana/Ohio border, the historic district is composed of five contributing properties spread out across 8 acres (3.2 ha) of land. It is believed to have been the site of a village of the Fort Ancient culture of prehistoric Native Americans.

The McLemore Site, designated by the Smithsonian trinomial 34WA5, is a prehistoric archaeological site of the Southern Plains villagers located near Colony in Washita County, Oklahoma. It is the site of a prehistoric Plains Indian village, dating from AD 1330-1360, during the Washita River phase. The site is of historic importance for being a key element helping determine the chronology of prehistoric cultures in the region. It was declared a National Historic Landmark in 1964.

Leary Site, also known as 25-RH-1 or Leary-Kelly Site is an archaeological site near Rulo, Nebraska and the Big Nemaha River. The site now lies entirely on the reservation of the Iowa Tribe of Kansas and Nebraska. The area was once a village and burial site.

The Deffenbaugh Site is an archaeological site in southwestern Fayette County, Pennsylvania, United States. Located in Nicholson Township west of the borough of Smithfield, it was once occupied by a village of the Monongahela people.

The Buffalo Indian Village Site is an archaeological site located near Buffalo, Putnam County, West Virginia along the Kanawha River in the United States. This site sits atop a high terrace on the eastern bank of the Kanawha River and was once home to a variety of Native American villages including the Archaic, Middle Woodland and Fort Ancient cultures of this region. Buffalo Village was the site of one of the first systematic archaeological projects performed in West Virginia and it was added to the National Register of Historic Places in 1971.

The Plum Island Eagle Sanctuary is a 52-acre island in the Illinois River owned by the Illinois Audubon Society. It was purchased March 24, 2004 to act as a wildlife sanctuary, to protect foraging habitat for wintering bald eagles. It is close to Matthiessen State Park and adjacent to Starved Rock State Park.

Fewkes Group Archaeological Site, also known as the Boiling Springs Site, is a pre American history Native American archaeological site located in the city of Brentwood, in Williamson County, Tennessee. It is in Primm Historic Park on the grounds of Boiling Spring Academy, a historic schoolhouse established in 1830. The 15-acre site consists of the remains of a late Mississippian culture mound complex and village roughly dating to 1050-1475 AD. The site, which sits on the western bank of the Little Harpeth River, has five mounds, some used for burial and others, including the largest, were ceremonial platform mounds. The village was abandoned for unknown reasons around 1450. The site is named in honor of Dr. J. Walter Fewkes, the Chief of the Bureau of American Ethnology in 1920, who had visited the site and recognized its potential. While it was partially excavated by the landowner in 1895, archaeologist William E. Myer directed a second, more thorough excavation in October 1920. The report of his findings was published in the Bureau of American Ethnology's Forty-First Annual Report. Many of the artifacts recovered from the site are now housed at the Smithsonian Institution. It was added to the National Register of Historic Places on April 21, 1980, as NRIS number 80003880.

The Moccasin Bluff Site is an archaeological site located along the Red Bud Trail and the St. Joseph River north of Buchanan, Michigan. It was listed on the National Register of Historic Places in 1977, and has been classified as a multi-component Prehistoric site with the major component dating to the Late Woodland/Upper Mississippian period.

The Hoxie Farm Site (11Ck-4) is located on Thorn Creek in Thornton, Illinois Cook County Forest Preserve in Cook County, Illinois, near the city of Chicago. It is classified as a late Prehistoric to Protohistoric/Early Historic site with Upper Mississippian Huber affiliation.

The Anker Site (11Ck-21) is located on the Little Calumet River near Chicago, Illinois. It is classified as a late Prehistoric site with Upper Mississippian Huber affiliation.

The Hotel Plaza Site (Ls-36) is located near Starved Rock, on the Illinois River across from the Zimmerman Site (aka Grand Village of the Illinois. It is a multi-component site representing Prehistoric, Protohistoric and early Historic periods, with the main occupation being an early Historic component associated with the French Fort St. Louis.

The Gentleman Farm Site is located in LaSalle County, Illinois, on the Illinois River. It is a multi-component site with the main occupation being a Langford Tradition component of Upper Mississippian affiliation.

The Carcajou Point Site is located in Jefferson County, Wisconsin, on Lake Koshkonong. It is a multi-component site with Prehistoric Upper Mississippian Oneota and Historic components.

The Upper Iowa River Oneota Site Complex is a series of 7 Iowa archaeological sites located within a few miles of each other in Allamakee County, Iowa, on or near the Upper Iowa River. They are all affiliated with the Late Prehistoric Upper Mississippian Oneota Orr Focus. In some cases there are early European trade goods present, indicating occupation continued into the Protohistoric or early Historic period.

The Walker-Hooper Site (47-GL-65) is a multicomponent prehistoric site complex located on the Grand River in the Upper Fox River drainage area in Green Lake County, Wisconsin. It consisted of at least 2 village sites and several mound groups. It was excavated by S.A. Barrett under the auspices of the Milwaukee Public Museum in 1921 and again in 1967 by Guy Gibbon of the University of Wisconsin-Milwaukee. The major component of the site is an Upper Mississippian Oneota palisaded village. Other components were also present, mainly Late Woodland but also including Archaic, Early Woodland and Middle Woodland. 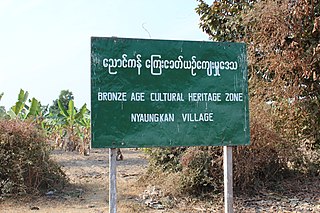 Nyaung-gan is a Bronze Age cemetery in central Myanmar, and was the first site in Myanmar to have artefacts dating to the Bronze Age. Burials found over two seasons (1998–1999) were found to have grave goods consisting of pottery filled with animal bones, beads, spear points, terracotta and jewelry, no iron was found at the site and that provides a good benchmark to start with dating of the site. The site was initially thought to be a significant site due to surface findings, so a team was assembled to investigate the validity of that claim. Myanmar is centrally located along trade routes that connect South, East, and Southeast Asia, and has great potential to show cultural influence from all stops along those trade routes. Another unique aspect of the site is that the skeletons found in the burials were left in situ, and a museum was constructed around them.