Trà Vinh ( listen ) is a province in the Mekong Delta region of Vietnam. The capital is Trà Vinh City.

They are further subdivided into 11 commune-level towns (or townlets), 85 communes, and nine wards.

Besides having mostly Vietnamese, Trà Vinh is populated with many members of the Khmer Krom ethnic group. They are partly members of the old Khmer Empire, later divided under political and historical turmoil. Trà Vinh also has one of the largest ethnic Hoa (Chinese) communities in Vietnam.

Bạc Liêu Province is a province of Vietnam. It is a coastal province, and is situated in the Mekong Delta region of the southern part of the country. 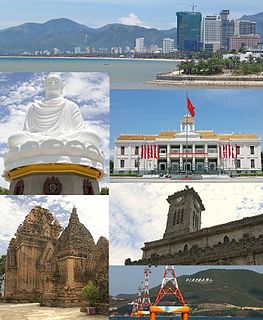 Cà Mau is a province of Vietnam, named after its capital city. It is located in the Mekong Delta of southern Vietnam, and is the southernmost of Vietnam's 58 provinces. It is bordered to the north by Kiên Giang and Bạc Liêu provinces, to the west by the Gulf of Thailand, and to the south and east by the South China Sea. 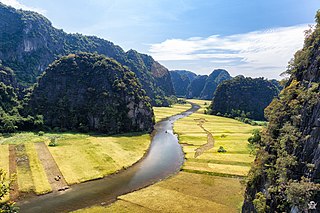 Vĩnh Long is a province located in the Mekong Delta of southern Vietnam. Its capital is Vĩnh Long. Its population is 1,046,390 and its area is 1,475 square kilometres (570 sq mi).

Trà Vinh is a provincial city in Vietnam. It is the capital city of the Trà Vinh Province.

Châu Thành is a district in the west of Tây Ninh Province in the Southeast region of Vietnam. 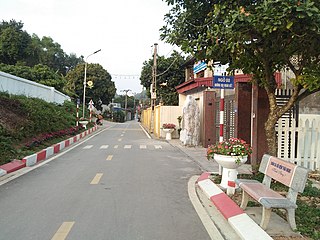 Đồng Hỷ is a rural district of Thái Nguyên Province in the Northeast region of Vietnam. As of 2003, the district had a population of 122,932. The district covers an area of 462 km2. The district capital lies at Hóa Thượng.

Duyên Hải is a rural district (huyện) of Trà Vinh Province in the Mekong Delta region of Vietnam. As of 2015 the district had a population of 82,393. The district covers an area of 300.47 km². The district capital lies at Long Thành town. The town of Duyên Hải was separated from the district in 2015.

Long Thành, tỉnh Đồng Nai may refer to several places in Vietnam, including:

Duyên Hải is a district-level town of Trà Vinh Province in the Mekong Delta region of Vietnam. The town was separated from Duyên Hải District in 2015.

District-level town, commonly known as town, a type of second tier subdivision of Vietnam is divided into 713 units along with urban district, district, municipal city, and provincial city have equal status. Also by virtue of Decree No. 42/2009/ND-CP, town are officially classified into Class-3 or Class-4. 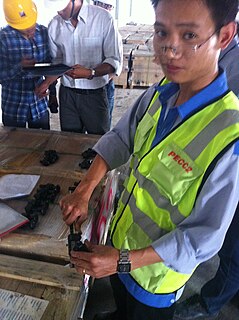 The Duyên Hải Power Station is a complex of under-construction coal-fired power plants in Vietnam. It is located in Mu U Hamlet, Dan Thanh Commune, Duyên Hải District, Trà Vinh Province. The complex will have a total capacity of 3,689 MW. It includes also a seaport coal terminal, to be built by China Communications Construction Company, with a capacity of 12 million tonnes of coal and oil per year.