"Nur wer die Sehnsucht kennt" is a poem by Johann Wolfgang von Goethe. The poem appeared in Goethe's novel Wilhelm Meister's Apprenticeship. It is one of the songs of Mignon, a character in the novel.

Aus Liebe weint man nicht is the sixteenth studio album released by German Schlager group Die Flippers. The album did not have the success of the group's previous album, but still sold well, going to gold status in Germany.

Katja Ebstein is a German singer. She was born in Girlachsdorf. She achieved success with songs such as Theater or Es war einmal ein Jäger. She was married to Christian Bruhn, who wrote many of her songs. She represented West Germany at the Eurovision Song Contest three times, in 1970, 1971, and 1980. Her best performance was in 1980 when she gained second place with the entry Theater. As noted by John Kennedy O'Connor in his book The Eurovision Song Contest - The Official History, Ebstein is the most successful performer to have taken part in the contest, without ever winning. She is the only singer to appear in the top three on three separate occasions. 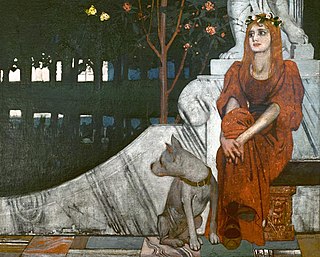 Sehnsucht is a German noun translated as "longing", "pining", "yearning", or "craving". Some psychologists use the word Sehnsucht to represent thoughts and feelings about all facets of life that are unfinished or imperfect, paired with a yearning for ideal alternative experiences.

Nur wer die Sehnsucht kennt is a poem by Goethe.

Christian Anders is an Austrian singer, musician, composer and author.

Andreas Martin is a German schlager singer. He came third in the OGAE Second Chance Contest 1989.

None but the Lonely Heart may refer to:

Veronika Fischer is a German singer.