Tréfimétaux is a French metallurgy conglomerate formed in 1962 by the merger of the Tréfileries et Laminoirs du Havre with the Compagnie française des métaux. In 1967 Tréfimétaux was acquired by Pechiney and in 1987 was sold to the Italian company SMI. Various plants were closed or sold over the years, leaving two factories in France at Givet (copper and brass tubes) and Niederbruck (copper bars). These factories are now operated by Tréfimétaux SAS, a subsidiary of Cupori (60%) and SMI (40%).

The Société J. Laveissière et Cie was founded in 1812 to manufacture copper products. In 1881 it was merged with the Société anonyme des établissements Secrétan to form the Société industrielle et commerciale des métaux. [1] In 1900 it became the Compagnie française des métaux, employing 500 workers in a 30,000 square metres (320,000 sq ft) factory in Saint-Denis. [2] Tréfileries et Laminoirs du Havre has its origins in the Société Lazare Weiller, created in 1883 by Lazare Weiller (1858–1928) to manufacture copper wire in Angoulême, which grew into a major metallurgy conglomerate. [3]

In 1962 the Compagnie française des métaux merged with the Tréfileries et Laminoirs du Havre to form Tréfimétaux. [4] In 1966 the wire drawing and steel cabling operations of Plant 2 at Le Havre were taken over by the Société des hauts fourneaux de Chiers-Châtillon, which opened a casting and rolling mill to manufacture small aluminum alloy cables in 1968. In 1969 Chiers-Châtillon merged with Cousin frères to form the Société Seine et Lys, which closed in 1972, laying off 425 people. [4] Many of those who lost their jobs were women. [5] In 1967 Tréfimétaux was acquired by Pechiney and became the copper division of that group, contributing 8% of the group's total. [6]

In 1971 Pechiney merged with Ugine Kuhlmann to form Pechiney Ugine Kuhlman (PUK). [7] From 1974 PUK suffered serious losses. [7] The threat of mass dismissals was first aired in 1974. [5] Between 1980 and 1987 the Tréfimétaux subsidiary reduced staff from 6,000 to 2,500 and closed the factories in Le Havre and Dives sur Mer. In 1980 it sold its cable production activities to Pirelli. [6] In 1982 PUK was nationalized and restructured, resuming the name of Pechiney, and in 1986 under Jean Gandois the state-owned group began a major expansion. [7]

The Tréfimétaux copper mill in Le Havre closed in 1980, and in 1981 Tréfimétaux closed its remaining operations in Le Havre. [4] It was succeeded by three companies: Cuivres et Alliages; Chiers, Châtillon Gorcy (which later became Hauts Fourneaux de la Chiers and then Technor); and Thomson Cables. [5] Cuivres et Alliages was closed in 1984. [5] In 1986 Tecnor, manufacturing wire cables and conductors, took an area of 158,000 square metres (1,700,000 sq ft) of the La Havre factories, of which 74,000 square metres (800,000 sq ft) were covered, with a line of casting, continuous rolling and wire drawing machines. [4] Technor ceased operations in 1989–90. [5] In January 2003 Tréfileries et Câbleries du Havre had 72 employees, falling to about 30 in April 2003. [5]

In 1987 Péchiney sold 100% of Tréfimétaux to the Italian company SMI. [6] In 1989 the Société Cuivre et Alliages, a subsidiary of Tréfimétaux since 1987, became a completely separate division. In 1990 the SMI subsidiary Europa Metalli acquired a majority of the shares of KM-Kabelmetal and became the largest copper processor in the world. In 1992 Tréfimétaux reorganized its rolled products division and consolidated its French distribution activities. In 1993 Europa Metalli and Tréfimétaux combined their management, which were divided into three operating segments: rolled products, tubes, and brass and copper bar. In 1995 Tréfimétaux, Europa Metalli of Italy and KM-Kabelmetal of Germany merged to become KME, a wholly owned subsidiary of SMI. [6] In 2005 production of bars was moved into subsidiaries, with the French subsidiary taking the name Tréfimétaux Brass SAS. On 1 May 2007 Tréfimétaux SA was renamed KME France SAS, and Tréfimétaux Brass SAS was renamed KME Brass France SAS. [6]

In 2016 European Copper Tubes (ECT), the parent of Cupori OY(fi) of Finland, became partners in the French operations of KME, covering the Givet (Ardennes) tube factory and the Niederbruck (Haut-Rhin) copper bar factory. The KME Italy tube factory in Serravalle Scrivia was included in the agreement. [6] Cupori's Pori unit in Finland was also included. Under the agreement, which took effect on 2 March 2016, Cupori acquired 60% of the capital while KME retained 40%. The company was chaired by Mirko Kovats. [8] KME France SAS was renamed to Tréfimétaux SAS. [6]

Pechiney SA was a major aluminium conglomerate based in France. The company was acquired in 2003 by the Alcan Corporation, headquartered in Canada. In 2007, Alcan itself was taken over by mining giant Rio Tinto Alcan. 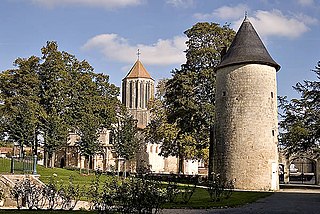 Surgères is a commune in the Charente-Maritime department in southwestern France. It is the home of the Surgères 48 Hour Race. 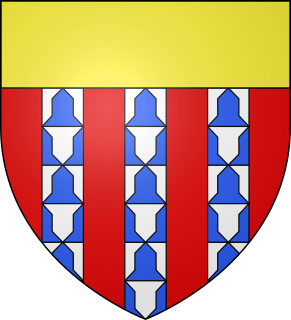 Walter III of Châtillon was a French knight and Lord of Châtillon, Montjay, Troissy, Crécy et Pierrefonds until his death in 1219. With his marriage, he became Count of Saint-Pol. He was also the Butler of Champagne and the Seneschal of Burgundy.

The Société de Construction des Batignolles was a civil engineering company of France created in 1871 as a public limited company from the 1846 limited partnership of Ernest Gouin et Cie.. Initially founded to construct locomotives, the company produced the first iron bridge in France, and moved away from mechanical to civil engineering projects in France, North Africa, Europe, and in East Asia and South America.

The Compagnie française de matériel de chemin de fer (CFMCF) was a French manufacturer of rail equipment, headquartered in Ivry-sur-Seine, with a factory in Maubeuge. 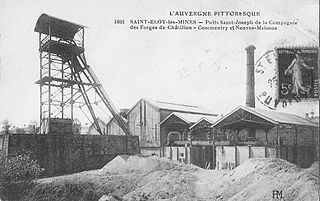 The Compagnie anonyme de Châtillon et Commentry was a French steelmaking company, formed as a limited company in 1862 from the Société Bouguéret, Martenot et Cie., a creation from the combination of several French iron makers in 1846.

Jean-Baptiste Benoît Eyriès was a French geographer, author and translator, best remembered in the English speaking world for his translation of German ghost stories Fantasmagoriana, published anonymously in 1812, which inspired Mary Shelley and John William Polidori to write Frankenstein and The Vampyre respectively. He was one of the founding members of the Société de Géographie, a member of the Société Asiatique, admitted to the Académie des Inscriptions et Belles-Lettres, awarded the Legion of Honour, elected a Foreign Honorary Member of the American Academy of Arts and Sciences in 1841, and has a street named after him in Le Havre and a mountain near Humboldt Bay.

The following is a timeline of the history of the city of Le Havre, France.

Georges-Simon Serullas was a professor of pharmacy notable for being the first to publish a work on Iodoform, an early antiseptic and disinfectant. 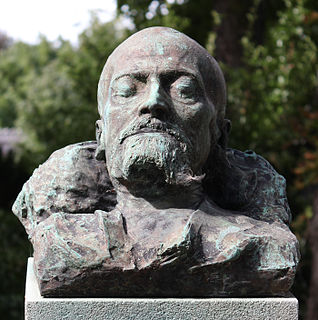 Henri Lafond was a French mining engineer and businessman who headed or sat on the board of numerous large companies and was involved in various industrial associations and committees both before and after World War II (1939–45). During the war he held a senior position in the Vichy government's Ministry of Industrial Production from 1940 to 1942. He was assassinated in March 1963, apparently by an OAS member due to his refusal to support the movement to oppose Algerian independence.

The Société des mines et fonderies de Pontgibaud was a French silver and lead mining and smelting company based in Pontgibaud, Puy-de-Dôme. It mined lead-silver ore deposits that had been exploited since Roman times. Later it opened another factory in Couëron in the Loire estuary, and then closed down the Pontgibaud mines and foundry. The Pontgibaud factory in Couëron diversified into other non-ferrous metal products using imported ore. After being sold and resold it finally closed in 1988.

The Compagnie française des métaux (CFM) was a French metallurgy company founded in 1892 that acquired the assets of a predecessor that had gone into liquidation. The company operated a number of plants in different locations in France, mainly making copper and aluminum products. In 1962 it was merged with Tréfileries et Laminoirs du Havre to form Tréfimétaux.

The Tréfileries et Laminoirs du Havre was an enterprise based in Le Havre, France, that manufactured copper wire, other copper products and products of other metals including bronze and aluminum. It was founded to serve the rapidly growing market for electrical power transmission and for telegraph and telephone cables. It grew into a massive industrial empire with factories in many French cities and abroad. In 1962 it merged with the Compagnie française des métaux and became Tréfimétaux. In 1967 Tréfimétaux was acquired by Pechiney. The various plants were closed or sold over the years. 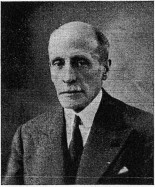 Georges Vésier was a French engineer who for many years headed the Compagnie française des métaux, a major metallurgy company in France specializing in copper and aluminum products.

Lazare Weiller was a French engineer, industrialist and politician. He was born in Alsace and received a technical education in England and in his cousin's copper factory in Angoulême. He was very interested in the physical sciences, particularly the use of electricity to transmit sound and images. He proposed a system for scanning, transmitting and displaying images that was the basis for experiments by various television pioneers. He sponsored early aviation experiments by the Wright brothers. He founded several companies including a telephone wire manufacturer, a taximeter manufacturer, the first Parisian cab company to use automobiles, an aircraft company and a wireless telegraphy company. He was a deputy during World War I (1914–18) and then a senator until his death.

Jules–Auguste Lair was a French lawyer, businessman and scholar. At the École des Chartes he studied palaeography, and was offered a position with the Archives, but he decided instead to become a lawyer. At the age of 25 he became director of a warehousing company, and over the next forty years was involved in various major enterprises including the first telephone network in France. At the same time, he always set aside time for historical work, and published many articles and books on aspects of French history from the Middle Ages to the French Revolution.