Along the road winding up the hill to the temple, the bell tower is clearly visible from afar. The tiled roof of the pagoda is also prominent, contrasting against the pine forests that surround it. The entrance of the temple is somewhat isolated, so there is a direct entrance to the temple with 61 steps or climbing, or the person can go directly past Tuyền Lâm Lake and then climb 222 steps past the triple gated entrance to enter the main courtyard in front of the temple. [1]

The temple is located on a plot of land encompassing 24 hectares. Of the 24 hectares, there are two hectares that are occupied by buildings, divided into two areas, the domestic areas and public areas. The domestic area is closed to the public. There are two domestic quarters, for monks and nuns respectively. Each of the domestic quarters has two meeting rooms for sangha, a meditation hall, a kitchen, dining room and a shed. Currently, there are approximately 50 monks and 50 nuns in religious practice at the temple. [1]

The public quarters is in a spacious plateau area on the grounds of the temple, at approximately 1300 m above sea level, overlooking Benhuit mountain and the wide expanse of Tuyền Lâm Lake. The public quarters was a building works undertaken under the architectural design of Ngô Viết Thụ and Nguyễn Tín, and was opened on March 13, 1994. The public quarters consistes of a ceremonial hall, flanked by the bell tower on the right and guest facilities on the left. At the front of the guest facilities lies a rose garden, and at the front slopes of the temple in front of the gate is an artificial lake with a capacity of 15,000 cubic metres. [1]

The statue in the main ceremonial hall is of Gautama Buddha seated on a lotus, flanked on either side by Văn Thù Sư Lợi and Phổ Hiền bodhisattvas, respectively known for their wisdom and dedication. An adjacent hall is used on the 14th and 29th of each lunar month, that is, the eve of the full moon and the new moon, the abbot holds a discussion session on meditation with meditation students, including lay Buddhists. [1]

One of the objectives of the temple is to recreate the spirit of Zen Buddhism during the Trần Dynasty that ruled Vietnam from 1225 to 1400. The tradition practiced here was started by Emperor Trần Nhân Tông, who abdicated the throne in favour of his son Trần Anh Tông to become a Buddhist monk and founded a new tradition in Zen. He had incorporated the three sects of Zen that had come to Vietnam from China, the Tỳ-ni-đa-lưu-chi, Vô Ngôn Thông and Thảo Đường into a new Vietnamese Zen tradition, known as Trúc Lâm. This came after he had led royal troops in defeating Nguyên Mông before retreating to Yên Tử mountain to begin his religious life before travelling around the country to expound the dharma. [1]

The Trúc Lâm Zen tradition emphasizes the habit of applying Buddhist practice in whatever surroundings one finds oneself in, for sangha and laypeople alike. [1]

Thích Nhất Hạnh was a Vietnamese Thiền Buddhist monk, peace activist, prolific author, poet, teacher, and founder of the Plum Village Tradition, historically recognized as the main inspiration for engaged Buddhism. Known as the "father of mindfulness", Nhất Hạnh was a major influence on Western practices of Buddhism.

Thích Thiên-Ân (釋天恩) was a teacher and Buddhist monk of Vietnamese Thiền (Zen) Buddhism and was active in the United States from 1966 to 1980. He was ordained at Chua Chau Lam in Hue, Vietnam.

Da Lat, is the capital of Lâm Đồng Province and the largest city of the Central Highlands region in Vietnam. The city is located 1,500 m (4,900 ft) above sea level on the Langbian Plateau. Da Lat is one of the most popular tourist destinations in Vietnam. 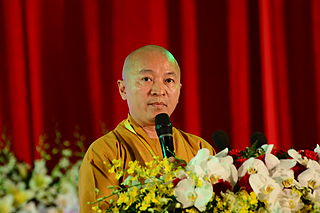 The One Pillar Pagoda, formally belongs to an architecture complex called Diên Hựu tự [延祐寺] which means Extend Bless pagoda. The pagoda is a historic Buddhist temple in the central Ba Đình district, Hanoi, the capital of Vietnam. The most famous part of this architecture complex is Liên Hoa Đài [蓮花臺] which is a temple with special structure: a building laid on one pillar. The original pagoda was built in 1049, had some additions and be perfected in 1105. It is regarded alongside the Perfume Temple, as one of Vietnam's two most iconic temples. 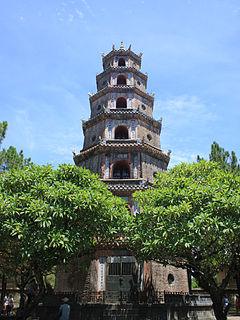 Linh Sơn Pagoda is a notable Buddhist temple in the resort town of Đà Lạt, Vietnam. 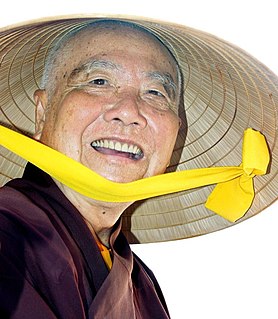 Thích Thanh Từ is a Vietnamese Zen Buddhist monk. He has been influential with increasing traditional Vietnamese Buddhism practices within the country.

Huyền Quang (玄光), 1254–1334, his real name is Lý Đạo Tái (李道載), he was born in Vạn Tải village, Nam Sách District, Lạng Giang. Now it is Vạn Tải village, Thái Bảo commune, Gia Bình district, Bắc Ninh province. He was very knowledgeable, passed both Hương examination and Hội examination. He passed the Zhuangyuan exam in 1272 or 1274 and was appointed to work in the Imperial House Institute of the court. After the resignation, he followed Trần Nhân Tông to Trúc Lâm. As a Vietnamese Thiền Buddhist monk, the third Trúc Lâm Yên Tử. He was a great poet with many preserved poems. Along with Trần Nhân Tông and Pháp Loa, he is considered a great Thiền Buddhist master of Vietnam and it is considered as both of them as equal to the Six patriarchs of Zen Buddhism or the 28 Patriarchs of Indian Meditation.

Ngô Thì Nhậm was an important Vietnamese scholar and official who served several regimes during the turbulent last decades of the eighteenth century. He had served as an official for the Trịnh lords before losing his position as a result of a coup that followed the death of the Trịnh lord Trịnh Sâm in 1782.

Tuyền Lâm Lake is a man-made lake in Đà Lạt city, in Lâm Đồng Province, Vietnam. It is one of 21 National Tourism Areas. Trúc Lâm Temple can be reached by cable car.