The Tržan Castle (Croatian pronunciation:  [ˈtr̩̂ʒan] ; Croatian : Tržan-grad or Utvrda Tržan) is a ruined medieval castle above the village of Modruš in the northern part of historical Lika region, central Croatia. Before (from the 11th century) the administrative seat of the former Modruš County (later renamed Modruš-Rijeka County), it is today a ruin in the Josipdol Municipality in the southern part of the Karlovac County.

Having been built on a ridge of a steep hill 670 metres (2,200 ft) above sea level on the eastern slopes of the Velika Kapela mountain, the castle was at a strategic place overlooking the road that connected the Adriatic Sea and the Pannonian Basin since ancient times. The road in question connected the Roman towns of Senia (present-day Senj) and Siscia (present-day Sisak). It was later, during the 18th century, reconstructed, improved and renamed as Josephina road.

According to the famous Croatian historian Vjekoslav Klaić (1849–1928), a kind of a castle or stronghold most probably existed above Modruš already at the beginning of the 9th century, during a war between Borna, Duke of Dalmatian Croatia, and Ljudevit Posavski, Duke of Lower Pannonia.

Almost ideal position, dominating over the surrounding area, made Tržan Castle never to be conquered by anyone in its history, although the town of Modruš below the castle was plundered and burned by the Ottomans in 1493, just before the battle of Krbava Field.

From 1193 the castle was property of the Knezes (Princes) of Krk, (later, from around 1430, known as the Frankopans), a distinguished Croatian noble family. Bartol II Krčki /Bartholomew II of Krk/ was given the whole vast Modruš estate, including the castle, by the Croato-Hungarian king Bella II (III) for his merits in the wars he fought. The next more than 350 years Tržan was owned by the Frankopans, not only as one among the many castles in their property, but as the main seat and stronghold of the family in the whole continental part of Croatia. From thence ruled, among others, Ivan V Krčki /John V of Krk/ (born before 1343, died 1393) and his son Nikola IV /Nicholas IV/ (born around 1360, died 1432), the most powerful man in Croatia at the beginning of the 15th century, both Bans (Viceroys) of Croatia. They reconstructed and enlarged the old, irregular shaped castle, which was from around 1437 called Tržan or Tržan-grad, because of an increased trade that was going on there (Croatian : tržiti means to trade or to sell).

The walls, bastions and towers were built of hewn stone (ashlar) in the „fishbone“ style and represented a kind of masterpiece of the contemporary building skill. There are some signs which indicate that the foreign building masters took part in the works, most probably those from the Republic of Venice. The castle itself consisted of central part with a large guard tower and a palace as residence for members of the princely family with its supporting staff, northern part with outbuildings for economic services, various workshops, warehouses, water tanks and rectangular defending tower, and southern part containing mostly facilities for retail trade, accommodation for traders and travellers etc. Following the walls and bastions of the castle, there were defensive walls, about 1,200 metres (3,900 ft) long, around the town of Modruš, descending the slope of the hill.

In 1449 a well-known partition of the huge Frankopan estates, spread throughout central and western Croatia, took place, as the eight sons of Nikola IV Frankopan agreed to split and share their father's property (legally valid) among themselves. In the course of this, the whole Modruš estate belonged to Stjepan III /Stephen III/ (born before 1416, died around 1481–84); in the sharing inheritance document it was written: „...to Stjepan belongs the market town Modruš with the Tržan Castrum“... It was a time of constant and steady rise, a „golden age“ of Modruš, that reached its peak in 1460, as the town became a seat of a bishop.

Bernardin Frankopan (1453–1529), the only son of Stjepan III, successfully managed the whole of his property further from the Tržan Castle, although there was increasing threat of the Ottoman raids from the already conquered Bosnian territory, east of Modruš County. This led to decrease of importance of Tržan by the end of the 15th century, and the population of the whole area started to move away more and more from its old places of residence to the other, safer parts of Croatia and neighbouring countries, not willing to live in endangered territory.

In the first half of the 16th century the castle was always less maintained and repaired than needed, and after 1553 came under control of the military authorities of the Croatian Military Frontier. A relatively small military deployment unit was permanently stationed there. After several unsuccessful attempts to renovate or rebuild the more and more severely damaged parts of the castle during the 17th and 18th century, the military authorities decided in 1791 to abandon it. Following the negligible Ottoman danger at that time, they presumed that it was not necessary to keep soldiers in Tržan and it was left to its own destiny, becoming a badly damaged castle ruin today.

The Frangipani family, was a Croatian noble family, whose members were among the great landowner magnates and high officers of the Kingdom of Croatia in union with Hungary.

Ogulin is a town in north-western Croatia, in Karlovac County. It has a population of 4,192 (2021), and a total municipal population of 13,915 (2011). Ogulin is known for its historic stone castle, known as Kula, and the nearby mountain of Klek. 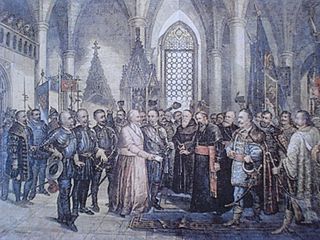 The 1527 election in Cetin was an assembly of the Croatian Parliament in the Cetin Castle in 1527. It followed a succession crisis in the Kingdom of Hungary caused by the death of Louis II, and which resulted in the Kingdom of Croatia joining the Habsburg Monarchy. The charter electing the Habsburg Archduke of Austria Ferdinand I as King of Croatia was confirmed with the seals of six Croatian nobles.

Nicola Frangipani in croatian language Nikola IV Frankopan was a Croatian nobleman and the Ban of Croatia and Dalmatia from 1426 to 1432.

Trsat is part of the city of Rijeka, Croatia, with a historic castle or fortress in a strategic location and several historic churches, in one of which the Croatian noble Prince Vuk Krsto Frankopan is buried. Trsat is a steep hill, 138 m high, rising over the gorge of the Rječina river, about a kilometre away from the sea; strategically significant from the earliest times right up to the 17th century, it is today a major Christian pilgrimage centre and home to a statue of Pope John Paul II who came to Trsat as a Pilgrim in 2003. Today, the University of Rijeka's newly constructed Campus lies in the western part of Trsat. 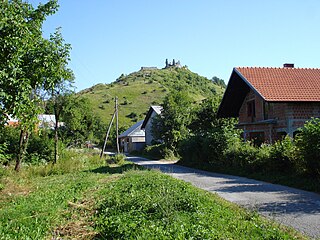 Modruš is a village, former bishopric and current Latin Catholic titular see in the mountainous part of Croatia, located south of its municipality's seat Josipdol, on the easternmost slopes of Velika Kapela mountain, in northern Lika.

Dobrinj is a village and municipality in the Primorje-Gorski Kotar County in northwestern Croatia, on the island of Krk. There are 2,078 inhabitants in the municipality, with 91% Croats. 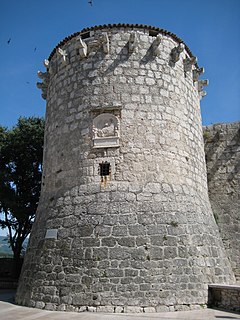 Frankopan Castle is a castle located on the southwest coast of the island Krk, in the ancient town of Krk, which is one of the oldest towns in the Adriatic, in Croatia.

This is the family tree of the Frangipani family, a Croatian noble family, from 1115 to 1671.

Bernardin Frankopan (1453–1529) was a Croatian nobleman and diplomat, a member of the influential Frangipani (Frankopan) noble family of Croatia. As one of the wealthiest and most distinguished aristocrats in the kingdom in his day, he had one of the leading roles in mounting defences of Croatian statehood against the Ottoman expansion.

Kožljak is a village in Istria County, Croatia, in the municipality of Kršan. In 2011, the population of the village is 160. The settlement besides of the village consists of nearby homonymous medieval ruinous castle.

Dujam (II) comes veglae, also Dujam II of Krk, was a Croatian noble, an early member of the illustrious Frangipani family, who took control of the Adriatic Sea's western coast in Croatia, which had been in a personal union with Hungary since 1102. As Count of Krk, he also ruled the area of Modruš and Senj.

Kurjaković, also known as the Counts of Krbava, were a Croatian noble family that originated from the noble tribe of Gusić. It formed at the end of the 13th century, as descendants of Kurjak. They reached their peak as magnates between mid-14th and mid-15th century, having tight connections and high official positions at the Hungarian royal court, and dissolution in 1531 when the estates of magnate Ivan Karlović went to Nikola III Zrinski. Two members were Ban of Croatia, as well two were founding members of Order of the Dragon.

The Mogorović family was one of the twelve noble tribes of the Kingdom of Croatia, mentioned in the Pacta conventa and Supetar Cartulary. They were initially mentioned in the 12th and 14th centuries in the hinterland of Biograd na Moru and Zadar in Dalmatia, and since the 13th century in the region of Lika, where they branched into most prominently Disislavić noble family, besides being divided into other fourteen noble branches by 15th and 16th century. As experienced warriors, they actively participated in the Croatian–Ottoman wars. Direct descendants of the tribe live even today in Croatia.

Blagaj is a medieval ruined castle located on the right bank of the Korana river in modern Karlovac county, Croatia. Around it formed an eponymous village, Blagaj. It has a rectangular floorplan, and was once one of the larger castles in the region, with a central tower, similar to Belaj, Karlovac county. The old parish church of Sv. Duh is proposed to have been situated not far from the ruins, where there are today two churches next to each other. 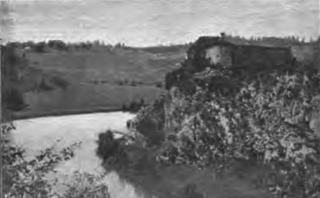 Zvečaj is a medieval ruined castle located on the left bank of the Mrežnica river in modern Karlovac county, Croatia. Around it formed an eponymous village, today separated into upper and lower. It has a rectangular floorplan, with a central tower. It survived in good condition much longer than most castles in the region.

The Tugomirić family, sometimes called Tugomerić or Tugomorić, was one of the twelve noble tribes of the Kingdom of Croatia, mentioned in the Pacta conventa (1102). 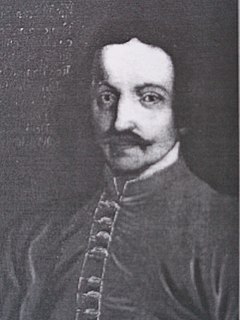 Giorgio III Frangipani was a Croatian nobleman, a member of the Slunj branch of the Frankopan noble family, very powerful and influential in the Croatian Kingdom. He was proprietor of many estates and castles, among which Slunj Castle and Cetin Castle. He is best known for organizing and hosting the assembly of the Croatian Parliament in the Cetin Castle by the end of 1526, that followed a succession crisis in Croatia and Hungary caused by the death of King Louis II, which resulted in the election of Ferdinand I of Habsburg, the Archduke of Austria, as King of Croatia. 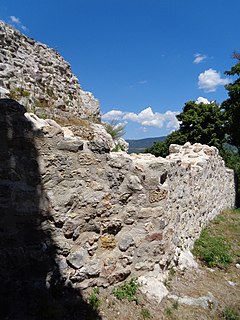 Udbina Castle is a ruined medieval fortified structure in the town of Udbina, Lika-Senj County, Croatia. Built on the top of a hill at the northern end of the town, it overlooks a large part of the Krbava field, just above the place where the fierce and bloody battle of Krbava between the army of the Kingdom of Croatia and the Ottoman Empire was fought in 1493. Once property of the powerful Kurjaković noble family, the castle was captured by the Ottoman invaders in 1527. It was recaptured in 1689, but later, by the end of the Ottoman wars during the 19th century, uncared-for and slowly turned into ruin.

Fortica Fortress is a ruined early modern fortified structure in the town of Otočac, Lika-Senj County, Croatia. Built on the top of a flat hill at the northern end of the town, it overlooks a large part of Otočac and Gacka River valley. Once a military-defensive stronghold on the line of defense against Ottoman Turks, it turned later slowly, by the end of the Ottoman wars during the 19th century, being uncared-for, into a ruin. Recently, the fortress has been partially restored.