The Vietnam War, also known as the Second Indochina War, and in Vietnam as the Resistance War Against America or simply the American War, was an undeclared war in Vietnam, Laos, and Cambodia from 1 November 1955 to the fall of Saigon on 30 April 1975. It was the second of the Indochina Wars and was officially fought between North Vietnam and South Vietnam. North Vietnam was supported by the Soviet Union, China, and other communist allies; South Vietnam was supported by the United States, South Korea, the Philippines, Australia, Thailand and other anti-communist allies. The war is considered a Cold War-era proxy war from some US perspectives. It lasted some 19 years with direct U.S. involvement ending in 1973 following the Paris Peace Accords, and included the Laotian Civil War and the Cambodian Civil War, resulting in all three countries ridding themselves of colonial rule, establishing independent governments, and becoming communist states in 1975.

Trần Hanh, realname is Trần Huy Hanh, was born in 1932 to a poor family in Lộc Vượng commune, Mỹ Lộc, Nam Định. [1] He began to participate in Youth Union in December 1946 and the revolutionary movement in April 1947. [2] 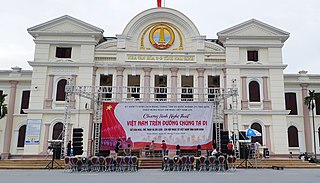 The Ho Chi Minh Communist Youth Union is the largest social-political organisation of Vietnamese youth. The union is under the leadership of the Communist Party of Vietnam. The organization was founded in March 26, 1931 and was led and trained by Ho Chi Minh.

In the military, a political commissar or political officer, is a supervisory officer responsible for the political education (ideology) and organization of the unit they are assigned to, and intended to ensure civilian control of the military.

The Mikoyan-Gurevich MiG-17 is a high-subsonic fighter aircraft produced in the USSR from 1952 and operated by numerous air forces in many variants. It is an advanced development of the very similar looking MiG-15 of the Korean War. The MiG-17 was license-built in China as the Shenyang J-5 and Poland as the PZL-Mielec Lim-6. 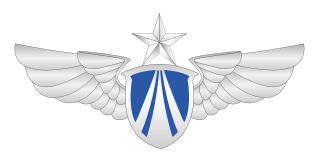 After the war, Trần Hanh was appointed Deputy Chief of Staff (Tham mưu phó) of the Vietnam People's Air Force in August 1976. In January 1977 Trần Hanh was sent by the Politburo of the Communist Party of Vietnam to be the Secretary (Bí thư) of the Ho Chi Minh Communist Youth Union for a short time before returned to the Air Force as Deputy Commander in June 1977. Trần Hanh became the Commander of the Air Force in March 1986 and Deputy Chief of the General Staff (Phó Tổng tham mưu trưởng) of the Vietnam People's Army from April 1989 to October 1996. From November 1996 to December 1999 Trần Hanh was appointed to the position of Deputy Minister of Defence of Vietnam before retired in 2000. He was also deputy of the National Assembly of Vietnam and member of the Central Committee of the Communist Party of Vietnam. [2] After retired, Trần Hanh was elected to the General Secretary (Tổng thư ký) of the Vietnam War Veterans Association (Hội cựu chiến binh Việt Nam). [5] [6]

The Sino-Vietnamese War, also known as the Third Indochina War, was a brief border war fought between China and Vietnam in early 1979. China launched an offensive in response to Vietnam's invasion and occupation of Cambodia in 1978. 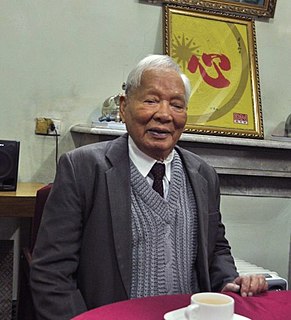 Lê Đức Anh is a Vietnamese politician and general who served as the fourth President of Vietnam from 1992 to 1997. He previously led the Vietnamese forces in Cambodia throughout the 1980s. He was regarded as a conservative who advocated maintaining tight party control over domestic policies. 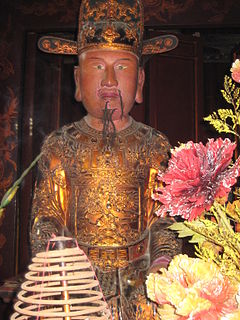 Lê Long Đĩnh As known as Lê Ngọa Triều (黎臥朝) was the last emperor of the Anterior Lê Dynasty of Đại Cồ Việt, from 1005 to 1009. After killing his predecessor and brother Lê Long Việt, he took the throne and named his era Cảnh Thụy. His mysterious death at aged 24 led to the fall of Anterior Lê Dynasty, then all of power was seized by House of Lý. In some history book, he was portraited as the debauched, cruel emperor.However, there were still a lot of temples created that people still worship him until now and recently, some historians proved that some rumours about his ruling style was aggrandise, even seen as fabrication.

Nguyễn Hữu An was a general in the People's Army of Vietnam. 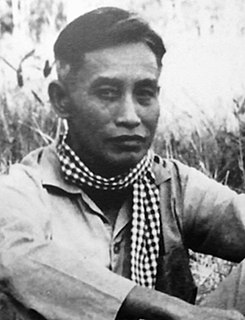 1st Corps or Quyết thắng Corps is one of the four regular army corps of the Vietnam People's Army. First organised in 1973 during the Vietnam War, 1st Corps had a major role in the Ho Chi Minh Campaign that ended the war. Today the corps is stationed in Tam Điệp District, Ninh Bình.

2nd Corps or Hương Giang Corps is one of the four regular army corps of the Vietnam People's Army. First organised in 1974 during the Vietnam War, 2nd Corps had a major role in the Ho Chi Minh Campaign that ended the war. Today the corps is stationed in Lạng Giang District, Bắc Giang.

4th Corps or Cửu Long Corps is one of the four regular army corps of the People's Army of Vietnam. First organized in 1974 during the Vietnam War, 4th Corps had a major role in the Ho Chi Minh Campaign and the Cambodian–Vietnamese War. Today the corps is stationed in Dĩ An, Bình Dương.

Đoàn Khuê was a Vietnamese Army general and Minister of Defence from 1991-1997.

Trần Văn Quang was a colonel general of the People's Army of Vietnam. He was a deputy chief of staff of PAV and a vice minister of Vietnam's Ministry of Defence. During the Battle of Dien Bien Phu, Quang was the head of Department of Operations.

Phan Văn Giang is a Vietnamese Army general, the current Chief of the General Staff of the Vietnam People's Army and First Deputy Defence Minister.