Trần Khoa Điển (born 25 February 1987) is a Vietnamese footballer who plays as a goalkeeper for V-League (Vietnam) club Dong Thap FC. [1] He was invited by other teams like Binh Dinh, but he chose to play with his home team. [2]

Từ điển bách khoa Việt Nam is a state-sponsored Vietnamese language encyclopedia that was published in Vietnam in 2005.

Prince of Bảo Nghĩa Trần Bình Trọng (1259–1285) was a general of the Trần Dynasty well known for his heroic action in the war of Dai Viet against the second Mongol invasion. After the capture of Trần Bình Trọng by the army of the Yuan Dynasty, Kublai Khan's prince Toghan attempted to convince the Đại Việt general to surrender by telling him about the situation of the Trần Dynasty, saying that Trần Bình Trọng would get a minister's post in China. However, the general rejected his proposition, and thus, Toghan had him executed. Today, he is widely known as an example of patriotism in Vietnam. The story about Marquis Bảo Nghĩa is taught in Vietnamese textbooks and many places in Vietnam are named in honour of this national hero.

Lê Văn Hưu (1230–1322) was an historian of the Trần Dynasty. He is best known for his work the Đại Việt sử ký, the first comprehensive historical record of the history of Vietnam. Although the book was lost during the Fourth Chinese domination in Vietnam, its contents, including Lê Văn Hưu's comments on various events in the history of Vietnam, were used by other Vietnamese historians as a base for their works, notably the Đại Việt sử ký toàn thư by Ngô Sĩ Liên.

The Đại Việt sử ký is the official historical text of the Trần dynasty, that was compiled by the royal historian Lê Văn Hưu and was finished in 1272. Considered the first comprehensive account of the history of Vietnam, the 30-volume book covered the period from Triệu Đà, the first king of the Triệu dynasty, to Lý Chiêu Hoàng which was the empress regnant and the last ruler of the Lý dynasty. Although it was lost during the Fourth Chinese domination in Vietnam, the contents of the Đại Việt sử ký, including Lê Văn Hưu's comments about various events in the history of Vietnam, were used by other Vietnamese historians as a base for their works, notably the Đại Việt sử ký toàn thư by Ngô Sĩ Liên. 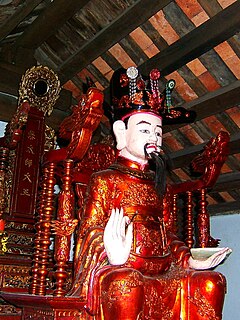 Lê Văn Thịnh, courtesy name Mậu Phu (茂夫), was an official in the royal court of the Lý dynasty. Ranking first in the first imperial examination of the Lý Dynasty, Lê Văn Thịnh was appointed tutor for Lý Nhân Tông and was gradually promoted to the position of chancellor of the Lý Dynasty due to his achievements, especially in the negotiation with the Song dynasty about the return of occupied land by the Song army to Annam in 1086. 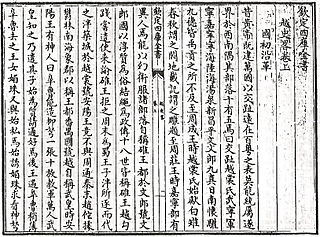 The Đại Việt sử lược or Việt sử lược is an historical text that was compiled during the Trần Dynasty. The 3-volume book was finished around 1377 and covered the history of Vietnam from the reign of Triệu Đà to the collapse of the Lý Dynasty. During the Fourth Chinese domination of Vietnam, the book, together with almost all official records of the Trần Dynasty, was taken away to China and subsequently collected in the Siku Quanshu. Đại Việt sử lược is considered the earliest chronicles about the history of Vietnam that remains today.

Kiều Công Tiễn or Kiểu Công Tiện (矯公羡) was a general in the court of Dương Đình Nghệ, a Vietnamese Jiedushi of Tĩnh Hải quân who took over the position in 931. In 937 Kiều Công Tiễn assassinated the Jiedushi to seize his position and thus provoked a revolt led by Ngô Quyền who sought revenge his lord and father-in-law Dương Đình Nghệ. In response to the attack, Kiều Công Tiễn appealed to Liu Yan, the emperor of Southern Han, for reinforcements but he was defeated and executed by Ngô Quyền before the army of Southern Han entered the country. Later, Ngô Quyền had a decisive victory over the Southern Han in the Battle of Bạch Đằng River and marked the independence of Vietnam from Chinese authorities. 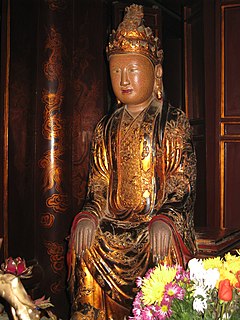 Dương Thị Ngọc Vân (楊氏玉雲, ?–1000) courtesy name Vân Nga (雲娥) was the only empress dowager of the Đinh Dynasty and afterwards empress of Lê Đại Hành, the first emperor of the Early Lê Dynasty. When her husband Đinh Tiên Hoàng was assassinated in 979, Dương Vân Nga became the Empress Dowager of the Đinh Dynasty as her son Đinh Phế Đế succeeded the throne. During the short-lived reign of Đinh Phế Đế, Dương Vân Nga and the general Lê Hoàn jointly held the regentship for the 6-year-old emperor, later it was Dương Vân Nga and general Phạm Cự Lượng who decided to cede the Đinh Dynasty's throne for Lê Hoàn in 980 so that Đại Cồ Việt could stand the Song Dynasty's invasion with a capable ruler. Subsequently, Lê Hoàn entitled Dương Vân Nga as his empress, hence she became the first woman in the history of Vietnam to be married to two emperors.

Khúc Thừa Dụ or Khúc Tiên Chủ (830–907) was a Vietnamese Jiedushi of Vietnam and Jinghai-jun, in the early 10th century.

Khúc Hạo (860–917) was the Vietnamese self-declared jiedushi of northern Vietnam from 907 to 917 succeeding his father Khúc Thừa Dụ. 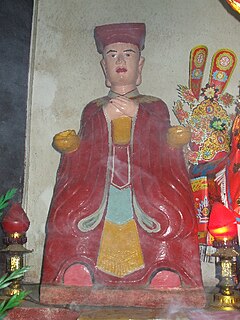 Mạc Mậu Hợp was the fifth and effectively last reigning emperor of the Mạc dynasty from 1562 to 1593.

Trần Văn Giáp was a Vietnamese historian who wrote the first widely published histories of Buddhism in Vietnam in French. The two volumes, for Annam and Tonkin respectively were published in Paris in 1932. Giáp was an authority on Hán-Nôm literature. On his return to Vietnam he published various other histories in Vietnamese, both in Latin alphabet quốc ngữ and Chinese chữ Nho.

Quế Ngọc Hải is a Vietnamese footballer who is central defender for Viettel and captains of the Vietnam national football team.