Last updated December 05, 2021
In this Vietnamese name, the surname is Trần, but is often simplified to Tran in English-language text. In accordance with Vietnamese custom, this person should be referred to by the given name, Bình.

Trần Tử Bình (1907–1967) was a Vietnamese revolutionary who later became one of the first generals of the Democratic Republic of Vietnam (1948) and Vietnam's Ambassador to People's Republic of China (1959–1967).

Trần Tử Bình was originally named Phạm Văn Phu. Later, during revolutionary time he changed his name into Trần Tử Bình (a name which means "man who can die for peace"). He is most famous for being a leader of Phú Riềng Đỏ labor movement in 1930 and one of the most prominent diplomats of Vietnam, who worked as the Ambassador of Vietnam to China during period 1959–67.

Trần Tử Bình was born in an all-Catholic village named Tieu Dong, Bình Lục District, Hà Nam Province in the Red River Delta of northern Vietnam. His family was poor peasants but the parents managed to scrape together enough money to enroll Trần Tử Bình at a seminary. At school, he was remembered as a brilliant but very restive and steady student. In 1926, because of participating in the public mourning the death of Phan Chu Trinh, a prominent Vietnamese scholar-patriot, and mobilizing the students and young people in the neighbourhood to protest against French colonial rule in Vietnam, Trần Tử Bình was expelled from the seminary. His parents and relatives were very much disappointed about it but the young man did not regret. He had a strong belief that what he did was an obligation of any responsible Vietnamese. At that moment, without yet knowing it, Trần Tử Bình joined the ranks of the young patriot intelligentsia, a group destined to play a critical role in modern Vietnamese history.

In 1927 he signed up to a working labor on Michelin's Phú Riềng rubber plantation in the distant region of southern Vietnam Cochinchina. [1] This decision was another blow to the family because, even without a school diploma, with his education Trần Tử Bình could have found a respectable job as a village clerk or landlord's agent. Again Trần Tử Bình was determined to break away, to seek adventure, to test his physical and spiritual powers in the totally unfamiliar land. This decision proved crucial for his entire life.

It is during this period working in Phú Riềng plantation that he first met communist revolutionaries and learned about the Marxist–Leninist theory. In 1929 he joined the Indochina Communist Party. On 3 February 1930 he became the Party Secretary of Phú Riềng and directly led a revolt of more than 5000 workers against the cruel French colonial exploitation at rubber plantation. The movement was repressed by French, Phú Riềng strike leaders were all imprisoned, nonetheless it forced the Michelin company to make certain changes to improve labor's working and living conditions. The Phú Riềng's labor movement 1930, also known as Phu Rieng Do, has become known as the first big labor movement in the history of Vietnam. This remarkable period is chronicled in Trần Tử Bình's memoir, Red Earth: A Vietnamese Memoir of Life on a Colonial Rubber Plantation, first published in Hanoi in 1965, and translated into English in 1985.

In 1936, the Popular Front forced the French colonial government to release some political prisoners from Côn Đảo. Trần Tử Bình was one of them. After being amnestied from Côn Đảo he returned home to work as a clerk in Bình Lục District and secretly continued to take part in communist activities against French. From 1936-1940 Trần Tử Bình was appointed as communist party secretary of Bình Lục District and then party secretary of Ha Nam Province.

In 1940 he was elected by the communist party as a member of Northern Region (Tongkin) Committee (Xu Uy Bac Ky) and Commissar of Interregional Network C (including Hà Nam, Nam Đinh, Thái Bình, Ninh Binh Provinces) and network D (Vinh Phuc, Phuc Yen, Phu Tho, Tuyen Quang Provinces) in 1941 and 1943. He became one of the most wanted objects of French Gendarmerie in TongKing during the 1940s.

On 24 December 1943 Trần Tử Bình was arrested again in Thái Bình Province and was imprisoned in Hà Nam Prison. In early 1944, after an unsuccessful attempt at jailbreak, he was sent to Hỏa Lò Prison (Hanoi), where he became one of the organizers of a famous collective escape for over 100 political prisoners.

After he returned to the rear, Trần Tử Bình was appointed as a standing member of Xu Uy Bac Ky and was in charge of establishment and development of Hoa-Ninh-Thanh military base for the League for the Independence of Vietnam (Viet Minh).

On August 14, 1945, the Japanese surrendered to the Allies. The leaders of Viet Minh decided to act promptly to seize the power from the weak and helpless Trần Trọng Kim's pro-Japanese puppet government before the French returned. On 19 August 1945, Trần Tử Bình and Nguyen Khang, the two representatives of Xu Uy Bac Ky remained in Hanoi, directly commanded the general uprising in Hanoi and some neighboring provinces which lead to a start of the successful August Revolution of 1945.

After the establishment of the Democratic Republic of Vietnam, Trần Tử Bình was appointed as Vice Rector, Political Commissar of Tran Quoc Tuan Military Training Academy.

In 1947, he became Deputy Secretary of the General Political Department of Vietnamese People's Army. Late 1947, together with Le Thiet Hung, he successfully led the Vietnamese military forces to a military victory at Song Lo front.

From 1950-56 he served as Political Commissar of the Vietnam's Ground Forces Officer Academy, which at that time was based in China. Since 1951 he was elected to be a representative of the Army Forces to the Third and Fourth National Communist Party Congress and member of the National Assembly.

In 1959, Trần Tử Bình was appointed as the Ambassador of Vietnam to the People's Republic of China and Mongolia. He worked as ambassador in China for two terms (1959–1967), perfectly performed his duty and contributed greatly to the development of cooperative relations between China and Vietnam.

On 11 February 1967, he died at the age 60 due to hypertension in Hanoi. He was honoured posthumously with the Gold Star medal, the most noble medal of the Socialist Republic of Vietnam, befitting his long service to the state and people of Vietnam. 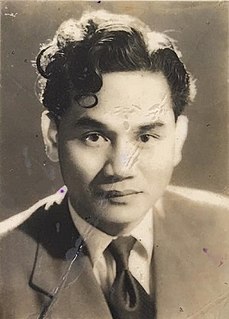 Ngô Xuân Diệu was a Vietnamese poet, journalist, short-story writer, and literary critic, best known as one of the prominent figures of the twentieth-century Thơ mới Movement. Heralded by critics as "the newest of the New Poets", Xuân Diệu rose to popularity with the collection Thơ thơ (1938), which demonstrates a distinct voice influenced by Western literature, notably French symbolism. He was one of the first to employ Western poetic devices like enjambment in Vietnamese poetry, while occasionally adhering to traditional forms like lục bát. Between 1936 and 1944, his poetry was characterized by a desperation for love, juxtaposed with a desire to live and to experience the beauty of the world. After joining the Vietnamese Communist Party in 1945, the themes of his works shifted towards the Party and their resistance against the French and the Americans. When he died in 1985, he left behind about 450 poems, as well as several short stories, essays, and literary criticisms.

Phú Riềng Đỏ or the Red Phú Riềng was a communist-instigated strike that took place in Michelin's Thuân-Loï rubber plantation near Phú Riềng in the Biên Hòa Province of Cochinchina on 4 February 1930. Most of the plantation labourers were peasants from Tonkin and Annam driven by poverty to seek livelihood in southern Vietnam. Working and living conditions on the plantations, however, were harsh and this situation was capitalised by the communists to launch the strike. Although the strike lasted only about a week, the unfolding of events at Phú Riềng Đỏ was significant as it served as a harbinger for important tactical and strategic considerations for other communist-led uprisings that followed later in the year. Hence, while the communists may not seem to have achieved much from Phú Riềng Đỏ, it actually offered them some valuable first lessons in their anti-colonial struggle. 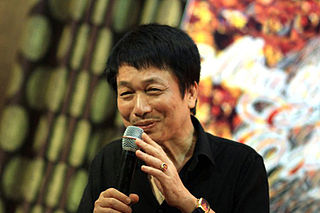 Nguyễn Phú Quang, known popularly simply as Phú Quang, is an influential Vietnamese composer, primarily known for his love songs and songs about Hanoi. He also writes symphonies, concertos, as well as film scores and soundtracks.

2nd Corps or Hương Giang Corps is one of the four regular army corps of the Vietnam People's Army. First organised in 1974 during the Vietnam War, 2nd Corps had a major role in the Ho Chi Minh Campaign that ended the war. Today the corps is stationed in Lạng Giang District, Bắc Giang. 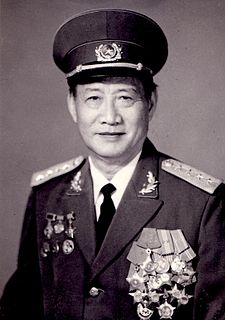 Hoàng Văn Thái, born Hoàng Văn Xiêm, was a Vietnamese Army General and a communist political figure. His hometown was Tây An, Tiền Hải District, Thái Bình Province. During the Tết Offensive, he was the highest senior North Vietnamese officer in South Vietnam. He was the first chief of staff of the Vietnam People's Army, and was responsible for key military forces in North Vietnam. He was also Chief of Staff in the Battle of Điện Biên Phủ.

Hà Huy Tập was a Vietnamese revolutionary and the third General Secretary of the Central Committee of the Communist Party of Vietnam (CPV).

Trần Đăng Ninh was a Vietnamese revolutionary and general in the North Vietnamese army. He was a former Secretary of the Northern Party Committee. Trần Đăng Ninh was the first Chairman of the Central Inspection Commission of the Communist Party of Vietnam, and the first chairman of the General Department of Supply of the People's Army of Vietnam from 1950 until his death in 1955. In 2003 he was awarded Vietnam's Gold Star Medal.

The Mobile Police Command is a unit under the Vietnam People's Public Security force that implements armed measures to protect national security, preserve social order and safety, and perform other tasks according to regulations provisions of law.