The Lý dynasty, also known as the House of Lý, was a Vietnamese dynasty that ruled Đại Việt from 1009 when Lý Công Uẩn overthrew the Early Lê dynasty and ended in 1225, when the queen Lý Chiêu Hoàng was forced to abdicate the throne in favor of her husband, Trần Cảnh. During emperor Lý Thánh Tông's reign, the official name of Vietnam became Đại Việt.

The Trần dynasty, also known as the House of Trần, was a Vietnamese dynasty that ruled over the Kingdom of Đại Việt from 1225 to 1400. The dynasty was founded when emperor Trần Thái Tông ascended to the throne after his uncle Trần Thủ Độ orchestrated the overthrow of the Lý dynasty. The final emperor of the dynasty was Thiếu Đế, who at the age of five years was forced to abdicate the throne in favor of his maternal grandfather, Hồ Quý Ly. The Trần dynasty defeated three Mongol invasions, most notably in the decisive Battle of Bạch Đằng River in 1288.

Keshav Chandra Dutt, also spelt as Keshav Datt, was an Indian field hockey player and played as a halfback. He was a part of the team that won gold medals at the 1948 and 1952 Olympics. He made 22 international appearances for India and scored two goals in his career. Keshav was the last surviving member of the Indian hockey team which participated at the 1948 London Olympic Games. He was regarded as one of the finest Indian hockey centre half-backs.

The Republic of Vietnam competed as Vietnam at the 1964 Summer Olympics in Tokyo, Japan. 16 competitors, all men, took part in 14 events in 5 sports.

The Republic of Vietnam competed as Vietnam at the 1960 Summer Olympics in Rome, Italy. Three competitors, all men, took part in five events in two sports.

The Republic of Vietnam competed as Vietnam in the 1956 Summer Olympics in Melbourne, Australia. Six competitors, all men, took part in four events in one sport. Nam quốc sơn hà is a famous 11th-century Vietnamese patriotic poem. Dubbed "Vietnam's first Declaration of Independence", it asserts the sovereignty of Vietnam's rulers over its lands. The poem was first dictated to be read aloud before and during battles to boost army morale and nationalism when Vietnam under Lý Thường Kiệt fought against the first invasion of the Song dynasty in 1075–1076, though its exact authorship is still controversial.

Thiền sư Vạn Hạnh was a Vietnamese Zen Buddhist monk. He was well known as the most important teacher, protector, and supporter of Lý Thái Tổ, the first emperor of Lý Dynasty.

Nguyễn Văn Hùng is a Vietnamese martial artist, and professional basketball player for the Thang Long Warriors of the Vietnam Basketball Association (VBA) and the Saigon Heat of the ASEAN Basketball League (ABL). He is a three-time gold medalist in Taekwondo at the Southeast Asian Games. He also represented his country at the 2008 Beijing Olympics in taekwondo. For his accomplishments in sport, his government granted him the Honourable First Class Labour Order in January 2006.

Tôn Thất Hải is a Vietnamese fencer. He competed in the individual épée event at the 1952 Summer Olympics.

Trần Văn Xuân is a Vietnamese fencer. He competed at the 1960 and 1964 Summer Olympics. 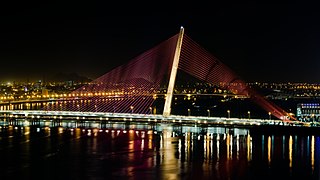 Nguyễn Văn Lý is a Vietnamese long-distance runner. He competed in the marathon at the 1964 Summer Olympics.

Trần Thanh Vân is a Vietnamese sprinter. She competed in the women's 100 metres at the 1980 Summer Olympics.