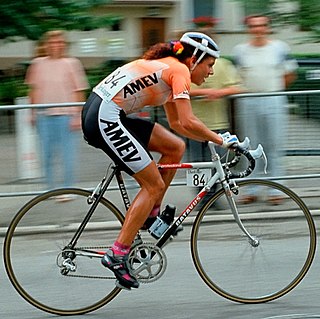 These are the results of the women's time trial event in cycling at the 2004 Summer Olympics. The race was held at 13:00 on 18 August. Zijlaard-Van Moorsel, who had crashed on the penultimate lap of the road race three days earlier, showed no serious damage had been done as she successfully defended her Olympic individual time trial title. 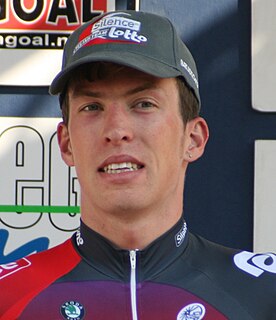 Dominique Cornu is a Belgian retired road and track cyclist from Flanders, who competed professionally between 2005 and 2015. He specialised in the time trial discipline.

The Netherlands competed at the 1932 Summer Olympics in Los Angeles, United States. 45 competitors, 31 men and 14 women, took part in 29 events in 9 sports.

The Union of South Africa competed at the 1920 Summer Olympics in Antwerp, Belgium. 39 competitors, 38 men and 1 woman, took part in 34 events in 7 sports.

The Republic of Vietnam competed as Vietnam at the 1964 Summer Olympics in Tokyo, Japan. 16 competitors, all men, took part in 14 events in 5 sports.

The Republic of Vietnam competed as Vietnam in the 1956 Summer Olympics in Melbourne, Australia. Six competitors, all men, took part in four events in one sport.

Jack Bobridge is an Australian former professional racing cyclist, who rode professionally between 2010 and 2016.

Jacobus van Egmond was a Dutch track cyclist who competed at the 1932 Summer Olympics. He won a gold medal in the sprint and a silver in the 1000 m time trial; he finished fourth in the tandem, together with Bernard Leene.

Jeanne Marie Golay is an American former road bicycle racing professional from Coral Gables, Florida. She won the 1992, 1994 and 1995 United States National Road Race Championships, and the 1992 world team time-trial championship, and competed in the 1992 Barcelona Olympics and 1996 Atlanta Olympics. In 2008, in Davis California, she was inducted into the United States Bicycling Hall of Fame in the category Modern Road & Track Competitor.

Marion Clignet is a French former track cyclist. Clignet was diagnosed with epilepsy at the age of 22 and was shunned by the United States Cycling Federation, and she subsequently raced for France since 1991. She rode at three Olympic Games for France. 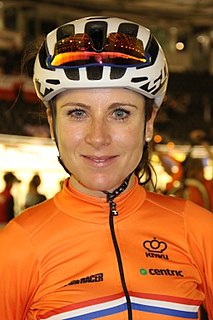 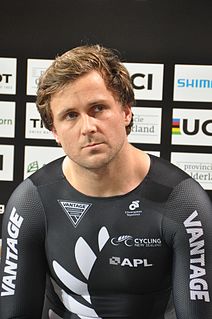 Verena Jooß is a German road and track cyclist.