Train of Shadows (Spanish : Tren de sombras) is a 1997 Spanish experimental film directed by José Luis Guerín, who also wrote and co-edited it with Manel Almiñana. The film premiered at the Mar del Plata International Film Festival on 15 November 1997.

It received the Méliès d'Or for Best European Fantastic Film. [1] 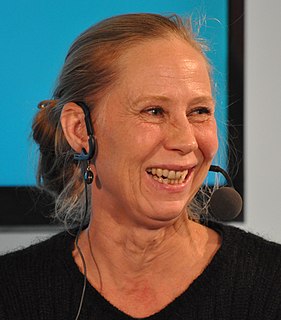 Naomi Kawase is a Japanese film director. She was also known as Naomi Sento, with her then-husband's surname. Many of her works have been documentaries, including Embracing, about her search for the father who abandoned her as a child, and Katatsumori, about the grandmother who raised her.

The Sitges Film Festival or Festival Internacional de Cine Fantástico de Cataluña is a Spanish film festival and one of the world's foremost international festivals specializing in fantasy and horror films. Established in 1968, the festival takes place every year, usually in early October, in the coastal town of Sitges, 34 kilometers West-South-West of the city of Barcelona, and is easily reachable by train. 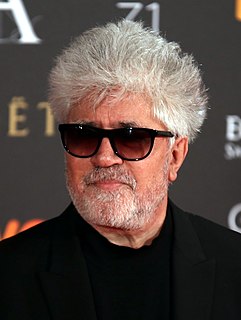 Pedro Almodóvar Caballero is a Spanish film director, screenwriter, producer, and former actor. His films are marked by melodrama, irreverent humour, bold colour, glossy décor, quotations from popular culture, and complex narratives. Desire, passion, family, and identity are among Almodóvar's most prevalent subjects in his films. He came to prominence as a director and screenwriter during La Movida Madrileña, a cultural renaissance that followed after the end of Francoist Spain.

Wayne Coles-Janess is an Australian producer, writer and director of drama and documentary film and TV programs. Based in Melbourne, Australia, he has produced documentaries about frontier places in the country. He has also made some documentaries in several international locations, including during times of war.

The Last Train is a 2002 Uruguayan and Argentine, comedy drama film, directed by Diego Arsuaga, and written by Arsuaga, Fernando León de Aranoa, and Beda Docampo Feijóo. It's also known as Corazón de fuego in Argentina. 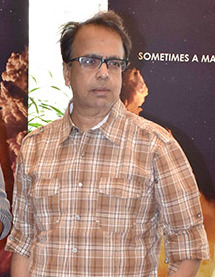 Anant Mahadevan, also credited as Ananth Narayan Mahadevan, is an Indian screenwriter, actor, and film director of Malayalam, Hindi, Marathi, Tamil films and television shows. Having been an integral part of the Indian television serials and Hindi films since the 1980s, he is also involved in the professional English and Hindi theatre.

Le Giornate del cinema muto is an annual festival of silent film held in October in Pordenone, northern Italy. It is the first, largest and most important international festival dedicated to silent film and also is present in the list of the top 50 unmissable film festivals in the world according to Variety. The Pordenone Silent Film Festival is a non-profit association, whose president is Livio Jacob. The director from 1997 until 2015 was David Robinson. In 2016, Jay Weissberg became director. Other members of the festival board are Paolo Cherchi Usai, Lorenzo Codelli, Piero Colussi, Luciano De Giusti, Carlo Montanaro, Piera Patat. 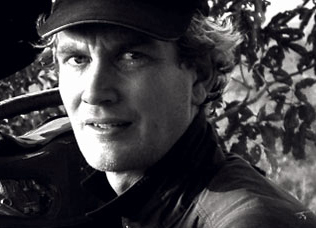 Christian Baumeister is a German cinematographer and award-winning director focusing on nature and wildlife productions.

The Méliès d'Or is an award presented annually by the Méliès International Festivals Federation (MIFF), an international network of genre film festivals from Europe. The Méliès d'Or was introduced in 1996 for science fiction, fantasy, and horror films. The award is named after film director Georges Méliès (1861-1938).

Beltenebros, also known as Prince of Shadows, is a 1991 Spanish crime-thriller mystery film co-written and directed by Pilar Miró and starring Terence Stamp, Patsy Kensit, José Luis Gómez, Geraldine James and Simón Andreu. It was entered into the 42nd Berlin International Film Festival where it won the Silver Bear for outstanding artistic contribution.

Daniel Duval was a French film actor, director and writer.

We're All Necessary is a 1956 Italian-Spanish drama film directed by José Antonio Nieves Conde, starring Alberto Closas, Folco Lulli, Lída Baarová and Ferdinand Anton. It tells the story of three men who are released from prison and have doubts and regrets regarding their place in society. The film was a co-production with an Italian company. It competed in the Spanish section at the 1956 San Sebastián International Film Festival, where it won the awards for Best Film, Best Director, Best Screenplay and Best Actor (Closas).

La Clownesse fantôme, released in the United States as The Shadow-Girl and in the United Kingdom as Twentieth Century Conjuring, is a 1902 French short silent film directed by Georges Méliès.