The Yule Lakes are a series of lakes situated on the southern slopes which drain into Yule Creek and feeds Beaver Lake east of Marble. The watershed is part of Crystal River basin which drains the northern slopes of Treasure Mountain and is the northeastern boundary of Raggeds Wilderness. [7] Yule Pass, south of Treasury Mountain separates the Raggeds Wilderness of the Sopris Ranger District from the Gunnison Ranger District and leads to the southeast along the Slate River drainage. Yule Pass is to the east of the headwaters of Yule Creek.

The Colorado Yule marble (a.k.a. Yule Colorado marble) comes from the Leadville Limestone of Mississippian age quarried near the mountain. [8] [9] [10] It was formed by contact metamorphism in the Tertiary period following the intrusion and uplift of nearby granitic Treasure Mountain dome. [8] [11] [12]

Yule marble was used in the building of the Lincoln Memorial. The Yule marble quarry is at an elevation of 9,300 ft (2,800 m) on the west side of Treasure Mountain along Yule Creek. [8] The quality and durability of the Yule marble was questioned prior to the building of the Lincoln Memorial as was the recently opened quarry's ability to provide the quantity and size required for construction. [8]

The original name of the peak was Citadel Mountain. The current name came from an ill-fated French mining expedition described in folklore documented in the 1930s and 1940s. [13] [14]

The folklore states that the expedition was organized in the late 1700s by Napoleon Bonaparte, who needed financing to fund his ambitions. [15] [16] The expedition was reported to have consisted of 300 men and 450 horses. They left New Orleans and traveled through Leavenworth, Kansas en route to the Rocky Mountains. The folklore claims that a large amount of gold was discovered and amassed by the expedition near Wolf Creek Pass. The local Native Americans were reportedly initially friendly, but relations deteriorated. In the folklore, the French buried the gold and escaped from the area, pursued and hunted by warriors. One survivor, by the name of Le Blanc, made it back to Kansas. He was the expedition's historian and was reported to have made two maps of the hidden treasure. [13] [14]

A later expedition failed to find the treasure. [13] [14] William Yule, many years later, claimed to possess a copy of the original map and explored the area south and west of the mountain. [17] The mountain was named after the legend of the missing treasure. [13] 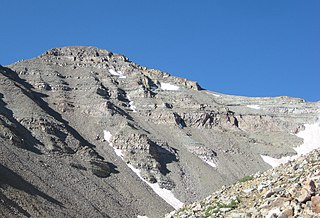 Yule Marble is a marble of metamorphosed Leadville Limestone found only in the Yule Creek Valley, in the West Elk Mountains of Colorado, 2.8 miles (4.5 km) southeast of the town of Marble, Colorado. First discovered in 1873, it is quarried underground at an elevation of 9,300 feet (2,800 m) above sea level—in contrast to most marble, which is quarried from an open pit and at much lower elevations. 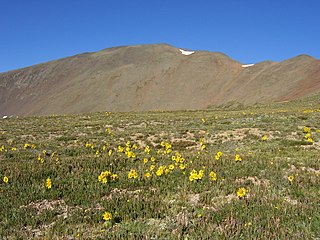 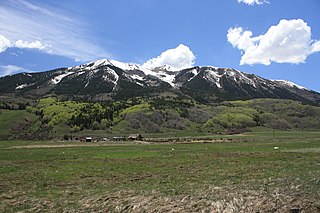 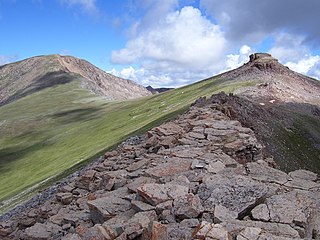 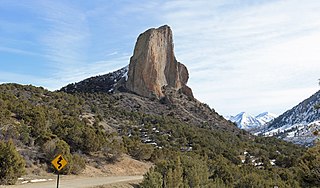 Chair Mountain is a prominent mountain summit in the Elk Mountains range of the Rocky Mountains of North America. The 12,727-foot (3,879 m) peak is located in the Raggeds Wilderness of Gunnison National Forest, 5.0 miles (8.1 km) west by south of the Town of Marble in Gunnison County, Colorado, United States. 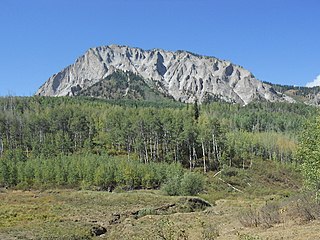 Marcellina Mountain is a prominent mountain summit in the West Elk Mountains range of the Rocky Mountains of North America. The 11,353-foot (3,460 m) peak is located in the Raggeds Wilderness of Gunnison National Forest, 15.0 miles (24.1 km) west by north of the Town of Crested Butte in Gunnison County, Colorado, United States. 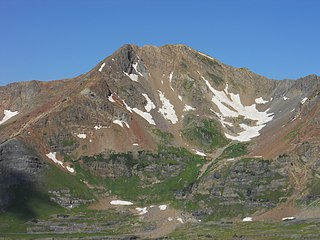 Mount Owen is the highest summit of the Ruby Range of the Rocky Mountains of North America. The 13,070-foot (3,984 m) thirteener is located in Gunnison National Forest at the edge of the Raggeds Wilderness, 8.5 miles (13.6 km) west-northwest of the Town of Crested Butte in Gunnison County, Colorado, United States.

Baldy Cinco, elevation 13,379 feet, is a mountain in Hinsdale and Mineral counties in southern Colorado. The mountain, a thirteener, is located on the Continental Divide in the San Juan Mountains. Different areas of the slopes of Baldy Cinco lie in the Rio Grande National Forest, the La Garita Wilderness, and the Gunnison National Forest. The mountain is located just north of Snow Mesa and east northeast of Spring Creek Pass. 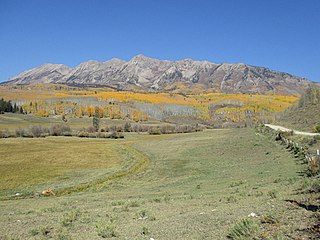