Last updated June 11, 2021
1913 treaty between Bulgaria and the Ottoman Empire

In the First Balkan War, the coalition of Bulgaria, Serbia, Greece and Montenegro defeated the Ottoman Empire. The Ottomans lost nearly all their European possessions, save for a small territory around the Sea of Marmara by the Treaty of London. [2] The Ottomans however were able to recover Eastern Thrace during the Second Balkan War. [3] Although peace talks between Bulgaria and her other neighbours were held in Bucharest, the Ottoman Empire was not represented there and conducted separate negotiations which led to the Treaty of Constantinople.

Under the terms of the abortive Treaty of Sèvres, Turkey was to cede almost all of Eastern Thrace to Greece, but the proposed territorial changes were negated by Turkey's victory over Greece in the War of Independence and the subsequent Treaty of Lausanne, which reaffirmed the borders established by the Constantinople agreement and the Bulgarian-Ottoman convention. 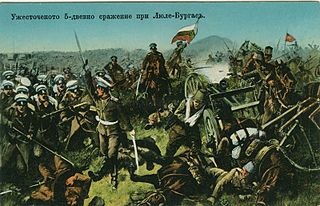 The Balkan Wars consisted of two conflicts that took place in the Balkan Peninsula in 1912 and 1913. Four Balkan states defeated the Ottoman Empire in the First Balkan War. In the Second Balkan War, Bulgaria fought against all four original combatants of the first war along with facing a surprise attack from Romania from the north. The Ottoman Empire lost the bulk of its territory in Europe. Austria-Hungary, although not a combatant, became relatively weaker as a much enlarged Serbia pushed for union of the South Slavic peoples. The war set the stage for the Balkan crisis of 1914 and thus served as a "prelude to the First World War". 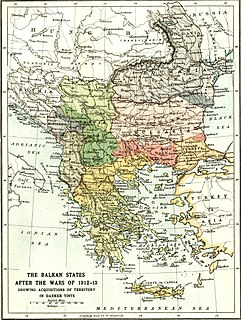 The League of Balkans was a quadruple alliance formed by a series of bilateral treaties concluded in 1912 between the Eastern Orthodox kingdoms of Greece, Bulgaria, Serbia and Montenegro, and directed against the Ottoman Empire, which at the time still controlled much of Southeastern Europe. 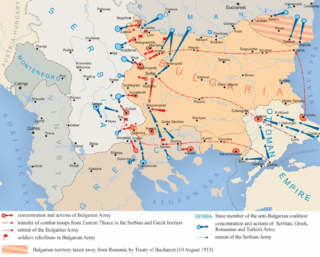 The Second Balkan War was a conflict which broke out when Bulgaria, dissatisfied with its share of the spoils of the First Balkan War, attacked its former allies, Serbia and Greece, on 16 (O.S.) / 29 (N.S.) June 1913. Serbian and Greek armies repulsed the Bulgarian offensive and counter-attacked, entering Bulgaria. With Bulgaria also having previously engaged in territorial disputes with Romania and the bulk of Bulgarian forces engaged in the south, the prospect of an easy victory incited Romanian intervention against Bulgaria. The Ottoman Empire also took advantage of the situation to regain some lost territories from the previous war. When Romanian troops approached the capital Sofia, Bulgaria asked for an armistice, resulting in the Treaty of Bucharest, in which Bulgaria had to cede portions of its First Balkan War gains to Serbia, Greece and Romania. In the Treaty of Constantinople, it lost Edirne to the Ottomans.

The Megali Idea was an irredentist concept that expressed the goal of reviving the Byzantine Empire, by establishing a Greek state, which would include the large Greek populations that were still under Ottoman rule after the end of the Greek War of Independence (1821–1828) and all the regions that traditionally belonged to Greeks since ancient times. 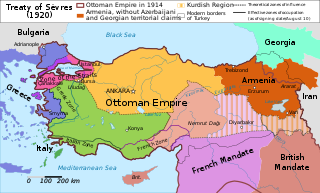 The Treaty of Sèvres was a 1920 treaty signed between the Allies of World War I and the Ottoman Empire. The treaty ceded large parts of Ottoman territory to France, the United Kingdom, Greece, and Italy, as well as creating large occupation zones within the Ottoman Empire. It was one of a series of treaties that the Central Powers signed with the Allied Powers after their defeat in World War I. Hostilities had already ended with the Armistice of Mudros. 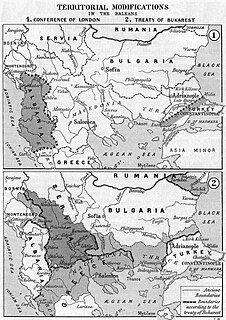 The Treaty of London (1913) was signed on 30 May following the London Conference of 1912–1913. It dealt with the territorial adjustments arising out of the conclusion of the First Balkan War. The London Conference had ended on 23 January 1913, when the 1913 Ottoman coup d'état took place and Ottoman Grand Vizier Kâmil Pasha was forced to resign. Coup leader Enver Pasha withdrew the Ottoman Empire from the Conference, and the Treaty of London was signed without the presence of the Ottoman delegation. 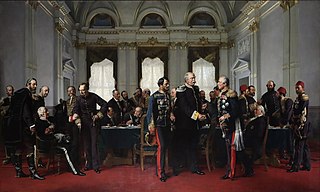 The Congress of Berlin was a meeting of the representatives of the era's six great powers in Europe, the Ottoman Empire and four Balkan states. It aimed at determining the territories of the states in the Balkan Peninsula after the Russo-Turkish War of 1877–78 and came to an end with the signing of the Treaty of Berlin, which replaced the preliminary Treaty of San Stefano, which had been signed three months earlier between Russia and the Ottoman Empire.

The Treaty of Neuilly-sur-Seine required Bulgaria to cede various territories, after Bulgaria had been one of the Central Powers defeated in World War I. The treaty was signed on 27 November 1919 at Neuilly-sur-Seine, France.

The Treaty of Bucharest was concluded on 10 August 1913, by the delegates of Bulgaria, Romania, Serbia, Montenegro and Greece. The Treaty was concluded in the aftermath of the Second Balkan War and amended the previous Treaty of London, which ended the First Balkan War. About one month later, the Bulgarians signed a separate border treaty with the Ottomans, who had regained some territory west of the Enos-Midia Line during the second war. 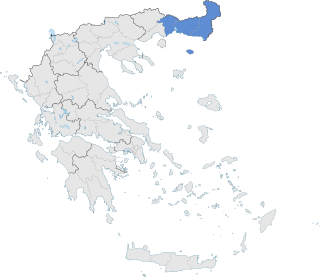 The dissolution of the Ottoman Empire (1908–1922) began with the Second Constitutional Era with the Young Turk Revolution. It restored the Ottoman constitution of 1876 and brought in multi-party politics with a two stage electoral system under the Ottoman parliament. The constitution offered hope by freeing the empire's citizens to modernize the state's institutions and dissolve inter-communal tensions. 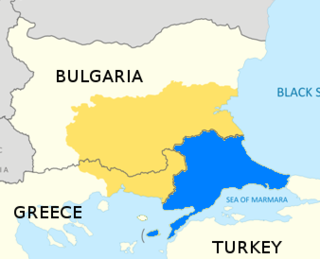 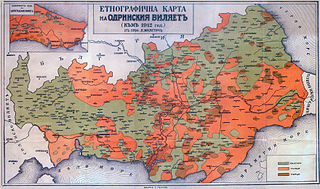 The Destruction of the Thracian Bulgarians in 1913 is a book published by the Bulgarian academic Lyubomir Miletich in 1918, which describes the mass extermination and ethnic cleansing of the Bulgarian population in Eastern Thrace and Eastern Rhodope Mountains during the Second Balkan War and in a short period after it. 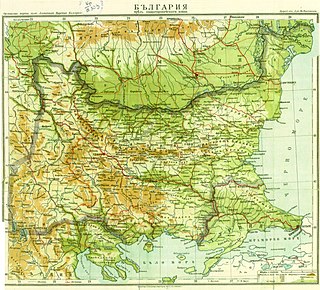 The Treaty of Athens between the Ottoman Empire and the Kingdom of Greece, signed on 14 November 1913, formally ended hostilities between them after the two Balkan Wars and ceded Macedonia—including the major city of Thessaloniki— most of Epirus, and many Aegean islands to Greece. 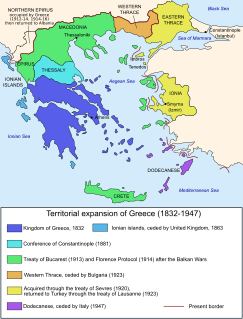 The borders of Greece from the Protocol of London from March 22, 1829 until the accession of the Dodecanese were changed nine times and its territorial extensions were seven.