Last updated September 28, 2020
Treaty between Muhammad, representing the state of Medina, and the Quraish tribe of Mecca

The Treaty of Hudaybiyyah (Arabic : صَلَح ٱلْحُدَيْبِيَّة‎, romanized: Ṣalaḥ Al-Ḥudaybiyyah) was an event that took place during the time of the Islamic prophet Muhammad. It was a pivotal treaty between Muhammad, representing the state of Medina, and the Qurayshi tribe of Mecca in January 628 (corresponding to Dhu al-Qi'dah, AH 6). It helped to decrease tension between the two cities, affirmed peace for a period of 9 years, 9 months and 9 days, and authorised Muhammad's followers to return the following year in a peaceful pilgrimage, later known as The First Pilgrimage. [1] [2] [3]

See also: Pledge of the Tree

Muhammad had a premonition that he entered Mecca and did tawaf around the Ka'bah. His companions in Madinah were delighted when he told them about it. They all revered Mecca and the Kaaba and they learned to do tawaf there. In 628, Muhammad and a group of 1,400 Muslims marched peacefully without arms towards Mecca, in an attempt to perform the Umrah (pilgrimage). They were dressed as pilgrims, and brought sacrificial animals, hoping that the Quraish would honour the Arabian custom of allowing pilgrims to enter the city. The Muslims had left Medina in a state of ihram , a premeditated spiritual and physical state which restricted their freedom of action and prohibited fighting. This, along with the paucity of arms carried, indicated that the pilgrimage was always intended to be peaceful. [4]

Muhammad and his followers camped outside of Mecca, and Muhammad met with Meccan emissaries who wished to prevent the pilgrims' entry into Mecca. After negotiations, the two parties decided to resolve the matter through diplomacy rather than warfare, and a treaty was drawn up. [5]

Conditional Points of the Treaty

Having a long discussion Both Parties agreed with some conditional points, they are like-

After the treaty was signed, most of the pilgrims objected to Muhammad giving in on most points to the Quraysh, use the name of Allah and call himself the Messenger of God. That led to Umar questioning about Muhammad's resolve. [7] [8] [9] [10] [11] [12] [13] after that he used to regret that he used to talk to the Prophet in the manner that he had never use to talk before. [11] This has even been recorded in Sahih Muslim. [14] [ original research? ]

The Treaty of Hudaybiyyah was very important in Islam. After the signing of the treaty, the Quraysh of Mecca no longer considered Muhammad to be a rebel or a fugitive from Mecca. They also recognised the Islamic state in Medina by signing the treaty. The treaty also allowed the Muslims who were still in Mecca to practise Islam publicly. Further, as there was no longer a constant struggle between the Muslims and the polytheists, many people saw Islam in a new light, which led to many more people accepting Islam. In addition, the Treaty of Hudaybiyyah paved the way for many other tribes to make treaties with the Muslims. The treaty also serves as an example that Islam was not merely spread with the sword, as Muhammad had an army that could have attacked Mecca, but Muhammad chose to make a treaty instead of attacking. [15]

A verse of the Quran was revealed about the treaty, which means, "Verily we have granted thee a manifest victory" (Quran 48:1). 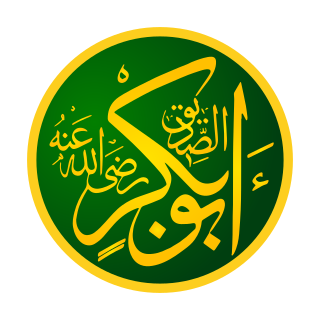 Abu Bakr Abdullah ibn Uthman was a companion and, through his daughter Aisha, a father-in-law of the Islamic prophet Muhammad, as well as the first of the Rashidun Caliphs. 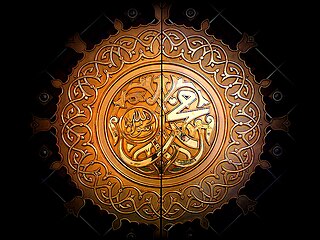 Muhammad was an Arab religious, social, and political leader and the founder of Islam. According to Islamic doctrine, he was a prophet, sent to preach and confirm the monotheistic teachings of Adam, Abraham, Moses, Jesus, and other prophets. He is viewed as the final prophet of God in all the main branches of Islam, though some modern denominations diverge from this belief. Muhammad united Arabia into a single Muslim polity, with the Quran as well as his teachings and practices forming the basis of Islamic religious belief. 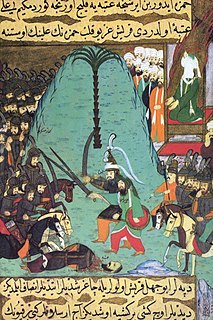 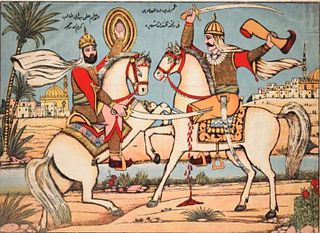 The Battle of the Trench, also known as the Battle of Khandaq and the Battle of the Confederates, was a 27-day-long defence by Muslims of Yathrib from Arab and Jewish tribes. The strength of the confederate armies is estimated around 10,000 men with six hundred horses and some camels, while the Medinan defenders numbered 3,000.

The military career of Muhammad, the final prophet of Islam, encompasses several expeditions and battles throughout the Hejaz region in the western Arabian Peninsula which took place in the final ten years of his life, from 622 to 632. His primary campaign was against his own tribe in Mecca, the Quraysh. Muhammad proclaimed prophethood around 610 and later migrated to Medina after being persecuted by the Quraysh in 622. After several battles against the Quraysh, Muhammad conquered Mecca in 629, ending his campaign against the tribe. 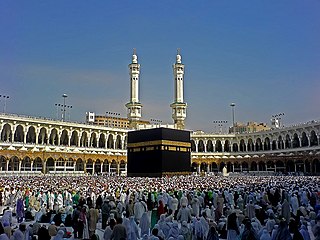 The ʿUmrah is an Islamic pilgrimage to Mecca that can be undertaken at any time of the year, in contrast to the Ḥajj, which has specific dates according to the Islamic lunar calendar.

Usama ibn Zayd was an early Muslim and companion of the Prophet Muhammad.

Safwan ibn Umayyah was a sahaba (companion) of the Islamic prophet Muhammad.

The conquest of Mecca was the conquering of the town of Mecca by Muslims led by Muhammad in December 629 or January 630 AD (Julian), 10–20 Ramadan, 8 AH. The conquest marked the end of the wars between the followers of Muhammad and the Quraysh tribe.

Suhayl ibn 'Amr, also known as Abu Yazid, was a contemporary of the Islamic prophet Muhammad, and a prominent leader among the Quraysh of Mecca. Clever and articulate, he was known as the Khatib or orator of the tribe, and his opinion carried great weight among them.

Muḥammad ibn ʿAbdullāh ibn ʿAbdul-Muṭṭalib ibn Hāshim, commonly known as Muhammad, is the seal of the Messengers and Prophets of God in all the main branches of Islam. Muslims believe that the Quran, the central religious text of Islam, was revealed to Muhammad by God, and that Muhammad was sent to restore Islam,. The religious, social, and political tenets that Muhammad established with the Quran became the foundation of Islam and the Muslim world.

The Islamic prophet Muhammad came to Medina following the migration of his followers in what is known as the Hijra in 622. He had been invited to Medina by city leaders to adjudicate disputes between clans from which the city suffered. He left Medina to return to and conquer Mecca in December 629.

Muhammad was born and lived in Mecca for the first 52 years of his life time until his hijra. This period of his life is characterized by his early career as a shepherd and merchant, his proclamation of prophethood, and his marriage to Khadija bint Khuwaylid, even though he would also marry Sawda bint Zam'aa after her death.

Muhammad led the Conquest of Mecca in Ramadan of the Islamic year 8 AH. The Quraysh in Mecca was Muhammad's final major rival in the Arabian Peninsula, and following the conquest, Muhammad focused his military operations on further expansion of his Islamic realm to the north, with a campaign against the Ghassanids and the Byzantine Empire.

The first pilgrimage or Umrah of Dhu'l-Qada was the first pilgrimage that Prophet Muhammad and the Muslims made after the Migration to Medina. It took place on the morning of the fourth day of Dhu al-Qi'dah 7 AH, after the Treaty of Hudaybiyyah 6 AH. The entire event was three days long.

The diplomatic career of Muhammad, the final prophet of Islam, encompasses his leadership over the growing Muslim community (Ummah) in early Arabia and his correspondences with the rulers of other nations in and around Arabia. This period was marked by the change from the customs of the period of Jahiliyyah in pre-Islamic Arabia to an early Islamic system of governance, while also setting the defining principles of Islamic jurisprudence in accordance with Sharia law and an Islamic theocracy. 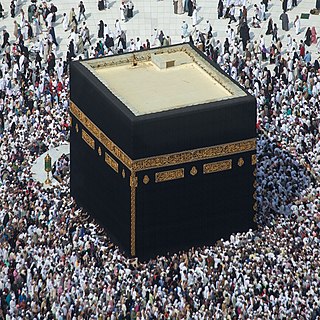 The Kaaba, also spelled Ka'bah or Kabah, sometimes referred to as al-Kaʿbah al-Musharrafah, is a building at the center of Islam's most important mosque, the Masjid al-Haram in Mecca, Saudi Arabia. It is the most sacred site in Islam. It is considered by Muslims to be the Bayt Allah and is the qibla for Muslims around the world when performing salah.

al-'As ibn Suhayl, known as Abu Jandal was a Sahabi of the Prophet Muhammad who was the first person returned to Mecca after the Treaty of Hudaybiyyah. He is also the brother of Abdullah ibn Suhayl and son of Suhayl Ibn Amr, the orator of Quraysh.

In April 623, the Islamic Prophet Muhammad sent Ubaydah ibn al-Harith with a party of sixty armed Muhajirun to the valley of Rabigh, in modern-day Saudi Arabia. They expected to intercept a Quraysh caravan that was returning from Syria under the protection of Abu Sufyan ibn Harb and 200 armed riders. The Muslim party travelled as far as the wells at Thanyat al-Murra, where Sa`d ibn Abi Waqqas shot an arrow at the Quraysh. This is known as the first arrow of Islam. Despite this surprise attack, "they did not unsheathe a sword or approach one another," and the Muslims returned empty-handed; however, two Meccans traders left their caravan, became Muslim, and went with the expedition back to Medina.