Last updated October 12, 2020
Diagram used in various mystical traditions
This page refers to the concept of an archetypal tree of life in Jewish Kabbalah, Christian Cabbala and Hermetic Qabalah. See also Tree of life (disambiguation) for other meanings of the term.

The tree of life is a diagram used in various mystical traditions. [1] It usually consists of 10 nodes symbolizing different archetypes and 22 lines connecting the nodes. [2] The nodes are often arranged into three columns to represent that they belong to a common category. [2]

The nodes are usually represented as spheres and the lines are usually represented as paths. [2] The nodes usually represent encompassing aspects of existence, God, or the human psyche. [2] [3] [4] The lines usually represent the relationship between the concepts ascribed to the spheres or a symbolic description of the requirements to go from one sphere to another. [2] [4] The nodes are also associated to deities, angels, celestial bodies, values, single colors or combinations of them, and specific numbers. [3] [5] The columns are usually symbolized as pillars. [2] These pillars usually represent different kinds of values, electric charges, or types of ceremonial magic. [2] [5] It is usually referred to as the Kabbalistic tree of life in order to distinguish it from other concepts with the same name. [1] [6] In the Jewish Kabbalah, the nodes are called sephiroth. [2] The diagram is also used by Christian Cabbala, Hermetic Qabalah and Theosophy. [5] [6] [7] The diagram is believed to be derivable from the flower of life. [3]

Scholars believe that the concept of a tree of life with different spheres encompassing aspects of reality traces its origins back to Assyria in the 9th century BC. [1] [6] The Assyrians also assigned values and specific numbers to their deities similar to those used by the later Jewish Kabbalah. [1] [6] The beginnings of the Jewish Kabbalah are traced back by scholars to the Medieval Age, originating in the Book of Bahir and the Book of Zohar. [5] [6] However, the first historical instance of the modern diagram appeared centuries later in the cover of the Latin translation of Gates of Light in the year 1516. [5] Scholars have traced the origin of the art in the Porta Lucis cover to Johann Reuchlin. [8]

The first historical instance of the modern tree of life was designed by Johann Reuchlin. [8] Paolo Riccio's son, Hyeronomius, had actively exchanged letters and shared his father's work with Reuchlin before publication. [9] Thus, in the year 1516, Reuchlin's diagram came to appear on the cover of the Paolo Riccio's Latin translation of Joseph Gikatilla's Gates of Light. The diagram only had 17 paths and, at the time, the concepts of 10 spheres and 22 letters were still distinct in the literature. [10] In 1573, a version sketched by Franciscus Zillettus appeared in Cesare Evoli, De divinis attributis. [11] This version introduced several innovations that would reappear in later versions: all the spheres were of the same size, the lines became wide paths, the spheres were aligned into 3 distinct columns, Malkuth was connected to three spheres, and astrological symbols for the known celestial bodies were used in conjunction with the Hebrew names to label the spheres. However, it also had only 17 paths, albeit distributed differently. Reuchlin's version was reprinted in Johann Pistorius' compilation of 1587. Finally, several versions from unknown artists introducing 21 and 22 paths appeared in the posthumous print editions of Moses Cordovero's Pardes Rimonim between 1592 and 1609. [12] However, the diagrams with 22 paths lacked consistency with each other and none of them had the 22 letters. [13] Between 1652 and 1654, Athanasius Kircher published his own version of the tree in Oedipus Aegyptiacus. Kircher might have designed his diagram in a syncretic attempt to reconcile several distinct ideas. This heavily annotated version, self-termed Sephirotic System, introduced more innovations: abstract concepts, divine names, the 22 Hebrew letters for each path, and new astrological symbols. [14] Between 1677 and 1684, Christian Knorr von Rosenroth published Kabbala Denudat. He designed several new versions of the tree of life, introduced the first version with 11 spheres, placed Daath between Kether and Tiphareth, and attempted to derive the tree of life from elemental geometry. [15] [16] [17]

Consequently, to modern day, two versions are widely circulated: one where Malkuth has 1 path, owing to Reuchlin's original; and another where Malkuth has three paths, owing to several later versions; both having 22 paths in total, corresponding each to a Hebrew letter, owing to Kircher's syncretism. [18] With the resurgence of occultism in the 19th century, many new versions appeared, but without major innovations. [19] In the 20th century, Aleister Crowley might have resurfaced the idea of Daath as an 11th hidden sphere between Kether and Tiphareth in his book Liber 777, syncretizing the concept with Kircher's symbols and von Rosenroth's diagrams. [20] [21] With the discovery of new planets, people might have tried to introduce more astrological symbols to their own versions of the diagram. As a result, there is no general agreement about the position of Uranus, Neptune and Pluto. [22] [23] However, in particular, it has been noted that Pluto bears resemblance with Daath: Pluto is a former planet, the last traditional celestial body to be discovered, and Daath is a hidden sphere, the last to be introduced. [24] In the 21st century, enthusiasts might have rushed to attribute these collaborative works spanning centuries and involving several people through complex interactions to single authors. Thus, sometimes, the version where Malkuth has 3 paths is termed the Tree of Emanation, and the version where Malkuth has 1 path is termed the Tree of Return. [5]

According to Chassidist Kabbalist scholars, the tree of life is to be interpreted in the following way: [25]

Theurgy describes the practice of rituals, sometimes seen as magical in nature, performed with the intention of invoking the action or evoking the presence of one or more deities, especially with the goal of achieving henosis and perfecting oneself.

Johann Reuchlin was a German-born Catholic humanist and a scholar of Greek and Hebrew, whose work also took him to modern-day Austria, Switzerland, and Italy and France. Most of Reuchlin's career centered on advancing German knowledge of Greek and Hebrew.

777 and Other Qabalistic Writings of Aleister Crowley is a collection of papers written by Aleister Crowley. It was edited and introduced by Dr. Israel Regardie, and is a reference book based on the Hermetic Qabalah.

Enochian magic is a system of ceremonial magic based on the evocation and commanding of various spirits. It is based on the 16th-century writings of John Dee and Edward Kelley, who claimed that their information, including the revealed Enochian language, was delivered to them directly by various angels. Dee's journals contained the Enochian script, and the tables of correspondences that accompany it. Dee and Kelley believed their visions gave them access to secrets contained within the Book of Enoch.

The A∴A∴ is a spiritual organization described in 1907 by occultist Aleister Crowley. Its members are dedicated to the advancement of humanity by perfection of the individual on every plane through a graded series of universal initiations. Its initiations are syncretic, unifying the essence of Theravada Buddhism with Vedantic yoga and ceremonial magic. The A∴A∴ applies what it describes as mystical and magical methods of spiritual attainment under the structure of the Qabalistic Tree of Life, and aims to research, practise, and teach "scientific illuminism". A∴A∴ stands for Argenteum Astrum, which is Latin for Silver Star. 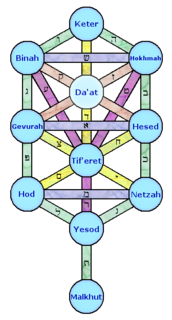 Hod is the eighth sephira of the Kabbalistic Tree of Life. 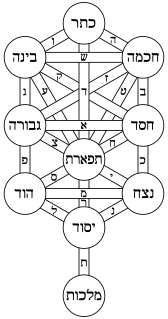 The Qliphoth/Qlippoth/Qlifot or Kelipot, literally "Peels", "Shells" or "Husks", are the representation of evil or impure spiritual forces in Jewish mysticism, the polar opposites of the holy Sefirot. The realm of evil is also termed Sitra Achra/Aḥra in Kabbalah texts. 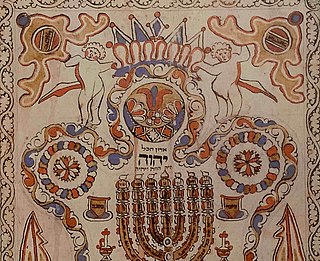 Keter also known as Kether, is the topmost of the sephirot of the Tree of Life in Kabbalah. Since its meaning is "crown", it is interpreted as both the "topmost" of the Sephirot and the "regal crown" of the Sephirot. It is between Chokhmah and Binah and it sits above Tiferet. It is usually given three paths, to Chokhmah, Tiferet and Binah.

Sefirot, meaning emanations, are the 10 attributes/emanations in Kabbalah, through which Ein Sof reveals Himself and continuously creates both the physical realm and the chain of higher metaphysical realms. The term is alternatively transliterated into English as sephirot/sephiroth, singular sefirah/sephirah etc.

Azoth was considered to be a universal medication or universal solvent, and was sought for in alchemy. Similar to another alchemical idealized substance, alkahest, azoth was the aim, goal and vision of many alchemical works. Its symbol was the Caduceus. The term, while originally a term for an occult formula sought by alchemists much like the philosopher's stone, became a poetic word for the element mercury. The name is Medieval Latin, an alteration of azoc, being originally derived from the Arabic al-zā'būq "the mercury", even if it is a common misconception of the era to link azoth as mercury alone rather than the addition of mercury, salt and sulfur when it comes to the senses and symbols.

Binah, is the third sephira on the kabbalistic Tree of Life. It sits on the level below Keter, across from Chokhmah and directly above Gevurah. It is usually given four paths: to Keter, Chokhmah, Gevurah, and Tiphereth

Tiferet alternatively Tifaret, Tifereth, Tyfereth or Tiphereth, is the sixth sefira in the kabbalistic Tree of Life. It has the common association of "Spirituality", "Balance", "Integration", "Beauty", "Miracles", and "Compassion".

Malkuth, Malchut or Malchus is the tenth of the sephirot in the Kabbalistic Tree of Life. It sits at the bottom of the Tree, below Yesod. This sephirah has as a symbol the Bride which relates to the sphere of Tipheret, symbolized by the Bridegroom.

Yesod is a sephirah or node in the kabbalistic Tree of Life, a system of Jewish philosophy. Yesod, located near the base of the Tree, is the sephirah below Hod and Netzach, and above Malkuth. It is seen as a vehicle allowing movement from one thing or condition to another. Yesod, Kabbalah, & the Tree of Life are Jewish concepts adopted by various philosophical systems including Christianity, New Age Eastern-based mysticism, and Western esoteric practices.

In Thelemic mysticism, the Abyss is the great gulf or void between the phenomenal world of manifestation and its noumenal source.

Within the modern system of Thelema, developed by occultist Aleister Crowley in the first half of the 20th century, Thelemic mysticism is a complex mystical path designed to do two interrelated things: to learn one's unique True Will and to achieve union with the All. The set of techniques for doing so falls under Crowley's term Magick, which draws upon various existing disciplines and mystical models, including Yoga, Western ceremonial ritual, the Qabalah, and several divination systems, especially the tarot and astrology.

Therion is a deity found in the mystical system of Thelema, which was established in 1904 with Aleister Crowley's writing of The Book of the Law. Therion's female counterpart is Babalon, another Thelemic deity. Therion, as a Thelemic personage, evolved from that of "The Beast" from the Book of Revelation, whom Crowley identified himself with since childhood, because his mother called him that name. Indeed, throughout his life he occasionally referred to himself as “Master Therion” or sometimes “The Beast 666”. He wrote:

Before I touched my teens, I was already aware that I was THE BEAST whose number is 666. I did not understand in the least what that implied; it was a passionately ecstatic sense of identity.