Trenton Academy was a private school in the city of Trenton, New Jersey from 1781 to 1884 that served children ages 4–16. It was located on Academy Street where the Trenton Public Library is presently located. [1]

In 1781 prominent members of the Trenton community created a company promoting the cause of education in the city. It was organized as a stock company and the board of trustees were elected annually from the stockholders. By 1785, the school was formally named Trustees of Trenton Academy. After 1789 the school issued a certificate under the seal of the corporation to scholars which studied the English language grammatically and gained competent knowledge of at least 2 branches of Extraction of the Roots, Algebra, Mathematics, Geography, Chronology, History Logic Rhetoric, Moral and Natural Philosophy, Spirit of Laws and Criticism, the students also read, what is usually read in schools: Caesars Commentaries or Ovid's Metamorphoses, Justin or Sallust in Latin and any two of the four following books, The New Testament, Lucian's Dialogue, Xenophon or Homer in Greek. [2] [3]

During the late 1790s, the Academy held a lottery to raise money. In 1800, they leased part of the Presbyterian church ground on State street for a girls' school. The Trustees of the Academy passed a resolution prohibiting the students from shooting guns within the limits of the school in the year 1807. In the winter of 1815-1816, the Academy was used by the Methodist church to hold one of the first Sunday schools in the country. The school flourished for many years as a notable institution in Trenton New Jersey. [4] Many statesmen and notable citizens attended the institution.

In 1847 a new building was erected and the trustees reduced the tuition. By 1870 the principal of the academy was George R Grosvenor. The Trustees were Thomas J Stryker, Gregory Anthony Perdicaris, Barker Gummere, Philemon Dickinson, and John S. Chambers. [5] By the year 1881, the school contained nineteen students and after 103 years around 1884, the school closed, currently the lot where the Trenton Academy once stood is now the Trenton Public Library. There is a plaque on the library describing the Trenton Academy. [6] 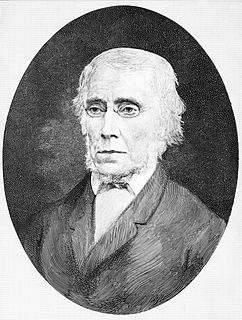 Timothy Abbott Conrad was an American geologist and malacologist.

The Perdicaris affair, also known as the Perdicaris incident, refers to the kidnapping of Greek-American Ion Hanford Perdicaris (1840–1925) and his stepson, Cromwell Varley, a British subject, by Ahmed al-Raisuni and his bandits on 18 May 1904 in Tangier, Morocco. Raisuni, leader of several hill tribes, demanded a ransom of $70,000, safe conduct, and control of two of Morocco's wealthiest districts from the Sultan of Morocco Abd al-Aziz. During lengthy negotiations, he increased his demands to control of six districts. The historical importance of the affair lay not in the kidnapping itself but in the concentration of naval power in Tangier and what it meant for the politics of gunboat diplomacy.

The Trenton Public Schools is a comprehensive community public school district, serving students in pre-kindergarten through twelfth grade from Trenton, in Mercer County, New Jersey, United States. The district is one of 31 former Abbott districts statewide that were established pursuant to the decision by the New Jersey Supreme Court in Abbott v. Burke which are now referred to as "SDA Districts" based on the requirement for the state to cover all costs for school building and renovation projects in these districts under the supervision of the New Jersey Schools Development Authority. As of the 2018–19 school year, the district, comprised of 20 schools, had an enrollment of 14,500 students and 884.4 classroom teachers, for a student–teacher ratio of 16.4:1. The district was the sixth-largest in the state in 2022.

Henry Chapman was an American politician from Pennsylvania who served as a Democratic member of the U.S. House of Representatives for Pennsylvania's 7th congressional district from 1857 to 1859.

Charles Conrad Abbott was an American archaeologist and naturalist.

William Stryker Gummere was Chief Justice of the Supreme Court of New Jersey. Gummere was captain of the Princeton football team that met Rutgers in 1869 in the first intercollegiate football game played in America.

The French Arms Tavern was a structure in Trenton, New Jersey, that served as the capitol of the United States and meeting place of the Congress of the Confederation from November 1, 1784, to December 24, 1784. The building was located at the southwest corner of King and Second Streets from 1730 until 1837 when it was torn down.

James Sproat Green was an American lawyer who served as U.S. Attorney for the District of New Jersey from 1835 to 1850. He was the father of New Jersey Governor Robert Stockton Green.

Frederick Beasley Ogden was an American attorney, jurist, and politician who served as the eighth Mayor of Hoboken, New Jersey from 1865 to 1867.

Elias Bailey Dayton Ogden was an American attorney and jurist who served three terms as an associate justice of the New Jersey Supreme Court from 1848 until his death in 1865.

William Mindred Johnson was a U.S. attorney, philanthropist, and politician. He was the son of Whitfield S. Johnson, who served as New Jersey Secretary of State from 1861 to 1866. 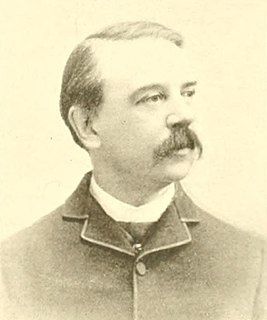 William Lewis Dayton Jr. was an American lawyer, judge and diplomat who served as U.S. Minister to the Netherlands. He was the son of William L. Dayton.

Taylor Provisions is a leading producer of pork roll, based in Trenton, New Jersey. Its founder, John Taylor, is credited as the inventor of the pork roll, originally calling it "Taylor's Prepared Ham". While "Taylor" is a brand of pork roll, in regions of North Jersey all brands of pork roll may be referred to colloquially as "Taylor Ham" due to the first production of pork roll being branded Taylor.

Harvey Fisk was an American investment banker who founded Fisk & Hatch along with Alfrederick Smith Hatch.

Herbert Swift Carter was an American physician and writer.

Gregory Anthony Perdicaris was a Greek American statesman, lawyer, professor, author, and entrepreneur. Perdicaris raised awareness about Greece in the United States during the Greek War of Independence and was in Greece during the critical early years. He was the first Consul of the United States for Greece. He is known for incorporating dozens of companies in the United States. Perdicaris and partners built the municipal framework for gas and electric companies. He was associated with Dewing v. Perdicaries, 96 U.S. 193 (1877), the major Supreme Court case dealing with Confederate Sequestration. He was a prominent resident of Trenton, New Jersey.

William Hartwell Blackwell was an American fruit farmer and politician from New Jersey.