Trevor Thoms [1] (30 October 1950 – 8 December 2010), [2] known as Judge Trev Thoms and Judge Trev, was a British guitarist, best known for being a member of Inner City Unit, Atomgods and The Steve Gibbons Band.

In the late 1960s and early 1970s, he played in a blues-rock group with hints of progressive rock and heavy rock called Iron Maiden - not the famous group of the same name - along with Barry Skeels, [3] who later played for Zior [4] [5] and eventually became a tour manager for acts such as Black Sabbath, Saxon, Manowar, and Yngwie Malmsteen [6] (another member of the band was called Steve Drewett, but probably he is not the same person as the one who later founded The Newtown Neurotics). [7] [8] [9] They recorded one album called Maiden Voyage. [10] [11]

He later played in the seminal British Blues Boom band, Spirit of John Morgan. [12] He has backed such luminaries as Graham Bond, Gregory Isaacs, Steve Gibbons and was a member of Steve Peregrin Took's band Steve Took's Horns with Dino Ferari on drums. [13]

After The Horns broke up in the late 1970s both Thoms and Ferari joined ex-Hawkwind's Nik Turner in Inner City Unit. Thoms also worked with Turner and Twink under the hybrid Pink Fairies/Hawkwind name Pink Wind. He later formed Atomgods and has worked with other ex-Hawkwind members including Ron Tree. [14] He and Ferari formed their own version of Inner City Unit called Judge Trev's Inner City Unit. A regular 'collaborator' he also played with the revived Pinkwind featuring Nik Turner & Twink (ex Pink Fairies) and after moving to Brighton regularly appeared with Slim Tim Slide (Tim Rundall) sometimes under the pseudonym "Stinky & Stumpy", a partnership that continued sporadically for the rest of Thoms' life.

He played festivals such as the Big Green Gathering, Cosmic Puffin Festival, [15] Glastonbury, [16] Earthwise etc., performing his solo acoustic set or with the reformed Inner City Unit with Nik Turner. He also played gigs as Trev and Kev with Kev Ellis, singer from Bubbledubble.

During the last years of Trevs life he was active in forming The Real Music Club in Brighton and indeed his last ever gig was at a RMC event to celebrate his birthday, and his last recordings were with fellow RMC members Paradise 9. With the aim of promoting local talent as well as providing an outlet for his own work the club continues both live and on Brighton and Hove Community radio www.bhcr.org.uk and annual Trev Memorial gigs are ongoing.

Steve Peregrin Took was a British musician and songwriter. He is best known for his membership of the duo Tyrannosaurus Rex with Marc Bolan. After breaking with Bolan, he concentrated on his own singer-songwriting activities, variously as a solo artist or as a frontman for several bands.

Dino Ferari is an Italian drummer who has worked with a number of British bands. He played with former Tyrannosaurus Rex percussionist Steve Peregrin Took's band Steve Took's Horns alongside Trev Thoms on guitar. After The Horns both Thoms and Ferari joined former Hawkwind saxophonist Nik Turner in Inner City Unit.

Ronald 'Ron' Tree is an English musician and song writer, best known as frontman and bassist for the English space rock band Hawkwind from 1995 to 2002. He also played both these roles in the reunited Steve Took's Horns in 2002, taking the place of Steve Peregrin Took. He is currently vocalist/songwriter in the "Hawklords" alongside Jerry Richards, Harvey Bainbridge, Dave Pearce and Tom Ashurst. 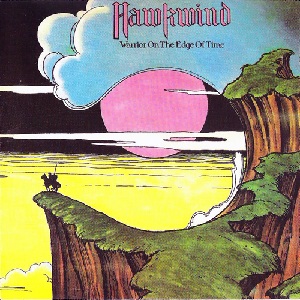 Warrior on the Edge of Time is Hawkwind's fifth studio album. It reached number 13 on the U.K. album charts and was their third and last album to make the U.S. Billboard chart, where it peaked at number 150. Many of the lyrics are by Michael Moorcock and the album is loosely based on the concept of Moorcock's novel The Eternal Champion. Reviews have been mixed, with Melody Maker panning the album and particularly criticizing the vocal work while the All Music Guide has praised the album for features such as the songwriting.

Clifford Leon Anderson, known professionally as Andy Anderson, was an English drummer, best known for his work with The Cure and Steve Hillage.

Steve Took's Horns was an English rock band with blues rock and punk influences formed in 1977 by former Tyrannosaurus Rex percussionist turned solo artist Steve Peregrin Took together with Trev Thoms, later of Nik Turner's Inner City Unit. The band was the first in which Thoms worked with his future Inner City Unit bandmate Ermanno Ghisio Erba aka Dino Ferari, in what would be a long string of collaborations until Thoms' death in 2010. A 2004 posthumous album of the band was reviewed in Classic Rock magazine, a 1978 live performance was reviewed in Melody Maker, the band's 1977 recording session was described at length in a Forced Exposure interview with eyewitness Larry Wallis and the band was euologised in a Record Collector article about Took written by Luke Haines. 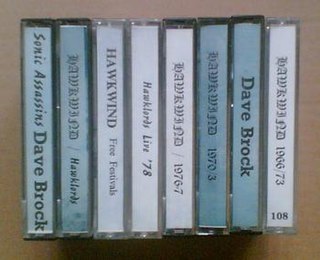 The Weird Tapes are a set of music tapes by the English rock group Hawkwind. Issued in the early 1980s, they contain live, radio sessions, out-take and demo performances.

This is Hawkwind, Do Not Panic is a 1984 live album by the English space rock group Hawkwind. The album consisted of two discs: an LP which was recorded during the group's 1980 Levitation tour; and a 12" EP recorded at their June 1984 appearance at the Stonehenge Free Festival.

Thomas Crimble is a musician who played with Skin Alley and Hawkwind before becoming a central part of the organisation of the Glastonbury Festival from the 1971 free festival until 1999. He subsequently became involved in Nik Turner's alternative Hawkwind project Space Ritual. 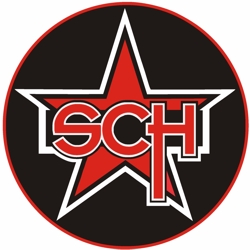 Krankschaft are an English rock band.

Hawklords is a British space rock band. The band started as a one-off ensemble of musicians formerly associated with Hawkwind, and playing Hawkwind covers. Although the band uses the same name as the short-lived 1978 incarnation of Hawkwind, it is not a reunion, nor a tribute band. Only one of the band's current members was in the 1978 Hawklords.

Steve Clarke was born in London, England on 20 November 1959. He is a former member of Quasar and Fastway.