The Tribes of Galway (Irish : Treibheanna na Gaillimhe) were 14 merchant families who dominated the political, commercial and social life of the city of Galway in western Ireland between the mid-13th and late 19th centuries. They were the families of Athy, Blake, Bodkin, Browne, Darcy, Deane, Font, French, Joyce, Kirwan, Lynch, Martyn, Morris and Skerritt. Of the 14 families, 12 were of Anglo Norman origin, while two — the Darcy (Ó Dorchaidhe) and Kirwan (Ó Ciardhubháin) families — were Normanised Irish Gaels.

The Tribes were merchant families who prospered from trade with continental Europe. They dominated Galway's municipal government during the medieval and early modern eras.

The Tribes distinguished themselves from the Gaelic peoples who lived in the hinterland of the city. Many of these families spoke Irish as a second or even first language. However, the feared suppression of their common faith joined both groups together as Irish Catholics after the Irish Rebellion of 1641. During the Irish Confederate Wars (1641–1653), Galway took the side of the Confederate Catholics. Following the Cromwellian conquest of Ireland, the English government punished the Tribes. Galway was besieged and after it surrendered in April 1652, the Tribes had to face the confiscation of their property by the New Model Army.

The Tribes lost much of their power within Galway city after English Parliamentarians took over the Galway Corporation in 1654. Cromwell's forces referred to them by the derogatory name, "The Tribes of Galway", which the families later adopted as a mark of defiance. [1]

Galway's urban elite gained a restoration of some of their power during the reign of the King Charles II (1660–1685) and his successor James II. However, Jacobite defeat in the War of the Two Kings (1689–91), marked the end of the Tribes' once overwhelming political influence on the life of the city. Power passed to the small Protestant population. Garrison members of the Tribes who owned land in Galway and Mayo were protected by the advantageous surrender provisions that were signed on 22 July 1691.

Like all Irish counties Galway has a nickname. The nickname the tribesmen is now used for the county and its people and is derived from this term.

The tribes also lend their names to 14 of the city's roundabouts located in or around the city's boundaries. The roundabouts are signposted on navy blue signs containing the tribe's name in the Irish language. 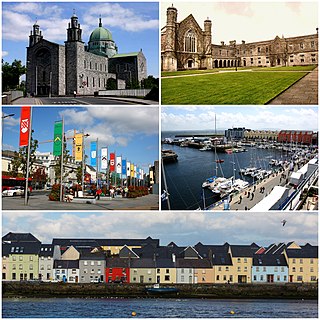 Galway is a city in the West of Ireland, in the province of Connacht. It is the county town of County Galway, which is named after the county. It lies on the River Corrib between Lough Corrib and Galway Bay, and is the sixth most populous city on the island of Ireland and the fourth most populous in the Republic of Ireland, with a population at the 2022 census of 83,456.

Richard Óge Martyn was a Galway lawyer and member of the Catholic Confederates of Ireland. He was of the senior line of the Martyn family, one of the Tribes of Galway. He lived at Dunguaire Castle, Kinvarra. He worked with his brother-in-law and first cousin, Patrick Darcy, against the Plantation of Connaught in the 1630s, and served on the Supreme Council of the Confederate Catholics in the 1640s. Martyn also served as Mayor of Galway, 1642–1643. He and Darcy were part of a network of Catholic lawyers in Galway who contrived to continue in practice in defiance of the Penal Laws, which barred Catholics from the professions. Richard was admitted to the King's Inns in 1631: he was suspended from practice at the Irish Bar in 1635 as a known Catholic, but permitted to resume practice in 1637, apparently because he had sworn the Oath of Supremacy.

Patrick Darcy (1598–1668) was an Irish Catholic Confederate and lawyer who wrote the constitution of Confederate Ireland.

Sir John Kirwan (1650-1721) was an Irish entrepreneur who founded the Kirwans of Castle Hackett, County Galway.

Thomas Bodkin, fl. 1506–1507, was the first member of the Bodkin family to be elected Mayor of Galway. The Bodkins were one of The Tribes of Galway, and a sept of the FitzGerald family. He would be succeeded in office by John Bodkin fitz Richard, Richard Bodkin (1610–1611), and John Bodkin fitz Dominick (1639–1640).

Seoirse Brún, was an Irish scribe, fl. 1876. Brún, a native of Creggduff, Annaghdown, County Galway, is known only from a manuscript called RBÉ F006. It contains the following note:

George Browne Cregg Duff This Book/Belongs to him For Certain No Other Person/in This Locality can claim on This/Book but him Alone When he is Dead/and his bones are rotten This Little Book/Will tell his Name when he is quite/Forgotten Given under My ha[n]d this 18th Day of Oct 1876 - George Browne/Cregg Duff Annadown/County of Galway Ireland, The European Iliad.

William Ó Ciardhubháin, fl. 1488, was an Irish merchant and the founder of one of the Tribes of Galway.

Geoffrey Browne was an Irish lawyer and politician.