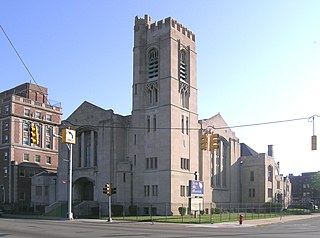 The New Mt. Moriah Baptist Church is located at 13100 Woodward Avenue in Highland Park, Michigan in Metro Detroit. It was built in 1922 as the Trinity United Methodist Church, in the Gothic Revival style. It was listed on the National Register of Historic Places in 1982.

Bellevue means "beautiful view" in French. It may refer to:

Sunnyside and Sunny Side may refer to:

Oak Grove may refer to:

Loretto may refer to:

First Baptist Church may refer to:

Trinity Episcopal Church may refer to various buildings and their congregations in the United States:

Grace Episcopal Church, or variants thereof, may refer to the following:

Trinity Methodist Church may refer to:

Elmer Leon Towns is an American Christian academic, pastor and writer who co-founded Liberty University, the largest private non-profit university in the world, alongside Jerry Falwell in 1971. Towns is also a prominent Christian leader and speaker on the principles of church growth, church leadership, Christian education, Sunday school, and prayer and fasting. He has written over 170 books, eight of which are listed on the Christian Booksellers Association Best Selling List. In 1995, his book The Names of the Holy Spirit received the Gold Medallion Award from the Evangelical Christian Booksellers Association for Book of the Year in Biblical Study. Most recently Towns has served as Dean of the B. R. Lakin School of Religion, Dean of Liberty University Baptist Theological Seminary, and Distinguished Professor of Systematic Theology at Liberty University. In fall 2013, Towns announced he would be taking a sabbatical from his teaching and administrative duties to focus on speaking and writing.

A federal building is a building housing local offices of various government departments and agencies in countries with a federal system, especially when the central government is referred to as the "federal government".

Union Church may refer to:

First Methodist Episcopal Church, or variations with , South or and Parsonage, may refer to:

Thomas House and variations may refer to:

Mount Zion Methodist Church, or variations, may refer to:

Frederick Albert Hale was an American architect who practiced in states including Colorado, Utah, and Wyoming. According to a 1977 NRHP nomination for the Keith-O'Brien Building in Salt Lake City, "Hale worked mostly in the classical styles and seemed equally adept at Beaux-Arts Classicism, Neo-Classical Revival or Georgian Revival." He also employed Shingle and Queen Anne styles for several residential structures. A number of his works are listed on the U.S. National Register of Historic Places.

William N. Bowman was a prolific architect in Colorado.