Trioceros hoehnelli, commonly known as von Höhnel's chameleon, the helmeted chameleon, and the high-casqued chameleon, is a species of chameleon, a lizard in the family Chamaeleonidae. The species is endemic to eastern Africa.

T. hoehnelii is found in Kenya and Uganda. [1]

Trioceros hoehnelli is a small to medium-size chameleon, growing up to 10 inches in total length (including tail). Coloration is highly variable across its range. During morning hours, it may be seen basking in the sunlight, almost completely black in color to capture heat energy from the sunlight. This species has a single horn on the rostrum, a serrated back crest, and a spiny throat crest. [5] Males are typically larger than females with a larger casque, horn, and enlarged tail base.

Most chameleons in east Africa tend to be territorial and the high-casqued chameleon is no different. If males are placed together, they will hiss at each other, turn black, and compress their bodies to make them look larger. Dominant males display brightly colored patterns that differ from females or subordinate males, which often persist until they are defeated during a courtship battle. [6]

T. hoehnelli forms stable pair bonds during the mating season, which endure throughout the five months of pregnancy. After the birth, the pair usually splits up. [7]

Chameleons or chamaeleons are a distinctive and highly specialized clade of Old World lizards with 202 species described as of June 2015. These species come in a range of colours, and many species have the ability to change colour. 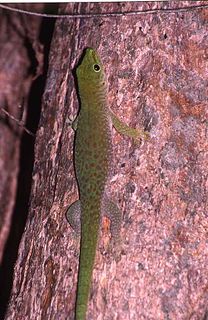 Koch's giant day gecko is a diurnal subspecies of gecko, a lizard in the family Gekkonidae. The subspecies is native to northwestern and western Madagascar and typically inhabits trees. It feeds on insects and nectar. 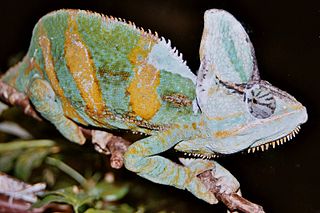 Chamaeleo is a genus of chameleons in the family Chamaeleonidae. Most species of the genus Chamaeleo are found in sub-Saharan Africa, but a few species are also present in northern Africa, southern Europe, and southern Asia east to India and Sri Lanka. 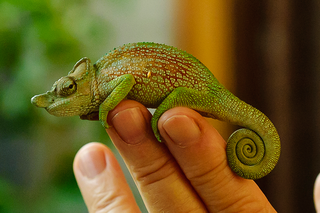 The strange-horned chameleon, Rwenzori plate-nosed chameleon or single welded-horn chameleon is a species of chameleon. It is native to the rainforests of the Ruwenzori Mountains of western Uganda and eastern Democratic Republic of the Congo.

Ludwig Ritter von Höhnel was an Austrian naval officer and explorer. He was trained at the naval academy in Fiume, then part of the Austrian empire. His brother was the naturalist Franz Xaver Rudolf von Höhnel (1852–1920).

The Cape dwarf chameleon is a chameleon native to the South African province of the Western Cape, where it is restricted to the region around Cape Town.

The Indian chameleon is a species of chameleon found in Sri Lanka, India, and other parts of South Asia. Like other chameleons, this species has a long tongue, feet that are shaped into bifid claspers, a prehensile tail, independent eye movement, and the ability to change skin colour. They move slowly with a bobbing or swaying movement and are usually arboreal. Strangely, they do not choose the background colour and may not even be able to perceive colour differences. They are usually in shades of green or brown or with bands. They can change colour rapidly and the primary purpose of colour change is for communication with other chameleons and for controlling body temperature by changing to dark colours to absorb heat. 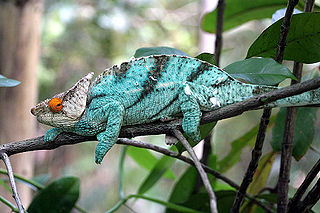 Parson's chameleon is a large species of chameleon in the family Chamaeleonidae. The species is endemic to isolated pockets of humid primary forest in eastern and northern Madagascar. It is listed on CITES Appendix II, meaning that trade in this species is regulated. While most chameleon species from Madagascar cannot be legally exported, a limited number of Parson's chameleons can be legally exported each year from its native country.

The Malagasy giant chameleon or Oustalet's chameleon is a large species of chameleon which is endemic to Madagascar, but also has been introduced near Nairobi in Kenya. It occurs in a wide range of habitats, even among degraded vegetation within villages, but is relatively rare in the interior of primary forest.

The western basilisk, or red-headed basilisk, is a large species of lizard in the family Corytophanidae. The species is endemic to northwestern South America. 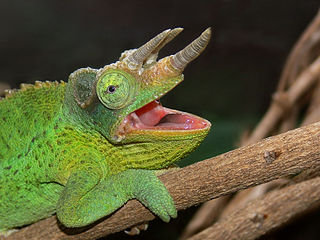 Trioceros is a genus of lizards in the family Chamaeleonidae. Trioceros was considered a subgenus of the genus Chamaeleo until 2009, when it was elevated to full genus level. 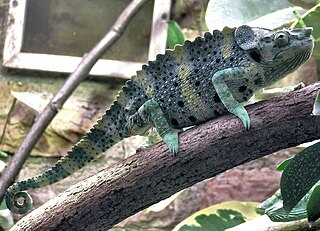 Trioceros melleri, with the common names Meller's chameleon and giant one-horned chameleon, is the largest species of chameleon from the African mainland. 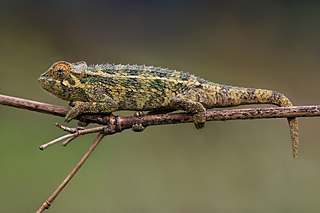 Chilabothrus gracilis is a species of nonvenomous snake in the Boidae family. It is endemic to Hispaniola. 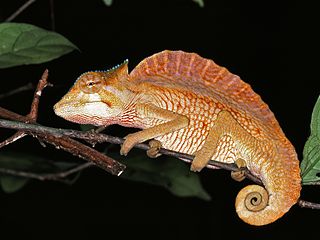 The crested chameleon, Trioceros cristatus, is a species of chameleon endemic to Africa. The species was first described by Samuel Stutchbury in 1837.

Furcifer verrucosus, also known as the warty chameleon, spiny chameleon or crocodile chameleon, is a species of small reptile endemic to Madagascar. It was first described by Georges Cuvier in 1829.

The African chameleon or Sahel chameleon is a species of chameleon native to the Sahel and Nile Valley, with an introduced population present in Greece. An average size may be around 34 cm (13 in) long, including its tail.

Owen's chameleon, also commonly known as Owen's three-horned chameleon, is a species of chameleon in the family Chamaeleonidae. The species is native to sub-Saharan Africa. Named after William Fitzwilliam Owen, who was a British naval officer and explorer, it was first described in 1831 by the naturalist John Edward Gray, and is the type species of the genus Trioceros.