Trip City is a novel set in the underground world of London nightclubs and concerns a fictional designer drug called FX. It was written by Trevor Miller and published in 1989 by Avernus Creative Media—a book imprint founded by science fiction author Brian Aldiss. [1] The novel was packaged with a soundtrack cassette tape of original music by A Guy Called Gerald. [1] Trip City is being reissued in June 2021 along with the soundtrack on vinyl for the first time. [2]

Tom Valentine wakes up in an unfamiliar loft apartment - not sure where he is or how he got there. Despite the chic surroundings, there’s blood on his shirt, evidence of a struggle and a Luger pistol on the Persian rug... Valentine is only certain of three things: The girl that he loved has been murdered. His mind has been warped by the effects of a powerful psychotropic drug and he only has one chance to bring the shrouded, corporate killers to justice... 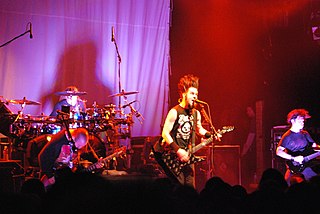 Trevor Ferguson, a.k.a. John Farrow, is a Canadian novelist who lived for many years in Hudson, Quebec, and he and his wife Lynne Hill Ferguson now live in Victoria, BC. He is the author of fourteen novels and four plays. He has been called Canada's best novelist both in Books in Canada and the Toronto Star.

Gerald Rydel Simpson, better known as A Guy Called Gerald, is a British record producer and musician. He was an early member of the electronic group 808 State, contributing to their debut LP Newbuild (1988) and hit single "Pacific State" (1989). He also achieved solo success with his 1988 hit single "Voodoo Ray", which became a touchstone of Manchester's acid house scene and reached No. 12 in the UK charts. He embraced breakbeat production in the 1990s, with his 1995 album Black Secret Technology becoming a "much-touted candidate for 'best jungle album ever.'" He also ran the London-based independent record label Juice Box Records from 1991 to 1998.

Pay It Forward is a 2000 American drama film directed by Mimi Leder. The film is based loosely on the novel of the same name by Catherine Ryan Hyde. It is set in Las Vegas, and it chronicles 11-year-old Trevor McKinney's launch of a goodwill movement known as "pay it forward". It stars Haley Joel Osment as Trevor, Helen Hunt as his alcoholic single mother Arlene McKinney, and Kevin Spacey as his physically and emotionally scarred social studies teacher Eugene Simonet. 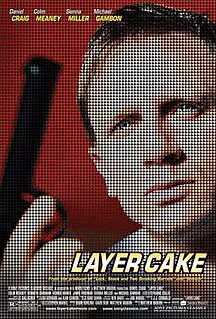 Layer Cake is a 2004 British crime film directed by Matthew Vaughn, in his directorial debut. The screenplay was adapted by J. J. Connolly from his 2000 novel of the same name. The film's plot revolves around a London-based criminal, played by Daniel Craig, who works in the cocaine trade and wishes to leave the drug business. The film also features Tom Hardy, Colm Meaney and Sienna Miller. Craig's character is unnamed in the film and is listed in the credits as "XXXX." 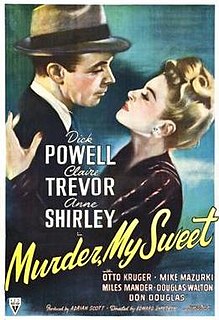 Swept Away is a 2002 adventure comedy romance film written and directed by Guy Ritchie; it is a remake of Lina Wertmüller's 1974 Italian film of the same name. The film stars Ritchie's then-wife Madonna and Adriano Giannini with a supporting cast featuring Bruce Greenwood, Jeanne Tripplehorn and Elizabeth Banks.

Layla Rose Miller, also known as Butterfly, is a fictional character in the Marvel Comics universe. She first appeared in House of M #4, and was created by Brian Michael Bendis and Oliver Coipel. Peter David has developed the character, placing Layla at the center of the ensemble of mutant private detectives in his title X-Factor. 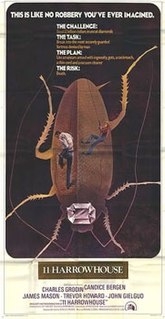 11 Harrowhouse is a 1974 British DeLuxe Color comedy thriller film directed by Aram Avakian and starring Charles Grodin, Candice Bergen, James Mason, Trevor Howard, and John Gielgud in Panavision. It was adapted by Charles Grodin based upon the novel by Gerald A. Browne with the screenplay by Jeffrey Bloom. It was made at Pinewood Studios with extensive location shooting in London, Ragley Hall in Warwickshire and at Quainton Road railway station. The film's sets were designed by the art director Peter Mullins.

Trevor Miller is an English screenwriter, author and playwright who the Record Mirror joked "is hailed by some as the voice of a generation". The London Evening Standard called his debut novel Trip City "an On the Road for the post warehouse party generation." He has since moved to Los Angeles, where he writes film screenplays. 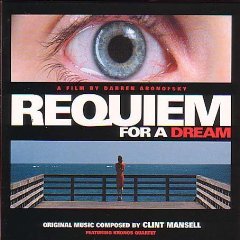 Requiem for a Dream is the soundtrack album from the 2000 film Requiem for a Dream. It was composed by Clint Mansell and performed by the Kronos Quartet. The music for the film is noted for its minimalist qualities in which it uses constant harmonies, a steady pulse, and often variation of musical phrases to drive a point. The album is best known for the track "Lux Aeterna."

"Kennedy and Heidi" is the 83rd episode of the HBO television series The Sopranos, the sixth episode of the second half of the show's sixth season, and the 18th episode of the season overall. Written by Matthew Weiner and series creator and showrunner David Chase, and directed by Alan Taylor, it premiered in the United States on May 13, 2007.

Vampire Kisses is a series of books written by Ellen Schreiber. Vampire Kisses is about a 16-year-old girl named Raven Madison who is a goth misfit in her polo-wearing, ordinary, town. When an old abandoned mansion finally gets new residents, the rumors start to spread. Everyone in the small town, which Raven refers to as “Dullsville”, believes that the new neighbors are actually secret bloodthirsty vampires. Even Raven, who has always loved vampires since she was little, believes the rumors. But one day, she encounters the attractive yet mysterious Alexander Sterling that lives in the mansion and feels like he is the only person that actually understands her. The two very quickly fall in love, but still, the question remains; are the Sterlings really vampires?

Steven Ogg is a Canadian actor. He is best known for his roles as Trevor Philips in the 2013 video game Grand Theft Auto V and Simon in The Walking Dead. He has also appeared on Murdoch Mysteries, Better Call Saul, Law & Order and Westworld. 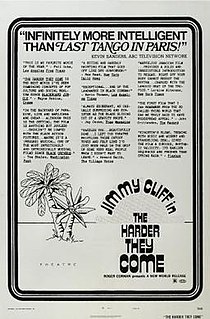 The Harder They Come is a 1972 Jamaican crime film directed by Perry Henzell and co-written by Trevor D. Rhone, and starring Jimmy Cliff. The film is most famous for its reggae soundtrack that is said to have "brought reggae to the world".