Triparadeisos or Triparadisus (Greek : Τριπαράδεισος) was a settlement in Lebanon near the sources of the Orontes. A paradeisos was a hunting reserve or pleasure-ground for the nobility of the Achaemenid (Persian) Empire, normally a walled-in area with groves of trees, wild animals, and running water.

Triparadeisos was the place where the Treaty of Triparadisus occurred, in which Alexander the Great's Empire was divided between his generals in 321 BC. It has been suggested that it was at the site of Roman Heliopolis (modern Baalbek). [1] Heliopolis was a colony of the Roman Empire in what is now Lebanon. The name was Colonia Julia Augusta Felix Heliopolitana.

Ancient Heliopolis -named Triparadeisos- initially formed part of the Diadochi kingdoms of Egypt & Syria. It had a small population of one thousand inhabitants during Alexander times.

It was annexed by the Romans during their eastern wars. The Italic settlers of the Roman colony "Colonia Julia Augusta Felix Heliopolitana" may have arrived as early as the time of Caesar but were more probably the veterans of two Roman Legions under Augustus, during which time it hosted a Roman garrison.

Indeed the veterans of two Roman legions were established in the city (and region) of Berytus by emperor Augustus: the fifth Macedonian and the third Gallic., [2] and Heliopolis from 15 BC to 193 AD formed part of the territory of Berytus. The population -probably nearly 15000 inhabitants- was mainly local in the second century under Hadrian with a few descendants of the Roman colonists and likely varied seasonally with market fairs and the schedules of the caravans to the coast and interior.

According to Schlumberger, during the Roman conquest the city's temple to Baʿal & Haddu was conflated first with the worship of the Greek sun god Helios [3] and then with the Greek and Roman sky god under the name "Heliopolitan Zeus" or "Jupiter". The present Temple of Jupiter (the biggest in Antiquity) presumably replaced an earlier one of Triparadeisos using the same foundations. 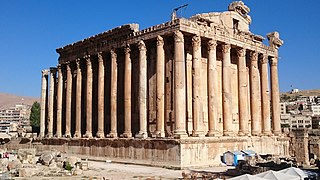 Baalbek is a city located east of the Litani River in Lebanon's Beqaa Valley, about 67 km (42 mi) northeast of Beirut. It is the capital of Baalbek-Hermel Governorate. In Greek and Roman times Baalbek was also known as Heliopolis. In 1998 Baalbek had a population of 82,608, mostly Shia Muslims, followed by Sunni Muslims and Christians.

Legio II Augusta was a legion of the Imperial Roman army that was founded during the late Roman republic. Its emblems were the Capricornus, Pegasus, and Mars. It may have taken the name "Augusta" from a victory or reorganization that occurred during the reign of Augustus. 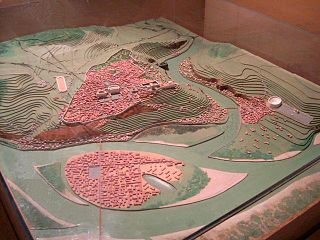 Colonia Copia Claudia Augusta Lugdunum was an important Roman city in Gaul, established on the current site of Lyon. The Roman city was founded in 43 BC by Lucius Munatius Plancus, but continued an existing Gallic settlement with a likely population of several thousands. It served as the capital of the Roman province of Gallia Lugdunensis and was an important city in the western half of the Roman Empire for centuries. Two emperors, Claudius and Caracalla, were born in Lugdunum. In the period AD 69–192 the city's population may have numbered 50,000 to 100,000, and possibly up to 200,000 inhabitants.

Augusta Raurica is a Roman archaeological site and an open-air museum in Switzerland located on the south bank of the Rhine river about 20 km east of Basel near the villages of Augst and Kaiseraugst. It is the site of the oldest known Roman colony on the Rhine.

Pax, more commonly known in English as Peace, was the Roman goddess of peace derived and adopted from the ancient Greek equivalent Eirene. Pax was seen as the daughter of the Roman king god Jupiter and the goddess Justice. Worship of Peace was organized and made popular during the rule of the emperor Augustus who used her imagery to help stabilise the empire after the years of turmoil and civil war of the late republic. Augustus commissioned an altar of peace in her honour on the Campus Martius called Ara Pacis., and the emperor Vespasian built a temple for her on called the Templum Pacis. Pax had a festival held for her on January 3. In art she is commonly depicted holding out olive branches as a peace offering, as well as a caduceus, cornucopia, corn and a sceptre. Pax is also often associated with spring. 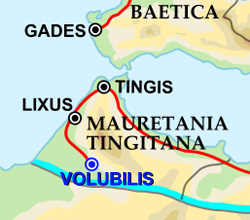 The Roman imperial cult identified emperors and some members of their families with the divinely sanctioned authority (auctoritas) of the Roman State. Its framework was based on Roman and Greek precedents, and was formulated during the early Principate of Augustus. It was rapidly established throughout the Empire and its provinces, with marked local variations in its reception and expression.

The Emesenedynasty, also called the Sampsigeramids or the Sampsigerami, were a Roman client dynasty of Arab priest-kings known to have ruled by 46 BC from Arethusa and later from Emesa, Syria, until between 72 and 78/79, or at the latest the reign of Emperor Antoninus Pius (138–161). Iamblichus, the famous Neoplatonist philosopher of the third century, was one of their descendants, as was empress Julia Domna, matriarch of the Severan dynasty. 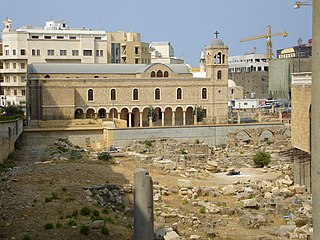 Berytus, briefly known as Laodicea in Phoenicia or Laodicea in Canaan from the 2nd century to 64 BCE, was the ancient city of Beirut from the Roman Republic through the Roman Empire and Early Byzantine period/late antiquity. Berytus became a Roman colonia that would be the center of Roman presence in the eastern Mediterranean shores south of Anatolia. The veterans of two Roman legions under Augustus were established in the city, that afterward quickly became Romanized and was the only fully Latin-speaking city in the Syria-Phoenicia region until the fourth century. Although Berytus was still an important city after earthquakes, around 400 AD Tyre was made the capital of the Roman province of Phoenicia. "Of the great law schools of Rome, Constantinople, and Berytus", the law school of Berytus stood "pre-eminent". The Code of Justinian was mostly created in this school.

The history of ancient Lebanon traces the course of events related to the geographic area in the Eastern Mediterranean of what is now known as Lebanon from the beginning of antiquity to the beginning of Arab rule.

Ius Italicum was a law in the early Roman Empire that allowed the emperors to grant cities outside Italy the legal fiction that they were on Italian soil. This meant that the city would be governed under Roman law rather than local law, would have a greater degree of autonomy in their relations with provincial governors, and that people born in the city automatically gained Roman citizenship. As Rome citizens, people were able to buy and sell property, were exempt from land tax, and the poll tax and were entitled to protection under Roman law. Ius Italicum was the highest liberty a municipality or province could obtain and was considered very favorable. Emperors, such as Augustus and Septimius Severus, made use of the law during their reign.

In early modern scholarship, a cult to a supposed Heliopolitan Triad of Jupiter, Mercury and Venus was thought to have originated in ancient Canaanite religion, adopted and adapted firstly by the Greeks, and then by the Romans when they colonised the city of Heliopolis in the Beqaa Valley of Lebanon. The Canaanite god Baʿal (Hadad) was equated with Jupiter Heliopolitanus as sun-god, Astarte or Atargatis with Venus Heliopolitana as his wife, and Adon, the god of spring, with either Mercury or Dionysus as third member of the triad, son of Heliopolitan Venus and Heliopolitan Jupiter.

Phoenicia under Roman rule describes the Syro-Phoenician city states ruled by Rome from 64 BCE to the Muslim conquests of the 7th century. The area around Berytus was the only Latin speaking and Romanized part of Aramaic-speaking Phoenicia.

The territory of modern Switzerland was a part of the Roman Republic and Empire for a period of about six centuries, beginning with the step-by-step conquest of the area by Roman armies from the 2nd century BC and ending with the Fall of the Western Roman Empire in the 5th century AD. 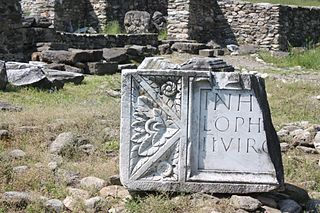 Colonia Ulpia Traiana Augusta Dacica Sarmizegetusa was the capital and the largest city of Roman Dacia, later named Ulpia Traiana Sarmizegetusa after the former Dacian capital, located some 40 km away. Built on the ground of a camp of the Fifth Macedonian Legion, the city was settled by veterans of the Dacian wars. From the very beginning it received the title of colonia and the status of ius Italicum. With an area of 30 hectares, a population between 20,000 and 25,000, and strong fortifications, Ulpia Traiana was the political, administrative and religious centre of Roman Dacia in the 2nd and 3rd centuries.

Ptolemais was an ancient port city on the Canaanite coast in the region of Palestine. It was also called Ptolemais in Canaan (or Akko, Ake, or Akre in Canaanite Language. It was an Ancient bishopric, which became a double Catholic titular see.

The Temple of Jupiter is a colossal Roman temple, the largest of the Roman world, situated at the Baalbek complex in Heliopolis Syriaca. The temple served as an oracle and was dedicated to Jupiter Heliopolitanus.