Hydrolase is a class of enzyme that is commonly used as biochemical catalysts that use water to break a chemical bond. This results in a division of a larger molecule to smaller molecules. Some common examples of hydrolase enzymes are esterases including lipases, phosphatases, glycosidases, peptidases, and nucleosidases. Esterases cleave ester bonds in lipids and phosphatases cleave phosphate groups off molecules. An example of crucial esterase is the acetylcholine esterase, which assists in transforming the neuron impulse into acetic acid after it the hydrolase breaks the acetylcholine into choline and acetic acid. Acetic acid is an important metabolite in the body, which becomes a nice intermediate for other reactions such as glycolysis. Lipases hydrolyze glycerides. Glycosidases cleave sugar molecules off carbohydrates and peptidases hydrolyze peptide bonds. Nucleosidases hydrolyze the bonds of nucleotides.

XAA may refer to:

Dipeptidyl peptidase-4 (DPP4), also known as adenosine deaminase complexing protein 2 or CD26 is a protein that, in humans, is encoded by the DPP4 gene. DPP4 is related to FAP, DPP8, and DPP9. The enzyme was discovered in 1966 by Hopsu-Havu and Glenner, and as a result of various studies on chemism, was called dipeptidyl peptidase IV [DP IV].

Procollagen peptidase is an endopeptidase involved in the processing of collagen. The proteases removes the terminal peptides of the procollagen. Deficiency of these enzymes leads to dermatosparaxis or Ehlers–Danlos syndrome.

Dipeptidyl peptidase is a type of enzyme classified under EC 3.4.14. 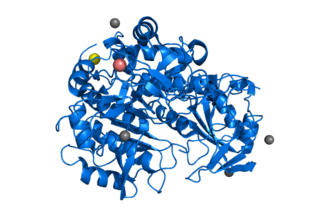 Tripeptidyl-peptidase 1, also known as Lysosomal pepstatin-insensitive protease, is an enzyme that in humans is encoded by the TPP1 gene. TPP1 should not be confused with the TPP1 shelterin protein which protects telomeres and is encoded by the ACD gene. Mutations in the TPP1 gene leads to late infantile neuronal ceroid lipofuscinosis.

Tripeptidyl-peptidase 2 is an enzyme that in humans is encoded by the TPP2 gene. Among other things it is heavily implicated in MHC (HLA) class-I processing, as it has both endopeptidase and exopeptidase activity.

Jansky–Bielschowsky disease is an extremely rare autosomal recessive genetic disorder that is part of the neuronal ceroid lipofuscinosis (NCL) family of neurodegenerative disorders. It is caused by the accumulation of lipopigments in the body due to a deficiency in tripeptidyl peptidase I as a result of a mutation in the TPP1 gene. Symptoms appear between ages 2 and 4 and consist of typical neurodegenerative complications: loss of muscle function (ataxia), drug resistant seizures (epilepsy), apraxia, development of muscle twitches (myoclonus), and vision impairment. This late-infantile form of the disease progresses rapidly once symptoms are onset and ends in death between age 8 and teens. The prevalence of Jansky–Bielschowsky disease is unknown, however NCL collectively affects an estimated 1 in 100,000 individuals worldwide. Jansky–Bielschowsky disease is also known as: late-infantile Batten disease, LINCL, or neuronal ceroid lipofuscinosis.

A tripeptidyl peptidase is a type of enzyme. 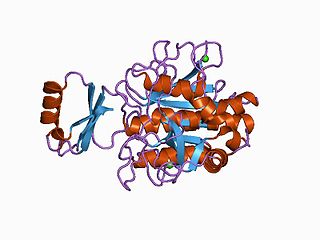 Subtilases are a family of subtilisin-like serine proteases. They appear to have independently and convergently evolved an Asp/Ser/His catalytic triad, like in the trypsin serine proteases. The structure of proteins in this family shows that they have an alpha/beta fold containing a 7-stranded parallel beta sheet. 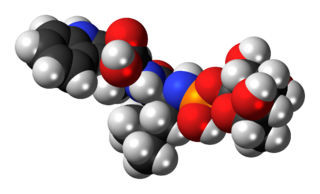 Ecadotril is a neutral endopeptidase inhibitor and determined by the presence of peptidase family M13 as a neutral endopeptidase inhibited by phosphoramidon. Ecadotril is the (S)-enantiomer of racecadotril. NEP-like enzymes include the endothelin-converting enzymes. The peptidase M13 family believed to activate or inactivate oligopeptide (pro)-hormones such as opioid peptides, neprilysin is another member of this group, in the case of the metallopeptidases and aspartic, the nucleophiles clan or family for example MA, is an activated water molecule. The peptidase domain for members of this family also contains a bacterial member and resembles that of thermolysin the predicted active site residues for members of this family and thermolysin occur in the motif HEXXH. Thermolysin complexed with the inhibitor (S)-thiorphan are isomeric thiol-containing inhibitors of endopeptidase EC 24-11.

Cytosol nonspecific dipeptidase is an enzyme. This enzyme catalyses the following chemical reaction

Xaa-Xaa-Pro tripeptidyl-peptidase is an enzyme. It catalyses the following chemical reaction

Pyroglutamyl-peptidase I is an enzyme. This enzyme catalyses the following chemical reaction

Signal peptidase I is an enzyme. This enzyme catalyses the following chemical reaction

Cerliponase alfa, marketed as Brineura, is an enzyme replacement treatment for Batten disease, which is a form of neuronal ceroid lipofuscinosis.