Triphylia[ pronunciation? ] (Greek : Τριφυλία, Trifylia, "the country of the three tribes") was an area of the ancient Peloponnese. Strabo and Pausanias both describe Triphylia as part of Elis, and it fell at times under the domination of the city of Elis, but Pausanias claims they reckoned themselves Arcadian, not Elean. They fell under the rule of Elis in the 8th century BC, and remained under Elean rule until the Spartans asserted their control in 402 BC. When the Spartans were defeated by the Thebans at the Battle of Leuctra in 371 BC, the Eleans attempted to reassert their control, but the Triphylians, in order to maintain their independence from Elis, joined the Arcadian League in 368 BC. In this period, their political fortunes were often shared by the areas on the border between Elis and Arcadia but in to the north of the River Alpheus; Xenophon mentions the Amphidolians and Acrorians and the city-states of Lasion, Margana, and Letrini in this context. The Amphidolians, Marganians, and Letrinians are remarkable in Xenophon for fielding slingers for the Peloponnesian army.

The most important city in Triphylia was Lepreum, which maintained its self-government in the 5th century BC. In his accounts of wars between the Eleans and their enemies in Sparta and Arcadia in this period, Xenophon also mentions Scillus, Macistus, Epium, Phrixa, and Epitalium as cities in Triphylia. 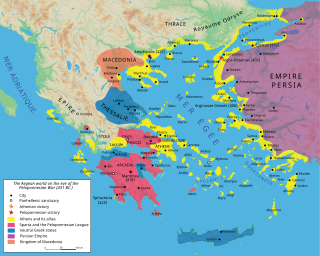 Epaminondas was a Greek general (strategos/Boeotarch) of Thebes and statesman of the 4th century BC who transformed the Ancient Greek city-state of Thebes, leading it out of Spartan subjugation into a pre-eminent position in Greek politics called the Theban Hegemony. In the process he broke Spartan military power with his victory at Leuctra and liberated the Messenian helots, a group of Peloponnesian Greeks who had been enslaved under Spartan rule for some 230 years after being defeated in the Messenian War ending in 600 BC. Epaminondas reshaped the political map of Greece, fragmented old alliances, created new ones, and supervised the construction of entire cities. He was also militarily influential and invented and implemented several major battlefield tactics.

Elis or Eleia is an ancient district in Greece that corresponds to the modern regional unit of Elis.

The Sacred Band of Thebes was a troop of select soldiers, consisting of 150 pairs of male lovers which formed the elite force of the Theban army in the 4th century BC, ending Spartan domination. Its predominance began with its crucial role in the Battle of Leuctra in 371 BC. It was annihilated by Philip II of Macedon in the Battle of Chaeronea in 338 BC. 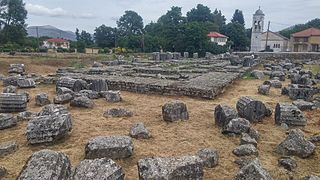 Tegea was a settlement in ancient Arcadia, and it is also a former municipality in Arcadia, Peloponnese, Greece. Since the 2011 local government reform it is part of the Tripoli municipality, of which it is a municipal unit with an area of 118.350 km2. It is near the modern villages of Alea and Episkopi.

Agis II was the 18th Eurypontid king of Sparta, the eldest son of Archidamus II by his first wife, and half-brother of Agesilaus II. He ruled with his Agiad co-monarch Pausanias.

The Second Battle of Mantinea was fought on July 4, 362 BC between the Thebans, led by Epaminondas and supported by the Arcadians and the Boeotian league against the Spartans, led by King Agesilaus II and supported by the Eleans, Athenians, and Mantineans. The battle was to determine which of the two alliances would dominate Greece. However, the death of Epaminondas and his intended successors coupled with the impact on the Spartans of yet another defeat weakened both alliances, and paved the way for Macedonian conquest led by Philip II of Macedon.

The Arcadian League was a league of city-states in ancient Greece. It combined the various cities of Arcadia, in the Peloponnese, into a single state. The league was founded in 370 BC, taking advantage of the decreased power of Sparta, which had previously dominated and controlled Arcadia. Mantinea, a city that had suffered under Spartan dominance, was particularly prominent in pushing for its founding. The league was responsible for the foundation of Megalopolis.

Heraea or Heraia was the most important town of ancient Arcadia on the Lower Alpheius. It was situated near the frontiers of Elis, and on the high road from Arcadia to Olympia. Its territory was called the Heraeatis or Heraiatis (Ἡραιᾶτις). According to Greek mythology it was said to have been founded by Heraeus, a son of Lycaon, and to have been called originally Sologorgus. At an early period the Heraeans concluded a treaty with the Eleians for mutual protection and support for one hundred years; the original of which treaty, engraved on a bronze tablet in the old Peloponnesian dialect, was brought from Olympia, and is now in the British Museum. This treaty is placed about the 50th Olympiad, or 580 BCE, since it belongs to a time when the Eleians exercised an undisputed supremacy over the dependent districts of Pisatis and Triphylia; and the Heraeans consequently were anxious to avail themselves of their support.

Alium or Alion was a fortified town in the district of Acroreia in ancient Elis, on the borders of Arcadia. Diodorus Siculus writes that the Spartans, under command of Pausanias of Sparta, marched against Elis with 4,000 men in 402 BCE, and that the towns of Opus, Alium, Eupagium, Thraustus, and Lasion were subdued. Xenophon mentions an Arcadian raid into Elis and took several towns of Acroreia around 365 BCE.

Lepreum or Lepreon, alternately named Lepreus or Lepreos (Λέπρεος) was an Ancient Greek city-state in Triphylia, a district of Elis. It was located 40 stadia away from the sea at the west end of Mount Minthi and built around two citadels. Surrounded by an abundance of natural resources, Lepreum became an important city in the Classical and Hellenistic ages where it became the capital of the Triphylia region. The city has also been identified by some scholars as the mythical city of Aepy, a city described by Homer in the Iliad but never discovered. The ruins of ancient Lepreum have been excavated near the present village Lepreo.

The Social War, also War of the Allies and the Aetolian War, was fought from 220 BC to 217 BC between the Hellenic League under Philip V of Macedon and the Aetolian League, Sparta and Elis. It was ended with the Peace of Naupactus.

Lasion was the chief town of the mountainous district of Acroreia in ancient Elis proper, situated upon the frontiers of Arcadia near Psophis. Lasion was a frequent object of dispute between the Arcadians and Eleians, both of whom laid claim to it. In the war which the Spartans carried on against Elis at the close of the Peloponnesian War, Pausanias, king of Sparta, took Lasion. The invasion of Pausanias is not mentioned by Xenophon in his account of this war; but the latter author relates that, by the treaty of peace concluded between Elis and Sparta in 400 BCE, the Eleians were obliged to give up Lasion, in consequence of its being claimed by the Arcadians. In 366 BCE the Eleians attempted to recover Lasion from the Arcadians; they took the town by surprise, but were shortly afterwards driven out of it again by the Arcadians. In 219 BCE, Lasion was again a fortress of Elis, but upon the capture of Psophis by Philip V of Macedon, the Eleian garrison at Lasion straightway deserted the place; after Philip took the town, he gave it to the Achaeans. Polybius mentions along with Lasion a fortress called Pyrgus, which he places in a district named Perippia. 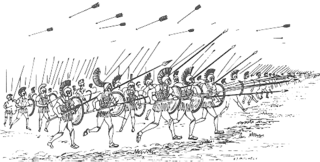 The Theban–Spartan War of 378–362 BC was a series of military conflicts fought between Sparta and Thebes for hegemony over Greece.

Triphylians were an ancient Greek tribe. They were residents of the western Peloponnese region, which in Homeric times was called Pylos and later Triphylia. The name Triphylia, literally emerged from the fact of the establishment of three different tribes in the area. The Homeric cities of Pylos, Kyparisieis and Dorion enjoyed great growth and prosperity. Triphylia and its residents had the benefit of independence and self-government until the second Messenian war, in 628 BC, when they fell into the authority of the Spartans, who later handed Triphylia over to the Eleans. Triphylians remained enslaved under the sovereignty of Eleans throughout the Peloponnesian war, excluding a short period during which they managed to recover their autonomy. In 366 BC Triphylians fell again to the jurisdiction of Elis, until the establishment of the Achaean League, when they gain their independence as part of the confederation’s members.

Antiochus of Arcadia was a man of ancient Greece who was the envoy sent by his state to the Persian court in 367 BCE, when embassies went to Susa from most of the Grecian states. The Arcadians, probably through the influence of Pelopidas, the Theban ambassador, were treated as of less importance than the Eleans—an affront which Antiochus resented by refusing the presents of the king.

Acroreia or Akroreia was a mountainous district of ancient Elis on the borders of Arcadia, in which the rivers Peneius and Ladon take their rise. The inhabitants of the district were called Acrocreii (Ἀκρωρεῖοι), and their towns appear to have been Thraustus, Alium, Opus, and Eupagium, to which Lasion may be added. The name is used in opposition to Κοίλη or Hollow Elis. Diodorus Siculus writes that the Spartans, under command of Pausanias of Sparta, marched against Elis with 4,000 men in 402 BCE, and that the towns of Opus, Alium, Eupagium, Thraustus, and Lasion were subdued. Xenophon mentions an Arcadian raid into Elis and took several towns of Acroreia around 365 BCE. Stephanus of Byzantium, who is followed by many modern writers, makes Acrocreii a town, and places it in Triphylia; but this error appears to have arisen from confounding the Acrocreii with the Paroreatae in Triphylia.

Epeium or Epeion or Epium or Epion or Aepion or Aipion was a town of Triphylia in ancient Elis, which stood between Makistos and Heraea, and may have been the successor settlement to Homeric Aepy. It is one of the six cities founded by the Minyans in the territory of Paroreatae and Caucones.

Macistus or Makistos, or Macistum or Makiston (Μάκιστον), was a city of ancient Elis, in Greece. It is one of the six cities founded by the Minyans in the territory of the Paroreatae and Caucones.

Elis was a polis (city-state) and the capital city of the ancient district of Elis, in ancient Greece. It was situated in the northwest of the Peloponnese, to the west of Arcadia. The position of the city of Elis was the best that could have been chosen for the capital of the country. Just before the Peneius emerges from the hills into the plain, the valley of the river is contracted on the south by a projecting hill of a peaked form, and nearly 500 feet (150 m) in height. This hill was the acropolis of Elis, and commanded as well the narrow valley of the Peneius as the open plain beyond. The ancient city lay at the foot of the hill, and extended across the river, as Strabo says that the Peneius flowed through the city; but since no remains are now found on the right or northern bank, it is probable that all the public buildings were on the left bank of the river, more especially as Pausanias does not make any allusion to the river in his description of the city.