Triplaris americana is a species of flowering plant in the knotweed family known by many common names, including ant tree [1] or pau-formiga ("ant tree"), [2] guacamayo, guayabo zancón, hormiguero, palo de Santa María, tachí, vara santa, [3] pau-de-novato, formigueiro, taxizeiro, [2] and devil tree. [4] It is native to Central and South America, occurring from Panama to Brazil. [1] It is also cultivated as an ornamental for its showy pink flowers. [5]

This tree grows in riparian habitat types, and is a colonizer of disturbed habitat. [6] It has been introduced to areas outside its native range, including Hawaii [1] and southern Africa. [5]

This species of tree is a myrmecophyte and it has a mutualistic relationship with ants, including Pseudomyrmex triplarinus . This kind of ant lives within the tree, feeding on substances produced by it and defending it against invaders. [7] This tree is known as a "novice tree" (pau-de-novato) because only one unfamiliar with the tree would touch it, soon discovering that the ants are aggressive and venomous. [2]

This tree is considered a noxious weed in southern Africa. [1] The fruits are dispersed on the wind and the seedlings easily take hold and become invasive, growing in the local habitat and displacing native plants. [5] 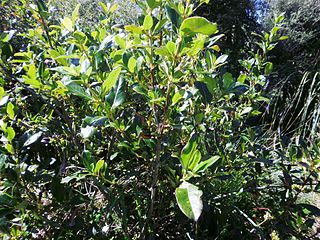 Coprosma robusta, commonly known as karamu, is a flowering plant in the family Rubiaceae. It can survive in many climates, but is most commonly found in coastal areas, lowland forests, or shrublands. Karamu can grow to be around 6 meters tall, and grow leaves up to 12 centimeters long. Karamu is used for a variety of purposes in human culture. The fruit that karamu produces can be eaten, and the shoots of karamu are sometimes used for medical purposes.

Miconia calvescens, the velvet tree, miconia, or bush currant, is a species of flowering plant in the family Melastomataceae. It is native to Mexico and Central and South America and it has become one of the world's most invasive species.

Salix cinerea is a species of willow native to Europe and western Asia.

Vachellia collinsii is a species of flowering plant. It grows in secondary succession in seasonally dry ecosystems in southern Central America, where it exhibits a symbiotic relationship with several species of ant. The ant-Vachellia system involving this species has been studied by ecologists like Daniel Janzen in Palo Verde National Park and Santa Rosa National Park, both in Guanacaste Province, Costa Rica. The ants chew holes in the tips of the hollow stipular thorns, known as domatia, so that they can enter, and create their colony inside. A single ant colony may span several V. collinsii trees.

Acacia mearnsii, commonly known as black wattle, late black wattle or green wattle, is a species of flowering plant in the family Fabaceae and is endemic to south-eastern Australia. It is usually an erect tree with smooth bark, bipinnate leaves and spherical heads of pale yellow or cream-coloured flowers followed by black to reddish brown pods. In some other parts of the world, it is regarded as an invasive species.

Pseudomyrmex is a genus of stinging, wasp-like ants in the subfamily Pseudomyrmecinae. They are large-eyed, slender ants, found mainly in tropical and subtropical regions of the New World.

Ficus aurea, commonly known as the Florida strangler fig, golden fig, or higuerón, is a tree in the family Moraceae that is native to the U.S. state of Florida, the northern and western Caribbean, southern Mexico and Central America south to Panama. The specific epithet aurea was applied by English botanist Thomas Nuttall who described the species in 1846. 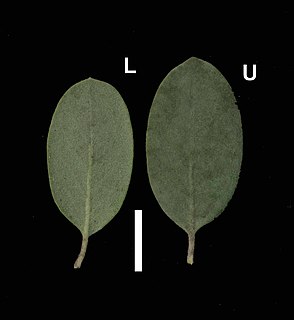 Arctostaphylos silvicola is a species of manzanita known by the common names Bonny Doon or silverleaf manzanita. It is endemic to the sandhills of the southern Santa Cruz Mountains in California's Santa Cruz and Santa Clara counties.

Senna didymobotrya is a species of flowering plant in the legume family known by the common names African senna, popcorn senna, candelabra tree, and peanut butter cassia. It is native to Africa, where it can be found across the continent in several types of habitat.

Poa diaboli is a rare species of grass known by the common name Diablo Canyon bluegrass. It is endemic to San Luis Obispo County, California, where it is known from about five occurrences in the San Luis Mountains near the coast. The type specimen was collected in Montaña de Oro State Park and the grass was described as a new species in 2003. The grass occurs on rugged mountaintops and north-facing slopes in thin soils covering shale rock within a few kilometers of the coastline. Its habitat includes chaparral, oak woodland, coastal sage scrub, and Bishop pine forest.

Daphnopsis hellerana is a rare species of flowering plant in the genus Daphnopsis of the family Thymelaeaceae. It is endemic to Puerto Rico, where there were only four populations remaining in 1992, with a total of 125 individuals. It was federally listed as an endangered species of the United States in 1988.

Aeschynomene americana is a species of flowering plant in the family Fabaceae (legume) known by many common names, including shyleaf, forage aeschynomene, American joint vetch, thornless mimosa, bastard sensitive plant (Jamaica), pega pega, pega ropa, antejuela, ronte, cujicillo, and dormilonga. It is native to Central America, parts of South America, the West Indies, and Florida. It is now found in the USA, in Australia and in South-East Asia.

Urera baccifera is a species of flowering plant in the nettle family known by many common names, including scratchbush, ortiga brava, pringamoza, mala mujer, chichicaste, nigua, guaritoto, ishanga, manman guêpes, and urtiga bronca. It is native to the Americas from Mexico through Central America into South America, as well as the Caribbean.

Pseudomyrmex triplarinus is a venomous species of ant that lives in symbiosis with trees of the genus Triplaris, including the South American species T. americana, T. cumingiama, and T. felipensis. The ant protects the trees against predation by other insects and animals. The ant's venom has anti-inflammatory properties.

Adenia globosa is a species of flowering plant in the passionflower family, Passifloraceae. It is native to tropical Africa, where it occurs in Ethiopia, Kenya, Somalia, and Tanzania. It is known as mpaga in Swahili.

Bocconia frutescens is a species of flowering plant in the poppy family known by many common names, including plume poppy, tree poppy, tree celandine, parrotweed, sea oxeye daisy, and John Crow bush in English, gordolobo, llorasangre, tabaquillo, palo amarillo, palo de toro and pan cimarrón in Spanish, and bois codine in French. It is native to the Americas, including Mexico, parts of Central and South America, and the West Indies. It is perhaps better known in Hawaii, where it is an introduced species and an aggressive invasive weed with rapid negative effects on local ecosystems. In other parts of the United States it is used as an ornamental plant for its "tropical"-looking foliage.

Desmanthus virgatus is a species of flowering plant in the legume family that is known by many common names, including wild tantan, prostrate bundleflower, dwarf koa, desmanto, acacia courant, acacia savane, pompon blank, adormidera, brusca prieta, frijolillo, ground tamarind, guajillo, guashillo, huarangillo, langalet, petit acacia, petit cassie, petit mimosa, virgate mimosa, and slender mimosa, as well as simply desmanthus. It is native to the American tropics and subtropics but is present elsewhere as an introduced species. In some areas it is cultivated as a fodder and forage crop.

Thonningia is a monotypic genus of flowering plants in the family Balanophoraceae containing the single species Thonningia sanguinea. It is distributed throughout much of southern and western Africa, particularly the tropical regions. Common names for the plant include ground pineapple. A familiar plant to humans, it has an extremely long list of common names in many African languages. Many names are inspired by the resemblance of the plant's inflorescence to a pineapple or palm tree. Some of the names can be translated as pineapple of the bush, duiker's kolanut, and crown of the ground.

Drypetes arguta, commonly known as the water ironplum, is a species of small tree or large bush in the family Putranjivaceae. It is native to tropical East Africa. It was first described in 1920 by the English botanist John Hutchinson, who named it Cyclostemon argutus. It was later transferred to the genus Drypetes.