At the University of Cambridge, a Tripos ( /ˈtraɪpɒs/ (

In most traditional English universities, a student registers to study one field exclusively, rather than having "majors" or "minors" as in American, Australian, Canadian, or Scottish universities. In practice, however, most degrees may be fairly interdisciplinary in nature, depending on the subject. The multi-part tripos system at Cambridge also allows substantial changes in field between parts; the Natural Sciences Tripos is especially designed to allow a highly flexible curriculum across the sciences.

The word has an obscure etymology, but may be traced to the three-legged stool candidates once used to sit on when taking oral examinations (see tripod ). [2] An apocryphal legend says that students used to receive one leg of a stool in each of their three years of exams, receiving the whole stool at graduation. Another tradition holds that the name derives from the three brackets printed on the back of the voucher. [3] [ citation not found ]

Initially, the only way to obtain an honours degree at Cambridge was the Mathematical Tripos examination.[ citation needed ] John Jebb proposed reforms in 1772, but implementation was blocked by various matters such as lack of expertise in the smaller colleges in a wider range of subjects. Classed examinations in law were introduced in 1816 by James William Geldart, who was then Regius Professor of Civil Law. Although a classical tripos was created in 1822, it was only open to those who already had high honours in mathematics or those who were the sons of peers. This restriction ended around 1850, and triposes in the moral sciences and natural sciences were introduced in the 1860s. [4]

The origin and evolution of the Cambridge Tripos can be found in William Clark's Academic Charisma and the Origin of the Research University. [5]

A tripos is divided into two parts: Part I, which is broadly based, and Part II, which allows specialization within the student's chosen field. Since a bachelor's degree usually takes three years to complete, either Part I or Part II is two years, and the other one year. The details of this can vary from subject to subject. There is also an optional Part III offered in some subjects, such as the Mathematical Tripos; these are not required to complete a bachelor's degree. Some Part III courses allow the student to graduate with both a master's degree and a bachelor's degree: for example, scientific Part III courses allow the student to graduate with an M.Sci. degree in addition to the B.A. degree which all Cambridge graduates receive. The Engineering Tripos is divided into four Parts (IA, IB, IIA, IIB), each corresponding to one academic year, and leads to the simultaneous awarding of the B.A. and M.Eng. degrees.

Students are examined formally at the end of each part and are awarded a degree classification for each part. The Part II classification is usually, but incorrectly, considered to be the classification for the overall degree. Most subjects are examined in all three years; for example, the Natural Sciences Tripos has examinations for Part IA, Part IB, Part II, and in some subjects, Part III. The English, History and ASNaC Triposes have preliminary rather than full examinations at the end of the first year, though History and English have recently scrapped Preliminary exams in the first year and moved to a IA, IB, II structure with classed examinations in all years.

Degree regulations state that, to be awarded a degree, a student must have passed two honours examinations (i.e., two Tripos examinations) – this could include a Part I and a Part II, two Part I exams, or (in some cases) a Part I and a Part IA. From October 2011, students can only be awarded an honours degree if they have been awarded honours in a Part II or Part III examination; [6] a combination of Part I examinations will allow a student to graduate with an Ordinary degree. [7] All students must complete at least nine terms of residence (three years of study) – making it impossible for students to simply complete two one-year tripos parts. This makes it easy for an undergraduate to switch out of a subject. So a one-year Part I (or Part IA) must be followed by a two-year Part II, and usually vice versa. More exotic combinations are possible, with the permission of the student's college and prospective department, but some combinations create a four-year bachelor's degree. A few subjects – i.e. Management Studies, Manufacturing Engineering, and Linguistics (prior to October 2010) – exist only as Part II, and can be preceded by any manner of Part I subject.

A student requesting to graduate (technically, 'admitted to a degree') is assessed mainly on two criteria: not only the Triposes they have completed (requirements laid by the statutes and ordinances of Cambridge), as recorded in the Cambridge University Reporter (Cambridge's gazette newspaper), but also the number of terms kept (at least nine required for a BA; 10 for an undergraduate master's degree). A student's requests to graduate should also be approved by their college, and be unopposed by the regent house, one of the university's governing bodies with vetoing powers.

Below is the list of Triposes offered by the University (Latin numerals in brackets indicate the Parts available): 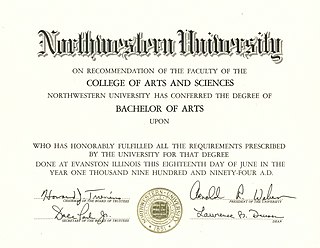 Bachelor of Arts is a bachelor's degree awarded for an undergraduate program in the arts, or in some cases other disciplines. A Bachelor of Arts degree course is generally completed in three or four years, depending on the country and institution. 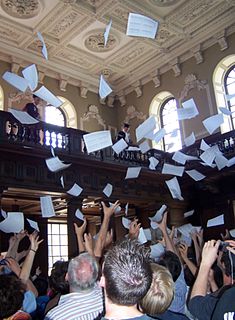 Part III of the Mathematical Tripos is a one-year Masters-level taught course in mathematics offered at the Faculty of Mathematics, University of Cambridge. It is regarded as one of the hardest and most intensive mathematics courses in the world and is taken by approximately 260 students each year. Roughly one third of the students take the course as a fourth year of mathematical study at Cambridge after Parts IA, IB, and II of the Mathematical Tripos, whilst the remaining two thirds take the course as a one-year course.

The Natural Sciences Tripos (NST) is the framework within which most of the science at the University of Cambridge is taught. The tripos includes a wide range of Natural Sciences from physics, astronomy, and geoscience, to chemistry and biology, which are taught alongside the history and philosophy of science. The tripos covers several courses which form the University of Cambridge system of Tripos. It is known for its broad range of study in the first year, in which students cannot study just one discipline, but instead must choose three courses in different areas of the natural sciences and one in mathematics. As is traditional at Cambridge, the degree awarded after Part II is a Bachelor of Arts (BA). A Master of Natural Sciences degree (MSci) is available to those who take the optional Part III. It was started in the 19th Century.

In the universities of Oxford, Cambridge, and Dublin, Bachelors of Arts of these universities are promoted to the degree of Master of Arts or Master in Arts (MA) on application after six or seven years' seniority as members of the university. As such, it is an academic rank, and not a postgraduate qualification. No further examination or study is required for this promotion.

The use of the term Prelim generally refers to an examination that qualifies a student to continue studies at a higher level, and/or allow the student to comprehend his/her studies and see how prepared they are for an upcoming examination. It can also act as a gauge on how knowledgeable one is within the chosen subject.

Honour Moderations are a set of examinations at the University of Oxford at the end of the first part of some degree courses.

The Classical Tripos is the taught course in classics at the Faculty of Classics, University of Cambridge. It is equivalent to Literae Humaniores at Oxford. It is traditionally a three-year degree, but for those who have not previously studied Latin and Greek, a four-year course has been introduced. It is not essential to have a Greek A-Level to study for the three-year degree as intensive Greek teaching is available, but most students will have a Latin A-Level.

Ali Moeen Nawazish is a Pakistani academic and columnist who serves as the General Manager of Strategy and a weekly columnist for Daily Jang.