Rayasam Venkata Tripurantakeswara Rao (R.V.T.K. Rao) popularly known as Tripura is a famous Telugu short story writer of the 1960s and 1970s. He was born on 2 September 1928 [1] in Purushottampur Tehsil of Ganjam District of Orissa state, India. His father was a surgeon and worked in Government Hospital there. [2]

Tripura had his initial schooling at Visakhapatnam in Andhra Pradesh and completed his M.A. (English) from Banaras Hindu University (BHU) in 1953. He did not complete his doctoral thesis on Graham Greene. Tripura initially worked at various places like Burma, Madanapalli, Visakhapatnam, and Jajpur, before settling down in 1960 at Tripura University, Agartala, in the North Eastern State of Tripura, India.

R.V.T.K. Rao wrote only 13 short stories in a decade spanning from 1963 to 1973 under the pen name Tripura. Another two stories between 1990–91 [1] His short stories were first published titled Tripura Kathalu in 1980 [3] ( Reference of Tripura in the book Indian Literature by Dr. Nagendra ). [4] Collection of his poems were published titled " Tripura Kafka Kavithalu "., [5] second edition in 1999(including his latest 2 stories), a third eBook only edition in 2011(with new forward ). [1]

Tripura is one of those writers who gave a new dimension to Telugu Short Story breaking away from the traditional way of story telling. He has a distinctive style of writing dwelling on the border of poetic lines, brisk pace & brevity of words ( similar to that of Hemingway's style ), inquisitive exploration into wide range of topics sweeps ordinary reader from his feet spinning into diggy heights. ( Review of Tripura Short Stories in Telugu language by Shri Kanaka Prasad ) [6]

Tripura very deftly brings out various human emotions of the prothagonists, pathos, insecurities, guilt, love, joy. The backdrops of his stories span at various places in India – soldiers life in cantonments and borders; revolutionary's dilemma about his journey; etc.

Tripura's short story Subbarayudu Rahasya Jeevitam though inspired by James Thurber’s short story of The Secret Life of Walter Mitty, retains the originality and nativity of a Telugu short story.

Tripura’s fans say that, "Tripura is not a famous figure, nor a popular figure, but more of a cult figure."

Tripura (R.V.T. Rao) was given The Yagalla Foundation Awards for literature, arts and service in the year 2010 at function held in Hyderabad on 11 March 2010. [7]

Tripura lived in Visakhapatnam in the state of Andhra Pradesh, India. He died on 24 May 2013. [8]

Gurajada Venkata Apparao was a noted Indian playwright, dramatist, poet, and writer known for his works in Telugu theatre. Rao wrote the play Kanyasulkam in 1892, which suhas considered the greatest play in the Telugu language. One of the pioneers of Indian theatre, Rao holds the titles Kavisekhara and Abyudaya Kavitha Pithamahudu. In 1910, Rao scripted the widely known Telugu patriotic song "Desamunu Preminchumanna".

P. Bhanumathi Ramakrishna was an Indian actress, director, music director, singer, producer, novelist and lyricist. Widely known as the first female super star of Telugu cinema, Bhanumathi appeared in over 100 films predominantly in Telugu and Tamil languages. She was awarded the Padma Bhushan in 2001 for her contribution to the Indian cinema. She was honored among "women in cinema" at the 30th International Film Festival of India.

Madhurantakam Rajaram was an Indian author who is considered one of the foremost of modern Telugu short story writers. He is the winner of Sahitya Akademi Award of 1993 and Katha prize for short stories for the years 1991 and 1993.

Vamsy is an Indian film director, screenwriter and music director known for his works in Telugu cinema. In 1985 he received the National Film Award for Sitaara. Vamsy has his own style of making the movie with art like the director Bapu. 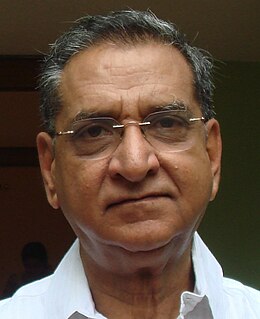 Sriraj Ginne is a progressive story writer, play-wright and film script writer in Telugu. His stories have been translated into various Indian languages. Sriraj has given expression to various aspects of the realities of middle-class life in his stories. Through his impressive stories, he portrayed the genesis of anomalies of the converted society. The positive consciousness of living is easily visible in his work. 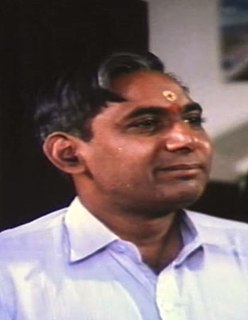 Sakshi Ranga Rao was an Indian character actor who worked in Telugu cinema and Telugu theatre. He appeared in about 450 films over a career spannign four decades, majority of which were comedies. Rao made his film debut in 1967 with Sakshi from which he derived his stage name. He then went onto to appear in successful films like Sirivennela, Swarna Kamalam, April 1st Vidudhala, Joker and Swarabhishekam.

Namini Subrahmanyam Naidu is a famous Telugu writer from Chittoor district of Andhra pradesh, India. His stories have received wide acclaim owing to the depiction of his life experiences as stories in Rayalaseema dialect. His stories have first been published in Andhra Jyothy newspaper during 1980s and 1990s.

Andhra Vishnu, better known as Srikakula Mahavishnu statue, was set up in Andhra in a pre-existing older temple. The previous deistic form worshiped in the temple is unknown, or was a crow with a family on its own flight as shown in the movie.

Potturi Vijayalakshmi is a Telugu writer well known for her humorous short stories.

Rachakonda Viswanatha Sastri (1922–1993) was a Telugu writer who published several novels and more than 60 short stories in six volumes. Often praised for his unique style, Ravi Sastry supported marginalized communities. Professionally, he was a lawyer.

Yaddanapudi Sulochana Rani was an Indian Telugu language novelist. She had a strong fan following since the 1970s and early 1980s, especially among women. Several of her stories were made into films and television serials. She won two Nandi Awards.

Vakati Panduranga Rao was a short story writer and journalist who for a long time edited the popular Telugu weekly, Andhra Prabha. His editorial, under the name Mitra Vakyam, made him immensely popular. A collection of these editorials was published in two volumes. Later, he worked for an English-language newspaper.

Peddibhotla Subbaramaiah was a Telugu short-story writer from Vijayawada. His short story collection Peddibhotia Subbaramaiah Kathalu was selected for Sahitya Akademi Award in Telugu for 2012. 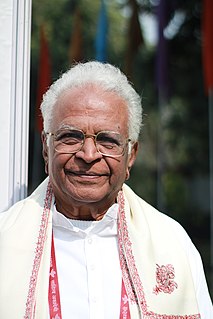 Kolakaluri Enoch is an Indian writer, teacher, and former Vice Chancellor of Sri Venkateswara University, Tirupati. He was honoured by the Government of India, in 2014, by bestowing on him the Padma Shri, the fourth highest civilian award, for his contributions to the field of literature.

Abburi Ramakrishna Rao was a pioneer of modern Telugu literature. He was a progressive Telugu writer, scholar, novelist, playwright, literary critic, humanist, professor of Library Science, and the Librarian. Gurajada Apparao, Rayaprolu Subbarao, and Abburi Ramakrishna Rao were considered as the trio of modern poetry, as all their works were published in the same period.