Trishira (Sanskrit: त्रिशिर, IAST: triśira, lit. he who has three heads) was a Rakshasa (a demon), and reference to him is found in the Ramayana. He was one of the son of Ravana and Dhanyamalini and his brothers are Atikaya, Narantaka and Devantaka. [1]

The Ramayana tells that he engaged Hanuman in a fight and hit him with a number of arrows. At this Hanuman told him that the arrows were nothing but like flowers being showered on his body. Thereafter, a duel ensued, in which Hanuman killed Trishira. [2] 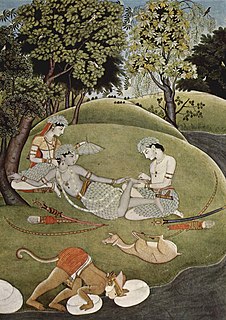 The Rāmāyana is a Sanskrit epic from ancient India. Ramayana is one of the two Itihasas of Hinduism, the other being the Mahābhārata. 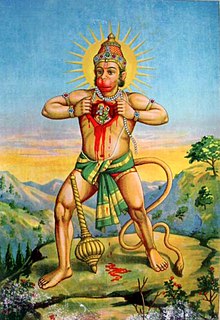 Hanuman is a Hindu god and a divine vanara (monkey) companion of the god Rama. Hanuman is one of the central characters of the Hindu epic Ramayana. He is an ardent devotee of Rama and one of the chiranjivis. Hanuman is also son of the wind-god Vayu, who in several stories played a direct role in Hanuman's birth. Hanuman is mentioned in several other texts, such as the epic Mahabharata and the various Puranas.

In the Hindu epic Ramayana, Maricha, or Mareecha is a demon, who was killed by Rama, the hero of the epic and an avatar of Lord Vishnu. He is mentioned as an ally of Ravana, the antagonist of the epic. His most notable exploit is his role in the kidnapping of Sita, Rama's wife. His son Kalanemi was killed by Hanuman. 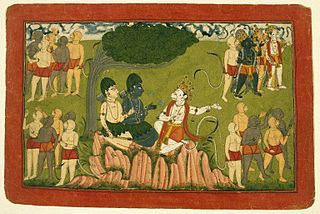 This character is about the vanara, in the Ramayana.

Indrajit or Meghanada, according to Hindu texts, was the crown prince of Lanka who conquered Indralok (Heaven). He is regarded as one of the greatest warriors in Hindu texts. He was mentioned in the Indian epic Ramayana. Indrajit played an active role in the great war between Rama and Ravana. He acquired many kinds of celestial weapons from his Guru Shukra. He defeated the Devas in heaven. Using Brahmastra, Indrajit killed 670 million Vanaras in a single day; nearly exterminating the entire half vanara race. No warrior on the Earth had ever achieved this statistical feat before in the Ramayana. 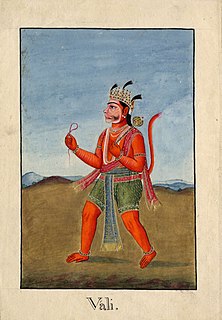 Vali, also known as Bali, was king of Kishkindha in the Hindu epic Ramayan. He was the husband of Tara, biological son of Vriksharaja, the elder brother of Sugriva and father of Angada. He was killed by Rama, an avatar of Vishnu. Vali was invincible during Treta Yuga. Vali defeated some of the greatest warriors like Ravana. Vali was blessed with the ability to obtain half the strength of his opponent. Rama killed Vali by hiding behind the trees. However, during his first attempt, Rama could not recognize which one is Vali and which Sugriva due to their similar looks. Thus, during the next attempt, Sugriva wore a garland of red flowers and went to battle with Vali. This time, Rama could recognize which was Vali and shot an arrow that killed him. 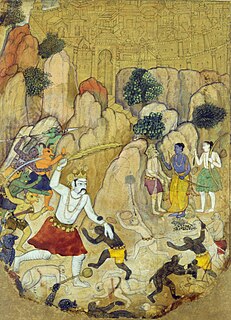 Atikaya was the son of Ravana and his second wife Dhanyamalini in the Ramayana epic. Atikaya was the elder brother of Narantaka, Devantaka and Trishira and was extremely powerful. Once upon a time when he infuriated Lord Shiva atop Mount Kailasha, the God hurled his Trishula at Atikaya, but Atikaya caught the Trishula in mid air and folded his hands before the lord in a humble manner. Lord Shiva was pleased at seeing this, and benevolently blessed Atikaya with the secrets of archery and divine weapons.

Mandodari was the queen consort of Ravana, the king of Lanka, according to the Hindu epic Ramayana. The Ramayana describes Mandodari as beautiful, pious, and righteous. She is extolled as one of the Panchakanya, the recital of whose names is believed to dispel sin. 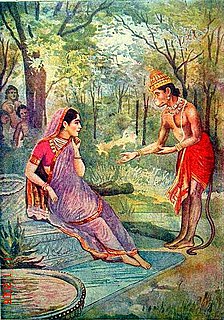 Akṣayakumāra, also known is Akshya in various languages, was the youngest son of Ravana and the brother of Meghanada. In the Ramayana, when Hanuman started destroying Ashoka Vatika after a conversation with Sita, Ravana sent him to the head of a Rakshasa army to take care of it. A warrior of just sixteen, he took the gaze of his father as his command and left for battle in his chariot. He fought with Hanuman, aiming various weapons at him. Though highly impressed by the young prince's valor and skills, Hanuman killed him in the end. 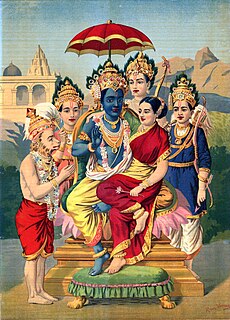 Adhyathmaramayanam Kilippattu is the most popular Malayalam version of the Sanskrit Hindu epic Ramayana. It is believed to have been written by Thunchaththu Ramanujan Ezhuthachan in the early 17th century, and is considered to be a classic of Malayalam literature and an important text in the history of Malayalam language. It is a retelling of the Sanskrit work Adhyatma Ramayana in kilippattu format. Ezhuthachan used the Grantha-based Malayalam script to write his Ramayana, although the Vatteluttu writing system was the traditional writing system of Kerala then. Recitation of Adhyathmaramayanam Kilippattu is very important in Hindu families in Kerala. The month of Karkitakam in the Malayalam calendar is celebrated as the Ramayana recitation month and Ramayana is recited in Hindu houses and temples across Kerala.

Ramayana: The Legend of Prince Rama is a 1993 anime film co-produced by Japan and India and produced and directed by Yugo Sako and based on the Indian epic the Ramayana. The director were Koichi Sasaki and Ram Mohan and the music was composed by Vanraj Bhatia.

Ramayana: The Epic is a 2010 Indian animated film from Maya Digital Media. Directed by Chetan Desai and produced by Ketan Mehta, it was released by Warner Bros. India on 15 October 2010.

Adbhuta Ramayana is a Śāktaḥ Sanskrit work traditionally attributed to the sage Valmiki. It is considerably more obscure than both the Valmiki Ramayana—generally considered the original version—as well as Tulsidas’ Awadhi version entitled Ramacharitamanasa, northern India's most popular version of the Ramayana story.

The Ananda Ramayana is an anonymously-authored Sanskrit text from the 15th century. The text has received little attention from scholars, though in some traditions, it is considered a principal source of Rama stories. 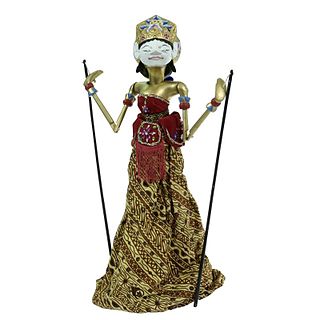 In the Hindu epic Ramayana, Nala, is the vanara (monkey), who is credited as the engineer of the Rama Setu, a bridge across the ocean between Rameswaram (India) and Lanka, identified with modern-day Sri Lanka, so forces of the god Rama can pass over to Lanka. The bridge is also known as Nala Setu, the bridge of Nala. Along with Nala, another vanara who is his twin brother called Nila is also credited as the builder of the bridge. Nala is described as the architect of the vanaras. He is described as the son of the architect-god Vishwakarma. Nala is also described to have fought in the battle between Rama and Ravana, the king of Lanka. 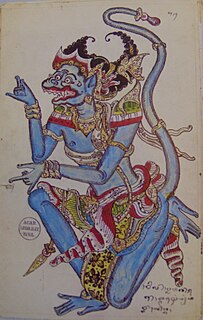 In the Hindu epic Ramayana, Nila, also spelled as Neela, is a vanara chieftain in the army of Rama, the prince of Ayodhya and avatar of the god Vishnu. He is the commander-in-chief of the monkey army under the monkey king Sugriva and is described as leading the army in Rama's battle against the rakshasa king Ravana of Lanka and as killing many rakshasas.

Kalanemi is a demon mentioned in various adaptations of the Hindu epic Ramayana. He is the son of Maricha, who was tasked by Ravana, the epic's main antagonist to kill Hanuman. Although not part of Valmiki Ramayana, his encounter with Hanuman has been described in several versions, but at last he was defeated by Hanuman. However, Kalnemi is said to be born as Kamsa in Dvapara Yuga.