Narvaja was born on March 17, 1819, in Córdoba, Argentina, to father Pedro Narvaja Dávila and mother Mercedes Montelles. He attended school in his hometown Colegio de los Franciscanos and later in Buenos Aires, where he received his doctorate in theology and jurisprudence.

At the end of 1840 Narvaja arrived in Montevideo, renewed his title as a Doctor of Jurisprudence and was received as a lawyer. Shortly after the Sitio Grande during the Uruguayan Civil War he returned to Buenos Aires, and later traveled to Bolivia in the Argentine Andean Provinces located in Chile until the end of 1843.

Upon his return to Montevideo he practiced as a lawyer, and published legal works and in 1855 he was admitted to the Facultad de Jurisprudencia as a professor of Civil Rights, a chair that he held until 1872, year in which the Tribunal Superior de Justicia was integrated. In 1875, he was elected the deputy for Durazno. This same year he was designated as the Minister of the Government, a position he maintained until February 1876, when the military epoch under President Lorenzo Latorre began.

Narvaja drafted the Código Civil de Uruguay , a work of exemplary merit which was put into effect in 1868; he was the author of the Código de Minería which became valid on January 17, 1876. He also contributed substantially to the correction of the Código de Comercio that had been prepared by Dr. Eduardo Acevedo Díaz. Later on, he drafted numerous works and laws, as well as being a decisive and effecter impeller of the legislation that gave Uruguay the ability to consolidate as an independent state.

In 1854 he married Joaquina Requena Sierra with whom he had a daughter named Mercedes. After her death in 1865, he remarried with Umbelina Tapia y Sierra with whom they had five children: Manuel Tomás, Tristán Hilario, Alfredo, Ricardo T., and Augusto.

Narvaja died on February 19, 1877, in Montevideo, after a brief illness.

He published, among others, as an author the following works:

A street in the Cordón neighborhood of Montevideo is named after him, equally famous is the street market which also bears his name, held every Sunday. [1] [2] [3] 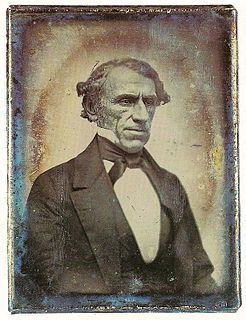 Dalmacio Vélez Sarsfield was an Argentine lawyer and politician who wrote the Civil Code of Argentina of 1869, which remained in force until 2015, when it was replaced by the new Código Civil y Comercial de la Nación.

Gaucho literature, also known as gauchesco ("gauchoesque") genre was a literary movement purporting to use the language of the gauchos, comparable to the American cowboy, and reflecting their mentality. Although earlier works have been identified as gauchoesque, the movement particularly thrived from the 1870s to 1920s in Argentina, Uruguay and southern Brazil after which the movement petered out, although some works continued to be written. Gauchoesque works continue to be read and studied as a significant part of Argentine literary history. 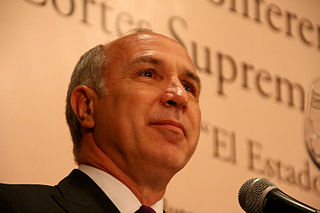 Ricardo Luis Lorenzetti is an Argentine judge graduated from the National University of the Littoral, Argentina, with a long national and international career. He used to be Chief Justice of the Supreme Court of Argentina (2007-2018), proposed by President Néstor Kirchner and approved by the Senate, assuming his position on December 12, 2004, covering the vacancy caused by the resignation of Justice Adolfo Vázquez. On November 7, 2006, he was appointed Chief Justice, officiated as of January 1, 2007. Currently, he is one of the five Justices of the Supreme Court. He was President of the Commission for the preparation of the Parliamentary Act to reform, update and unify the Civil and Commercial Codes of the Argentine Nation, Presidential Decree 191/2011.

Ruben Cotelo was an Uruguayan writer, journalist, and literary critic, known for his acute reviews on literature and cinema. He was married and divorced. He had three sons and one daughter. Emiliano Cotelo, his oldest son, is a radio journalist in Uruguay.

Daniel Esteban Herrendorf is an Argentine writer, essayist and philosopher.

Eduardo Acevedo Maturana was a Uruguayan jurist and politician.

Juan de Canaveris was an Piedmontese lawyer and politician, who served during the viceroyalty of Río de la Plata as accounting officer in the Tribunal de Cuentas de Buenos Aires. He had achieved a high social status in the Viceroyalty of the Río de la Plata, where he supported the revolutionary movements of May, being the only neighbor of Italian origin who attended in the Open Cabildo, of May 22, 1810.

Argentine Uruguayans are people born in Argentina who live in Uruguay. In 2010, there were over 10,000 Argentines living in Uruguayan territory.

Juan José Canaveris (1780–1837) was an Argentine jurist and politician, who served as military man, lawyer, notary, prosecutor and accountant of Buenos Aires. In 1809 he was honored by the Junta Suprema de Sevilla, for his heroic participation in the defense of Buenos Aires, during the English invasions in the Río de la Plata.

Feliciano Canaveris (1813–1843) was an Argentine military officer, who participated in the Argentine and Uruguayan Civil War. He was separated from the Confederate Army in 1835, and forced to go into exile in Montevideo in 1839, where he joined the ranks of the armies of Juan Lavalle and Fructuoso Rivera in the Banda Oriental.

Juan Manuel Canaveris (1804-1868) was an Argentine jurist and politician, who served in Buenos Aires and Montevideo as attorney, teacher and military man. He participated of the escort of honor in the funerals of Manuel Dorrego, and collaborated in the early days of government of Juan Manuel de Rosas.

Ángel Canaveris (1847-1897) was an Argentine pediatrician and psychiatrist, who had a preponderant role in the beginnings of Uruguayan Medicine. He served in Montevideo as general director of the Hospital Vilardebó and Hospital Maciel.

Jacobo Langsner was a Uruguayan playwright who had a strong presence in the Uruguayan theatre from 1950 onwards. His work is a showcase of middle-class hypocrisy.