Sucia Island is located 2.5 miles (4.0 km) north of Orcas Island in the San Juan Islands, San Juan County, Washington, United States. It is the largest of an archipelago of ten islands including Sucia Island, Little Sucia, Ewing, Justice, Herndon, the Cluster Islands islets, and several smaller, unnamed islands. The group of islands is about 2.5 miles (4.0 km) in length and just short of a half mile wide. Sucia island is roughly the shape of a hand. The total land area of all islands is 2.74 km². The main island of Sucia Island by itself is 2.259 km². There was a permanent population of four persons as of the 2000 census, all on Sucia Island. Sucia Island State Park is a Washington State Marine Park. 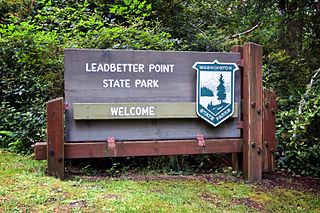 Leadbetter Point State Park is a nature preserve and public recreation area located sixteen miles (26 km) north of the city of Long Beach, Washington, at the northern tip of the Long Beach Peninsula. The state park is bounded by the Pacific Ocean to the west and Willapa Bay to the east and shares a border with the Willapa National Wildlife Refuge. The park's Martha Jordan Birding Trail goes through Hines Marsh, wintering grounds for trumpeter swans. Other park activities include hiking, boating, fishing, clamming, and beachcombing.

Jones Island State Park is a Washington state park coterminous with Jones Island, one of the San Juan Islands in San Juan County, Washington, USA. It is located one mile (1.6 km) west of the southwestern corner of Orcas Island and accessible only by boat. The island has a land area of 188 acres (76 ha) and no resident population. The island was named by the Wilkes Expedition in 1841 for naval officer Jacob Jones. 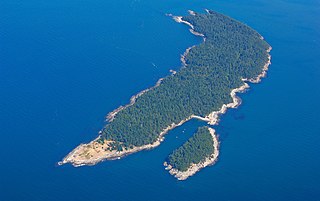 Patos Island is a small island in the San Juan Islands of the U.S. state of Washington. Since 1893, it has been home to the Patos Island Lighthouse, guiding vessels through Boundary Pass between Canada and the United States. The name comes from the Spanish pato, meaning "duck," which was given to the island in 1792 by Commander Dionisio Alcalá Galiano of the Sutil and Captain Cayetano Valdés y Flores of the Mexicana. 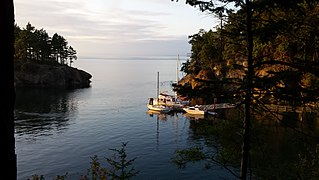 Matia Island is an island in the San Juan Islands of the U.S. state of Washington. The island's entire 145 acres (59 ha) comes under the protection of the U.S. Fish and Wildlife Service and is cooperatively managed by the Washington State Parks and Recreation Commission as Matia Island Marine State Park. Matia Island is a National Wildlife Refuge, part of the San Juan Islands National Wildlife Refuge. A 2-acre (0.81 ha) camping area around Rolfe Cove is managed as a State Marine Park by the Washington State Parks and Recreation Commission under an agreement dating back to 1959. Pets, wood collecting, and campfires are not allowed on the island. Except for the Wilderness Loop Trail and the campground, all areas above the high tide line are closed to the public. 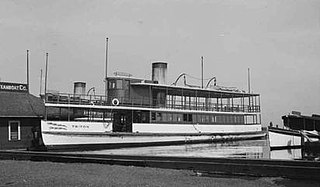 The steamboat Triton was a passenger ferry that operated on Lake Washington in the first part of the 20th century. 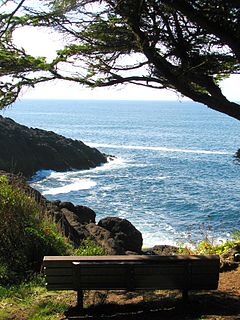 Rocky Creek State Scenic Viewpoint is a state park in Lincoln County in northwestern Oregon, United States. Administered by the Oregon Parks and Recreation Department, the 59-acre (24 ha) park lies along a bluff between Whale Cove and Rocky Creek. The park extends south along the Otter Crest Loop Road to the Rocky Creek Bridge.

Eagle Island State Park is a public recreation area in south Puget Sound occupying the entirety of Eagle Island in Pierce County, Washington. The five-acre (2.0 ha) island sits in Balch Passage between McNeil and Anderson islands about 750 feet (230 m) off Anderson Island's north shore. The island was named for Harry Eagle, one of the party members of the Wilkes Expedition of 1841.

Hope Island State Park - Mason is a Washington state park in Mason County that is accessible only by boat. It consists of 106 acres (43 ha) of old-growth forest and salt marsh with a 1.5-mile (2.4 km) beach on Puget Sound. Park activities include picnicking, camping, hiking, fishing, clamming, beachcombing, and birdwatching. The park is administered as a satellite of Jarrell Cove State Park. Water is not available on the island, and open-fires and pets are not permitted. 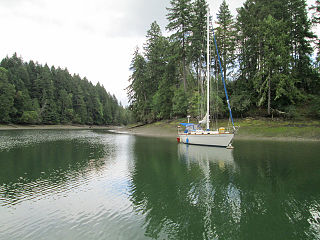 McMicken Island Marine State Park is a public recreation area on Harstine Island in south Puget Sound, Mason County, Washington. The state park's 222 acres (90 ha) include 11.5 acres (4.7 ha) of forested McMicken Island and 1,661 feet (506 m) of saltwater shoreline with a sheltered cove. A sand bar connects McMicken Island to Harstine Island at low tide. Park activities include hiking, boating, and harvesting shellfish. The park is administered as a satellite of Jarrell Cove State Park. It bears the name of William C. McMicken, who was Washington Surveyor General from 1873 to 1886.

Stretch Point State Park is a public recreation area occupying eight acres (3.2 ha) of land on the northern tip of Stretch Island in Mason County, Washington. The state park is only accessible by boat and is administered as a satellite of Jarrell Cove State Park.

Paradise Point State Park is a public recreation area on the East Fork Lewis River in Clark County, Washington. The state park is crossed by Interstate 5, which pierces the point in the river the park is named for. The park's 101 acres (41 ha) include 6,180 feet (1,880 m) of shoreline, swimming beach, campground, and hiking trails. 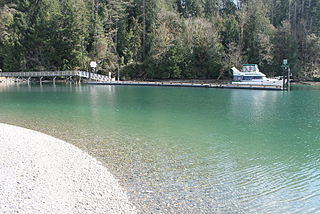 Penrose Point State Park is a 165-acre (67 ha) Washington state park located on Mayo Cove and Carr Inlet at the southern end of Puget Sound in Pierce County. The park has over 2 miles (3.2 km) of saltwater shoreline as well as 2.5 miles (4.0 km) of hiking and biking trails and an interpretive nature trail. Park activities include picnicking, boating, scuba diving, fishing, swimming, waterskiing, clam digging, crabbing, beachcombing, birdwatching, wildlife viewing, and horseshoes. The park was named after Dr. Stephen Penrose, the president of Whitman College in Walla Walla from 1884 to 1934. 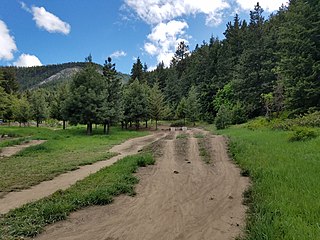 Wenatchee Confluence State Park is a public recreation area and nature preserve at the north end of the city of Wenatchee in Chelan County, Washington. The state park consists of 197 acres (80 ha) spanning the Wenatchee River at its confluence with the Columbia River. The park is bifurcated by the Wenatchee River into north and south sections that are connected by a footbridge. The north section, located in Sunnyslope, is suburban and recreational while the south section, located in West Wenatchee, is a man-made wetland area designated as the Horan Natural Area. The park is operated by the Washington State Parks and Recreation Commission under lease from the Chelan County Public Utility District, which owns the land. Park offerings include camping, boating, fishing, swimming, and various sports activities.