The tritone substitution is a common chord substitution found in both jazz and classical music. Where jazz is concerned, it was the precursor to more complex substitution patterns like Coltrane changes. Tritone substitutions are sometimes used in improvisation—often to create tension during a solo. Though examples of the tritone substitution, known in the classical world as an augmented sixth chord, can be found extensively in classical music since the Renaissance period, [1] they were not heard until much later in jazz by musicians such as Dizzy Gillespie and Charlie Parker in the 1940s, [2] as well as Duke Ellington, Art Tatum, Coleman Hawkins, Roy Eldridge and Benny Goodman. [3]

In tonal music, a conventional perfect cadence consists of a dominant seventh chord followed by a tonic chord. For example, in the key of C major, the chord of G7 is followed by a chord of C. In order to execute a tritone substitution, common variant of this progression, one would replace the dominant seventh chord with a dominant chord that has its root a tritone away from the original:

Franz Schubert's String Quintet in C major concludes with a dramatic final cadence that uses the third of the above progressions. The conventional G7 chord is replaced in bars 3 and 4 of the following example with a D♭7 chord, with a diminished fifth (G♮ as the enharmonic equivalent of A

); a chord otherwise known as a 'French sixth':

Christopher Gibbs (2000, p. 105) says of this ending: "within the last movement of the quintet, darker forces continue to lurk: the piece ends with a manic coda building to a dissonant fortissimo chord with a D-flat trill in both cellos, and then a final tonic inflected by a D-flat appoggiatura... The effect is overwhelmingly powerful." [4]

The closing bars of the first movement of Schubert's Piano Sonata in A major, D959 use both a conventional perfect cadence and a cadence featuring a tritone substitution, this time in the form of an 'Italian Sixth.' Bars 345-9 end with a regular cadence in A major. Instead of repeating this pattern to conclude the movement, the bars that follow replace the E7 chord with a Bb7.

There are similarities here with the ambivalent ending of Richard Strauss's tone poem Also Sprach Zarathustra. Here, according to Richard Taruskin, "Strauss contrived an ending that seemed to die away on an oscillation between tonics on B and C, with C … getting the last word. Had B been given the last word, or were the extreme registers reversed, the ploy would not have worked. It would have been obvious that the C (though placed many octaves lower than its rival, in a register the ear is used to associating with the fundamental bass) was, in functional terms, making a descent to the tonic B as part of a "French sixth" chord… Rather than an ending in two keys, we are dealing with a registrally distorted, interrupted, yet functionally viable cadence on B." [5]

Edward Sarath calls tritone substitutions a "non-diatonic practice that is indirectly related to applied chord functions... yield[ing] an alternative melodic pathway in the bass to the tonic triad." [6] Patricia Julien says it involves replacing "harmonic root movement of a fifth with stepwise root movements (e.g., G7–C becomes D♭7–C) so that although stepwise root movement is involved, the relationship between the chords is functional". [8]

The alt chord is a heavily altered dominant seventh chord, built on the alt scale, a scale where every scale degree except the root is flattened compared to the major scale. For example, C7alt is built from the scale C, D♭, E♭, F♭, G♭, A♭, B♭. Enharmonically, this is almost the same as the scale for G♭7, which is the tritone substitute of C7: G♭, A♭, B♭, C♭, D♭, E♭, F♭. The only difference is C, which is the sharp eleventh of the G♭7 chord. Thus, the alt chord is equivalent to the tritone substitution with a sharp–eleventh alteration.

One of the most common usages of the tritone substitution is in the 12-bar blues. Shown below is one of the simpler forms of twelve-bar blues.

Next, here is the same 12 bars, except incorporating a tritone substitution in bar 4; that is, with G♭7 substituted for C7.

The second common usage of the tritone substitution is in ii–V–I progression, which is extremely common in jazz harmony. This substitution is particularly suitable for jazz because it produces chromatic root movement. For example, in the progression Dm7–G7–CM7, substituting D♭7 for G7 produces the downward movement of D–D♭–C in the roots of the chords, typically played by the bass. This also reinforces the downward movement of the thirds and sevenths of the chords in the progression (in this case, F/C to F/C♭ to E/B).

Play  (help·info) without a tritone substitution.

In other tuning systems

In jazz, a turnaround is a passage at the end of a section which leads to the next section. This next section is most often the repetition of the previous section or the entire piece or song. 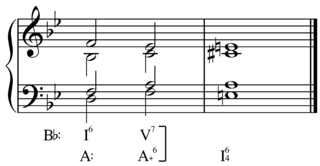 In music, an irregular resolution is resolution by a dominant seventh chord or diminished seventh chord to a chord other than the tonic. Regarding the dominant seventh, there are many irregular resolutions including to a chord with which it has tones in common or if the parts move only a whole or half step. Consecutive fifths and octaves, augmented intervals, and false relations should still be avoided. Voice leading may cause the seventh to ascend, to be prolonged into the next chord, or to be unresolved.