In its early decades the Nuremberg factory produced models with the same 499 cc and 545 cc four-stroke engines as its sister plant in Coventry.

Confusion between motorcycles produced by the Coventry and Nuremberg Triumph companies led to the latter's products being renamed "Orial" for certain export markets. However, in the 1920s there was already an Orial motorcycle maker in Lyon, France, so the Nuremberg motorcycles were renamed again as "TWN", standing for Triumph Werke Nürnberg. [3]

After 1913 the English and German factories diverged, with the Nuremberg works making motorcycles with 248 cc and 269 cc two-stroke engines. After the Second World War Triumph made successful models including the 200 cc Cornet split single two-stroke and the split-single 1 cylinder 350 cc Boss. A split single has one "divided" cylinder (with 2 bores) but only one common combustion chamber and spark plug. Triumph/TWN's production of split singles began with the BD250 in 1939 designed by Otto Rieze.[ citation needed ]

In 1956 Max Grundig took over the Nuremberg company, merged it with his Adler motorcycle and typewriter business and terminated motorcycle production under the Triumph and TWN names.

Puch is a manufacturing company located in Graz, Austria. The company was founded in 1899 by the industrialist Johann Puch and produced automobiles, bicycles, mopeds, and motorcycles. It was a subsidiary of the large Steyr-Daimler-Puch conglomerate.

The Calthorpe Motor Company based in Bordesley Green, Birmingham, England made a range of cars, motorcycles and bicycles from 1904 to 1932.

The Automobilwerk Eisenach (AWE) was an automobile manufacturer in Eisenach, Germany.

Rex, Rex Motorcycles, Rex-Acme, was a car and motorcycle company which began in Birmingham, England in 1900. Rex soon merged with a Coventry maker of bicycles and cars named Allard and then later in 1922 the company merged with Coventry's 'Acme' motorcycle company forming 'Rex Acme'. The company existed until 1933, and, in its heyday, was considered one of the greatest names in the British motorcycle industry. 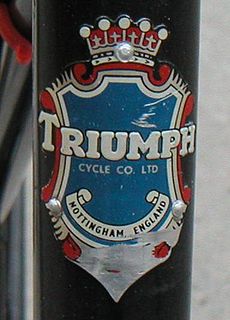 Triumph Cycle Co. Ltd., based in Nottingham, England, was a bicycle manufacturing company.

Hercules was a brand of bicycle and motorcycle manufactured in Germany. 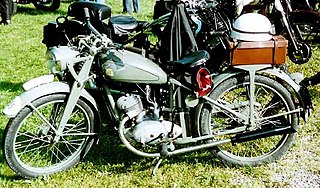 Ardie was a company in Nürnberg, Germany that manufactured motorcycles from 1919 until 1958. The company's name derives from that of its founder, Arno Dietrich.

Express Werke AG was a company formed in 1884 in Neumarkt in der Oberpfalz, Germany that manufactured bicycles and motorcycles. In the 1930s Express built mopeds and lightweight motorcycles with 75cc and 98cc Sachs engines. From 1949 the company resumed production using Sachs and ILO engines up to 248cc. In 1958 Express merged with DKW and Victoria to form Zweirad Union. Zweirad Union terminated Express production in 1959.

Siegfried Bettmann was a bicycle, motorcycle and car manufacturer and initiator of the Triumph Motorcycle Company. In 1914 he established the Annie Bettmann Foundation to help young people start businesses. Triumph became one of the most famous motorcycle trade-names of the world. Bettmann was also Mayor of Coventry from 1913-1914.

Hazlewoods Limited of Coventry were manufacturers of bicycles from 1895, and motorcycles from 1911 until closure c. 1923. They were typical many British companies who proceeded from bicycle manufacture to motorised bicycles, a change made possible by engine and geared hub suppliers.