Triumph 1800 may refer to one of the following Triumph automobiles: 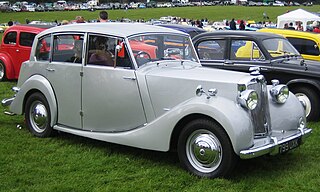 Triumph of the Will is a 1935 Nazi propaganda film directed, produced, edited, and co-written by Leni Riefenstahl. It chronicles the 1934 Nazi Party Congress in Nuremberg, which was attended by more than 700,000 Nazi supporters. The film contains excerpts from speeches given by Nazi leaders at the Congress, including Adolf Hitler, Rudolf Hess and Julius Streicher, interspersed with footage of massed Sturmabteilung (SA) and Schutzstaffel (SS) troops and public reaction. Hitler commissioned the film and served as an unofficial executive producer; his name appears in the opening titles. The film's overriding theme is the return of Germany as a great power, with Hitler as the leader who will bring glory to the nation. Because the film was made after the 1934 Night of the Long Knives, many prominent Sturmabteilung (SA) members are absent—they were murdered in that Party purge, organised and orchestrated by Hitler to replace the SA with the Schutzstaffel (SS) as his main paramilitary force.

British Leyland was an automotive engineering and manufacturing conglomerate formed in the United Kingdom in 1968 as British Leyland Motor Corporation Ltd (BLMC), following the merger of Leyland Motors and British Motor Holdings. It was partly nationalised in 1975, when the UK government created a holding company called British Leyland, later BL, in 1978. It incorporated much of the British-owned motor vehicle industry, which constituted 40 percent of the UK car market, with roots going back to 1895. 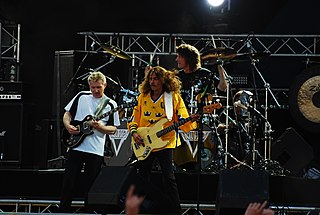 Triumph is a Canadian hard rock band formed in 1975 that was popular in the late 1970s and the 1980s, building on its reputation and success as a live band. Between the band's 16 albums and DVDs, Triumph has received 18 gold and 9 platinum awards in Canada and the United States. Triumph was nominated for multiple Juno Awards, including Group of the Year Award in 1979, 1985, 1986, and 1987.

HMS Triumph, originally known as Libertad, was the second of the two Swiftsure-class pre-dreadnought battleships of the Royal Navy. The ship was ordered by the Chilean Navy, but she was purchased by the United Kingdom as part of ending the Argentine–Chilean naval arms race. Triumph was initially assigned to the Home Fleet and Channel Fleets before being transferred to the Mediterranean Fleet in 1909. The ship briefly rejoined the Home Fleet in 1912 before she was transferred abroad to the China Station in 1913. Triumph participated in the hunt for the German East Asia Squadron of Maximilian Graf von Spee and in the campaign against the German colony at Tsingtao, China early in World War I. The ship was transferred to the Mediterranean in early 1915 to participate in the Dardanelles Campaign against the Ottoman Empire. She was torpedoed and sunk off Gaba Tepe by the German submarine U-21 on 25 May 1915.

A nacelle is a housing, separate from the fuselage, that holds engines, fuel, or equipment on an aircraft. In some cases—for instance in the typical "Farman" type "pusher" aircraft, or the World War II-era P-38 Lightning—an aircraft's cockpit may also be housed in a nacelle, which essentially fills the function of a conventional fuselage. The covering is typically aerodynamically shaped. 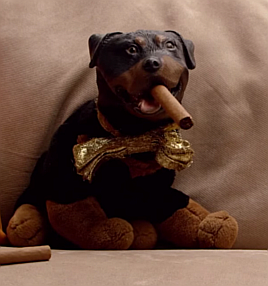 Triumph the Insult Comic Dog is a puppet character puppeteered and voiced by Robert Smigel, best known for mocking celebrities in an Eastern European accent. As his name indicates, Triumph's comedic style is almost exclusively insult comedy. A Montenegrin Mountain Hound, Triumph often puffs a cigar, which usually falls out of his mouth when he starts talking. He debuted in 1997 on NBC's Late Night with Conan O'Brien and also appeared on The Tonight Show with Conan O'Brien from time to time, as well as the short-lived TV Funhouse, TBS's Conan, and Adult Swim's The Jack and Triumph Show. Smigel and Triumph have been ejected from several events for Triumph's antics, including Westminster, the Honolulu line for auditions for American Idol, and the 2004 Democratic National Convention.

The Triumph Spitfire is a small British two-seat sports car, introduced at the London Motor Show in 1962. The vehicle was based on a design produced for Standard-Triumph in 1957 by Italian designer Giovanni Michelotti. The car was largely based upon the chassis of the Triumph Herald saloon, but shortened and without the Herald's outrigger sections. The Herald's running gear and Standard SC engine were also carried over. The Spitfire was manufactured at the Standard-Triumph works at Canley, in Coventry.

The Triumph 2000 is a mid-sized, rear wheel drive automobile which was produced in Coventry by the Triumph Motor Company between 1963 and 1977. It was introduced on 15 October 1963. 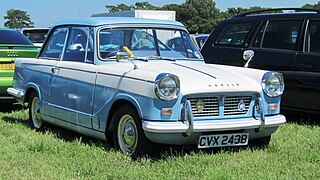 Carnival Sunrise will be the second in the Sunshine-Class of cruise ships, rejoining the Carnival fleet in April 2019. As she and her three younger sisters are each a modified version of the lead ship in the class, she is sometimes referred to as the first of the Triumph-class of cruise ships. Along with her sisters Carnival Sunshine and Carnival Victory, she is operated by Carnival Cruise Line. Carnival Sunrise will be homeported in Norfolk, Virginia, New York City, New York, and Fort Lauderdale, Florida following her drydock. 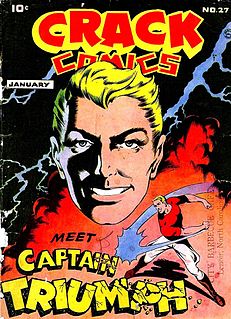 Captain Triumph is a superhero from the Golden Age of Comics who first appeared in Crack Comics #27, published in January 1943 by Quality Comics. The character was later obtained by DC Comics, though by that time he had already lapsed into the public domain. Some of his Golden Age adventures were reprinted by AC Comics in the Men of Mystery anthology. He is not to be confused with another DC Comics property, Triumph.

Introduced in 2006, the Triumph Daytona 675 is a three-cylinder sport bike, and the smallest of the Triumph triples. Built by Triumph Motorcycles, it replaced their four-cylinder Daytona 650. The 675 proved to be remarkably light, nimble and powerful, and it was very successful against the Japanese 600cc competition. In 2016, Triumph ceased production of the base model Daytona 675 citing diminishing demand for super sport bikes and increasingly strict European emission standards. Triumph continued to produce the up spec Triumph Daytona 675R model until the 2018 model year. Triumph filed a new trademark for the Daytona fuelling rumors that there may be a future version sporting the new 765cc engine.

The Destiny class is a class of cruise ships owned by Carnival Cruise Line. The class was modified after the lead ship, Carnival Destiny, was launched. This is reflected in both Carnival Triumph and Carnival Victory.

BC Zenit Saint Petersburg, formerly known as BC Dynamo Moscow Region (2003–2007) and BC Triumph Lyubertsy (2007–2014), is a Russian professional basketball team that is located in Saint Petersburg, Russia, since 2014. The club competes in the VTB United League. Their home court is Sibur Arena. The club is sponsored by Gazprom.