Triumph Palace (Russian : Триу́мф-Пала́с, transliterated as Triumf Palas) is the tallest apartment building in Moscow and all of Europe. It is sometimes called the Eighth Sister because it is similar in appearance to the Seven Sisters [4] skyscrapers built in Moscow under Joseph Stalin through the 1950s. Construction began in 2001 and was completed in 2006.

Palace of Culture and Science, is a notable high-rise building in central Warsaw, Poland. With a total height of 237 metres (778 ft) it is the second tallest building in Poland after Varso, the 5th-tallest building in the European Union and one of the tallest on the European continent. Constructed in 1955, it houses various public and cultural institutions such as cinemas, theatres, libraries, sports clubs, university faculties and authorities of the Polish Academy of Sciences. Since 2007 it has been enlisted in the Registry of Objects of Cultural Heritage. 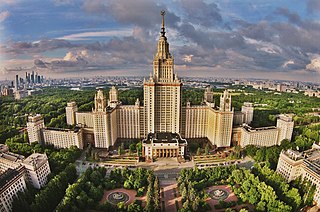 The Seven Sisters are a group of seven skyscrapers in Moscow designed in the Stalinist style. They were built from 1947 to 1953 in an elaborate combination of Russian Baroque and Gothic styles. At the time of construction, they were the tallest buildings in Europe, and the main building of Moscow State University remained the tallest building in Europe until 1997.

The Eighth Sister is the unbuilt project for the Zaryadye skyscraper in Moscow. It would have been eighth sister to the group of seven postwar Stalinist skyscrapers in Moscow, Russia. The architect was Dmitry Chechulin. 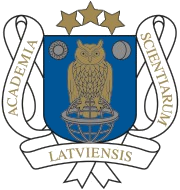 Eurasia, also known as Steel Peak, is a 308.9 meters (1,013 ft) tall supertall skyscraper located on plot 12 of the MIBC in Moscow, Russia. The mixed-use skyscraper occupies a total area of 207,542 square metres (2,233,960 sq ft), and houses offices, apartments, a hotel, and a fitness center. It is the sixth-tallest building in Russia, the seventh-tallest building in Europe, and the 72nd-tallest building in the world. Construction of Eurasia started in 2006 and was completed in 2014.

Imperia Tower, is a complex located on plot 4 of the MIBC in Moscow, Russia. The 287,723 square metres (3,097,020 sq ft) mixed-use complex includes a completed 60-story skyscraper with a height of 239 metres (784 ft) and a 14-story building with a height of 53 metres (174 ft) that is currently under construction. Construction of the skyscraper started from 2001 to 2002, but halted in 2003 until it was resumed in 2006 and was completed in 2011. The 14-story building started construction in 2013 and is planned to be finished by 2018. The 60-story skyscraper of the complex is the fifteenth-tallest building in Russia, and the 24th-tallest building in Europe. 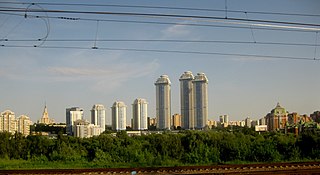 Sparrow Hills or Vorobyovy Gory is a residential complex in Moscow. The complex located at the base of Sparrow Hills and comprises seven buildings. 1,039 apartments are located in that complex, that was completed in 2004. As of 2007, its building 2 is the 4th tallest building in Moscow and the 3rd tallest residential building in Europe, with the tallest being a fellow Muscovite, the Triumph-Palace. The complex' address is Mosfil'movskaya ulitsa, 70. 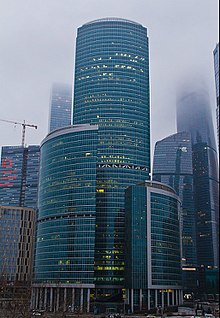 Naberezhnaya Tower is an office complex composed of two skyscrapers and a high-rise located on plot 10 in the Moscow International Business Center (MIBC) in Moscow, Russia with a total area of 254,000 m2 (2,730,000 sq ft). The buildings are named after the first three letters of the alphabet and from the lowest height to the tallest: the 17-story tall Tower A, the 27-story tall Tower B, and the 59-story tall Tower C. Construction of the complex started in 2003, with Tower A being completed in 2004, Tower B in 2005, and Tower C in 2007.

The Evolution Tower is a skyscraper located on plots 2 and 3 of the MIBC in Moscow, Russia. The 55-story office building has a height of 246 metres (807 ft) and a total area of 169,000 square metres (1,820,000 sq ft). Noted in Moscow for its futuristic DNA-like shape, the building was designed by British architect Tony Kettle in collaboration with University of Edinburgh's Professor of Art Karen Forbes. Construction of the tower began in 2011 and was completed in late 2014. In 2016, Transneft bought the Evolution Tower for US$1 billion to establish its headquarters. The skyscraper is the twelfth-tallest building in Russia, and the 20th-tallest building in Europe. 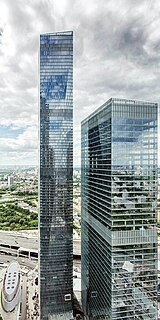 The IQ-quarter is a mixed-use complex composed of two skyscrapers and a high-rise located on plot 11 in the Moscow International Business Center (MIBC) in Moscow, Russia with a total area of 201,430 m2 (2,168,174 sq ft). The skyscrapers are named Towers 1 and 2, with the latter being the tallest, and the high-rise just known as the IQ-quarter hotel or Tower 3. Construction of the complex began in 2008 and finished in 2016. 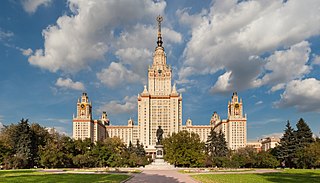