The Super 9's were the first Triumphs to use 12-volt electrics (early Southern Cross's still used 6-volt for a short period) and the first to be fitted with a Coventry Climax engine, which was made under licence by Triumph. Two 6-volt batteries were housed under the rear passenger floor, while the prototype had a single 12-volt battery on the bulk head. Many of the chassis and transmission components were left overs from the Super 7's and 8's.

The Coventry Climax engines are of the IOE configuration, with a bore of 60 mm and a stroke of 90 mm, giving 1018 cc. Generally a Solex side-draught carburettor was fitted. During 1931 the rear of the engine was supported on a 3/16-inch steel plate spanning across the chassis, consequently the gearbox bell housing was deep and with the starter alongside. Later cars had a cast-iron flywheel housing and a much shallower bell housing, the starter was then repositioned alongside the engine. This arrangement was used on later Super 9s & 10's and on Glorias. The cooling water is circulated by thermal syphon aided by the sloping shape of the aluminium water manifold on the head. The dynamo is driven by a Duplex chain with the distributor mounted at the rear end of the dynamo. A top speed of 60 mph was obtainable with a cruising speed of 45 mph. Petrol consumption in the region of 35 mpg for a car weighing 19 cwt. unladen.

Steering is by worm and wheel, the drop shaft attached to the wheel is on three keyways so it can be turned through 120 deg. to compensate for wear. Also adjustment is provided for engagement of the worm to the wheel.

Transmission is through a single 8+1⁄4-inch clutch plate along with a 4-speed-and-reverse gear box. The hand brake operated a transmission brake attached to the rear end of the gear box. A conventional Hardy Spicer prop shaft connected it to the axle. The rear axle is a worm and wheel with underslung worm, making for a low floor. Ratios 5.25, 5.75, 6.25/1. The brakes are Lockheed hydraulic acting on 9+1⁄2-inch drums with one leading and one trailing shoe on all 4 wheels. The petrol tank is at the rear, unlike Super 7's which had a gravity tank. Fuel was pumped either by Autovac or SU Petrolift.

Suspension consists of 4 semi-elliptic springs on rubber bushes damped by Luvax hydraulic shock absorbers. Cars after 1931 replaced the rubber bushes with bronze bushes and grease nipples. Wheels were of the Magnum type with 5 studs fitted with 4.50×19-inch pneumatic tyres. The car had a track of 3 ft 7+1⁄2 in and a wheelbase of 7 ft 8 in.

There were three significant models on the same chassis, a 4-door six-light saloon, a 4-door tourer and a 2-door 4-seat tourer known as the Southern Cross. The front doors on the saloon were hinged at the front, while those at the back were hinged to the rear. A sliding sun roof was standard, operated by a rotating handle above the driver. Folding rear arm rests were fitted but do not appear on the prototype. The most noticeable differences between 1931 cars and the later models was a change to the radiator surround and different profiling of the front wings.

Optional extras were a luggage rack, chrome bumpers and Stevenson Jacking system. The upholstery was leather cloth with leather seating. The only known Super 9 to have Bedford Cord throughout is the prototype; this also has a smokers vent in the roof which is shown on brochures, but is not seen on any production 9's. Instruments consisted of a speedometer, clock, oil gauge and ammeter. After 1931 a petrol gauge was added, prior to this a fuel tap was incorporated to give a reserve supply. Dash switches consisted of, a dash light, interior light, ignition, and a starter button, also choke and fast running control. External lights switching, battery charge rate, and ignition timing were all at the centre of the steering wheel. 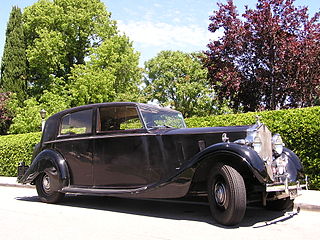 Tilling-Stevens was a British manufacturer of buses and other commercial vehicles, based in Maidstone, Kent. Originally established in 1897, it became a specialist in petrol-electric vehicles. It continued as an independent manufacturer until 1950, when it was acquired by the Rootes Group.

Morris Cowley was a name given to various cars produced by Morris from 1915 to 1958.

The Austin Ten is a small car that was produced by Austin. It was launched on 19 April 1932 and was Austin's best-selling car in the 1930s and continued in production, with upgrades, until 1947. It fitted in between their "baby" Austin Seven which had been introduced in 1922 and their various Austin Twelves which had been updated in January 1931. 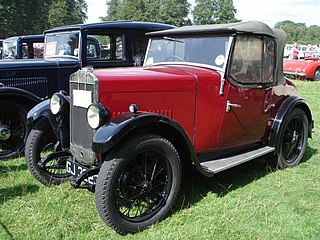 The Car-Nation was a brand of automobile manufactured in Detroit, Michigan, by the American Voiturette Company from 1913 to 1914. 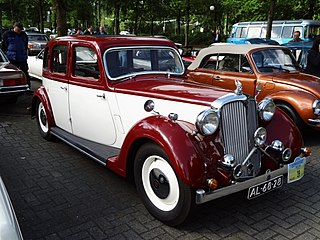 The Rover 12 was a name given to several medium-sized family cars from the British Rover car company between 1905 and 1948.

Austin Twenty is a large car introduced by Austin after the end of the First World War, in April 1919 and continued in production until 1930. After the Austin 20/6 model was introduced in 1927, the first model was referred to as the Austin 20/4.

The Lanchester Eighteen at first known as the 15/18 was announced at the beginning of October 1931. Quite unlike any previous Lanchester it was their first new car following BSA's takeover of The Lanchester Motor Company Limited in January 1931. A medium sized car was a new departure for Lanchester.

The BSA Scout is a small open two-seater front-wheel drive car, manufactured and sold by subsidiaries of The Birmingham Small Arms Company Limited, launched at the beginning of April 1935. On account of its front-wheel drive and low centre of gravity it was said to be remarkably stable taking corners in safety which would be impossible with a normal design. This new addition to the range of small open cars for young motorists was intended to further embellish BSA's reputation for sound design, robust construction and complete reliability.

The Vauxhall 20-60 is a four or five-seater saloon, limousine, tourer or coupé-cabriolet manufactured by Vauxhall of Luton. It was announced on 28 September 1927 with a six-cylinder engine and a four-speed gearbox. A cautious move downmarket. "The first time any six-cylinder Vauxhall has been sold under £1000!" "British & Vauxhall". The initial 2.7-litre engine was enlarged to 3-litres after twelve months.

The "bullnose" Morris Oxford is a series of motor car models produced by Morris of the United Kingdom, from 1913 to 1926. It was named by W R Morris after the city in which he grew up and which his cars were to industrialise.

Midland Electric Vehicles was a British manufacturer of milk floats and other battery electric road vehicles between 1936 and 1958. They were based in Leamington Spa, and one of their major customers was Midland Counties Dairies, to whom they supplied just the chassis, with bodywork being built by the customer. At least two of their vehicles survive in museums.